After a super long hiatus, here I am!! Over the winter and early spring, I was sidelined by an injury and had to go to PT. After missing all my spring races and so many miles, I have picked up training and am getting back into the racing scene again---- I couldn't be more thrilled. I know that running isn't all about the races, but they sure are FUN!!!

About two months or so ago, a friend mentioned that a Ragnar team had couple people drop and were looking for replacements. I was a little tentative at first because I had already registered my nephew and I for a 5k on Saturday of the same weekend Ragnar would be held. I spoke with the team captain, and she said she would make sure I would be done with my part of the relay and could get home in time to run the 5k as well. Sure, sign me up!!!

At the time, the event seemed so far away and then suddenly, I was rushing around trying to make sure I didn't forget to pack anything! Having never done a relay style race before, I was nervous about the time in between my legs and fueling all weekend. I packed stuff for sandwiches, some snacks, and lots of coffee.. and let's be honest, beer to celebrate the completion of each loop!

On Thursday, our crew left around 11:00 am so that we could arrive around the time we were allowed into the campground. There were two areas to camp out- the woods, and not. We wanted to the woods! We had two teammates who brought hammocks to sleep in and the rest of us would camp out in tents. Thankfully, we got there in plenty of time to claim a nice camping spot for the weekend. We spent the evening getting settled and exploring what would be our home for the next few days.

The event started at 8:00 am on Friday and teams started in waves based on team paces. Our team got to start at 8:30 am, so we all gathered around to cheer on our first runner as she took off. We had 8 team member and the basic set up is that one team member is out on a trail at a time, rotating through the Green, Yellow, and Red trails until everyone completed each.

My first loop was on yellow. Spoiler alert: it was GORGEOUS. This loop was about 4.5 miles and took you through a ridiculous amount of ferns. I have never seen anything like it in my life. I knew I had to take a quick moment to acknowledge their beauty before I continued on.

As the elevation climbed, I found myself in awe of these tall pines. They just seemed to go on and on forever and definitely caught my eye, much like the ferns. I was on the trail maybe 30 minutes at this point and was reminded why I took to the trails in the first place. It's so quiet and humbling to just be out there among the trees and the dirt. In these moments, nothing else really matters.

Just when I didn't think I could be more in love with this trail.. there was ... this. I couldn't help but join a few other women who had stopped to check out the dreamy view. Can you blame me? It was pretty hard to tear myself away, but I still had some miles to run. Either way, I was 100% sold on this crazy adventure.

I finished up my loop and passed our group bib off to my next team mate. 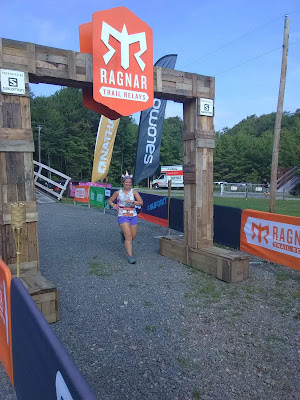 Now that I was done with my first loop, it was time to eat some food and relax because I knew it would be quite some time until my next turn to run. 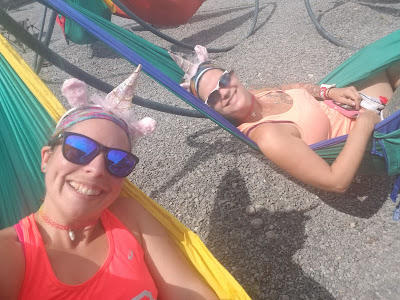 They did have these awesome hammocks set up so Bekah and I snagged some time in them. It was pretty hard to leave... they were so comfortable and the sun felt so good!

Fast forward about 4 hours or so... I am anxiously awaiting my next loop.. green. This is labeled as the easiest of the loops. We had estimated times of each team member's finish time for each loop and we were expecting Bekah to return any minute. Then something REALLY fun happened. They called a 2 hour storm delay. I was pretty bummed because I had planned to run, eat and rest after this loop and now this plan had to change. I ate some of the chicken I brought along and hoped it would hold me over until the new go-time. 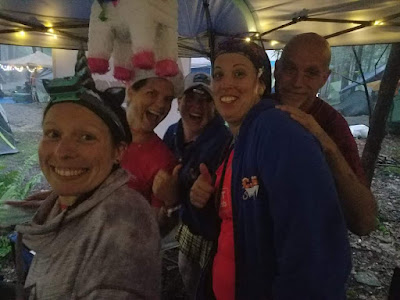 Our team hurried to keep as much of our stuff dry as possible and then huddled under a pop-up tent to keep as cozy and dry as we could in the mean time. Shortly after this picture, I think most everyone crawled into their tents to rest.. except me. I didn't want to risk getting more tired or even frustrated if I couldn't get to sleep so I just waited. As the 2 hours came close to ending, I wandered down to the start and waited for some positive news. Unfortunately, we were told that the race would be delayed 1 more hour while they checked out the trails to make sure everything was safe and then we could return to running.

I went back to the tent to mope and called my guy. Thankfully he let me ramble and vent a little that it would now almost be 10:30 pm by the time I went out for the last loop.. and OH. That I was starving and tired and.. the list goes on. He was wonderful and encouraging.. exactly what I needed as I waited that extra hour. Thank goodness for that phone call. Before I knew it, the hour was almost up and I again headed back to the start area to check in.

We were given the all clear and they released us in waves to run our next loops. I was so grateful to finally get to go!!! By this point, it wasn't really raining, but I wore my rain jacket in case the skies opened up again. I don't remember exactly when, but it started to POUR all over again. About 2.5 miles into the 3.5 mile loop, I thought I was losing my mind. I couldn't see clearly in front of me and thought maybe I was just tired. My second thought was that maybe my headlamp was not clear because of all the rain. Then my tired brain caught up and realized it was just fog. Realizing this did not help the fact that I could not see very far in front of where I was running and this made me nervous about tripping or falling on roots or rocks. Instead of letting this bother me too much, I kept pushing on through the pouring rain to finish my loop. In all reality, I just really wanted to eat my dinner!!

You can't really tell here, but I was a MUDDY mess. The race crew told us to run through the mud and puddles rather than around and risk expanding the trails. No problem!!!

My cold pasta dinner tasted pretty darn good after a nice hot shower and dry clothes. Even though it was cold, I had been looking forward to it all day and was happy to have it waiting for me after running in the rain.

With the three hour rain delay putting a huge wrench in the remainder of our start/finish times, different team mates had to run through the night than planned. Since I knew I didn't have to worry about my next loop for quite a few hours, I finished my "dinner" and hung out for a little bit before decided to crawl into my tent around 1:30 am for some overdue and much needed rest. Not surprisingly, I passed out quickly and slept for about 4 hours. 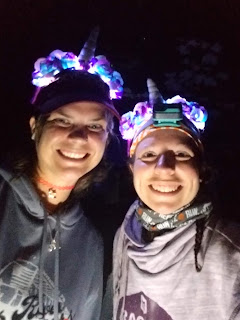 Since we didn't get to wear our light up unicorn horns for overnight loops as planned, we decided to wear them before the sun came up Saturday morning. Aren't we cute? It was super fun wearing unicorn garb all weekend- we made lots of extra friends!!

I quickly decided I needed some legit breakfast. Unfortunately, it wasn't really ready yet, but PIZZA was sooooooo... obviously I ordered one stat. It was completely delicious.  I think it was around this time that we found out the Ragnar team was forcing everyone to double or triple up with team members on their last loops to make sure everyone got to cross the finish line on time. One more roadblock but we got our plan together and were ready to crush the rest of the day.

After my stomach was full and my brain was (mostly) awake, I decided I needed to try to figure out a way to get my shoes at least semi-dry before I ran my last loop. There were shoe dryers available but they seemed to all be full. I didn't really want to keep standing there waiting and then saw all the shoes laying by the fire. SCORE!! I grabbed myself a spot and waited (not so) patiently for them to dry by the fire. I knew they were just going to get wet and muddy again.. but there is a certain comfort in starting out in dry shoes.

Last stop: Red loop. I was originally slated to do this loop around 2:30 am, but was really glad I got to see it in the daylight.

These rocks were breath-taking for some reason. I had to stop and admire them of course!!

It is a little hard to tell by the picture, but this was a pretty big rock that we had to kind of scoot down to continue on the trail. We heard stories about this section all weekend and it was fun to finally see what the big deal was. We agreed that it would definitely be a very different challenge in the dark.

The mud was just incredible. I tried to take this while running so of course it was blurry. We had a pretty great time running through the mud and splashing through every puddle we could possibly find.

As you can tell.. I was pretty happy with my mud collection. I would 100% do that again. 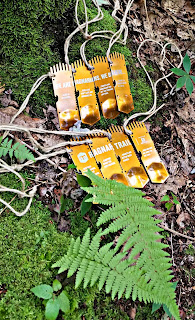 These are by far the coolest medals ever. Each one says something really cute and they all fit together just like our awesome team. We faced quite a few challenges on this trip, but we all rallied every single time and showed up for each other. We had each other's backs no matter what. That's what it's all about. 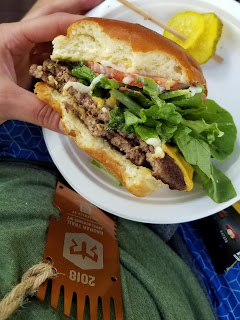 And then there was this freaking burger. The end.