I dont really like the treadmill... I have said this before, and I have  no shame in saying it again. Seriously. But there is only so much PA cold and (scattered) snow this girl can take this year. Plus, I am trying to be a better.... athlete? Not sure I am comfortable using that word to describe myself even though I have been running regularly for a year and a half now. I never even considered it until the other day at work I overhead a girl on the other side of one of three cubbie walls talking about a burger. I jokingly asked her where mine was and she joked back saying she asked if they had one for me, but that they didn't because she didn't want to influence me "being an athlete and all." So weird to hear that.

Anyway, I wanted to share this really awesome stinkin workout I did last night on the treadmill. Yes, I did use the word awesome and treadmill in the same sentence. Another weird thing. So before I show you the picture, I'd really like to preface that I did not feel like the original version was LONG enough due to the fact this workout is 20 minutes and I usually run 3 miles and it is closer to 30 minutes. In order to do that I increased the time of each part of the excercise. 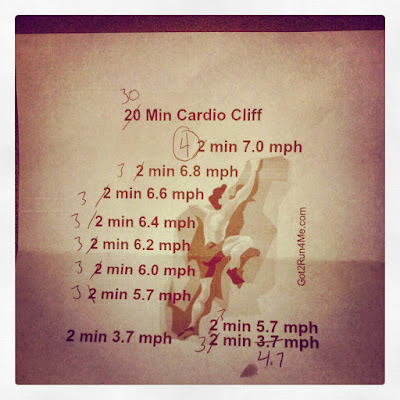 Like how I did 4 minutes at 7MPH?? I wasn't sure that I could do it, but knew I had to and that I could at about 2 minutes. YOU GOT THIS!

What could you do, if you stopped telling yourself you can't??