So over the weekend we visited my sister and clan. My parents were up too so it was a full house.

So who is my new running partner?? Well certainly not my dad.

I went for a 2 miler (which feels like about 5 in their town) on Sunday morning. Sunday evening my mom had mentioned going for a walk and my 6 year old nephew pretty quickly replied that maybe we could go for a run. So we did run block by block, pausing to wait for my parents and his next youngest brother. He did really well and even made a weird comment about how he had to pee and while he was running it was ok, but when he stopped, he could feel it go up into his belly. Kids say the silliest things. 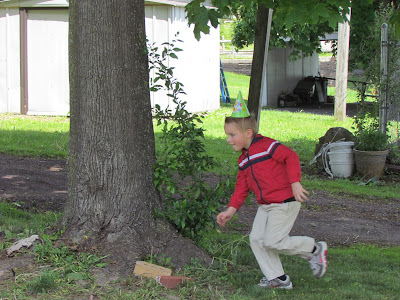 This is actually him in action playing tag with friends at his birthday party on Saturday, but running nonetheless. Monday after we had a late breakfast and ran some errands, he said "it would be cool if we went for a run." Who am I to say no? We got changed and told my dad to bring the 2 y.o brother down the school playground we we would wait for them there. It is about a half mile down to the school and my nephew was a super sport and we kept about a 10 min/mile pace there. They played at the playground for probably a good hour and then we ran another .75 mile, not quite as fast, but it was much hillier.

So yep, found a new, albeit mini, running partner. He was also excited at the thought of kids fun runs they do at 5ks. They will be within an hour drive again in a matter of months, so this might be a reality next summer if he continues his enthusiasm for running. He is really such an amazing kiddo and melts my heart (most of the time!!)

Have you run with anyone new lately?