While I have been super MIA, I have definitely been busy. Last week was a fun one which I will share about later this week, but for now I want to share my fun race experience from the weekend.

This was a race I haven't said much about at all and I am not sure why. I guess because after the fun and excitement of The Color Run, I have just been focusing more on building mileage for my upcoming first ever, half marathon.

So that being said, this Saturday I ran for the Penn State Chocolate Tour which had all different distances of biking, 6 mile walk and 6 mile run in addition to a half marathon relay. I stuck with the 6 miler as a good training run for my half. 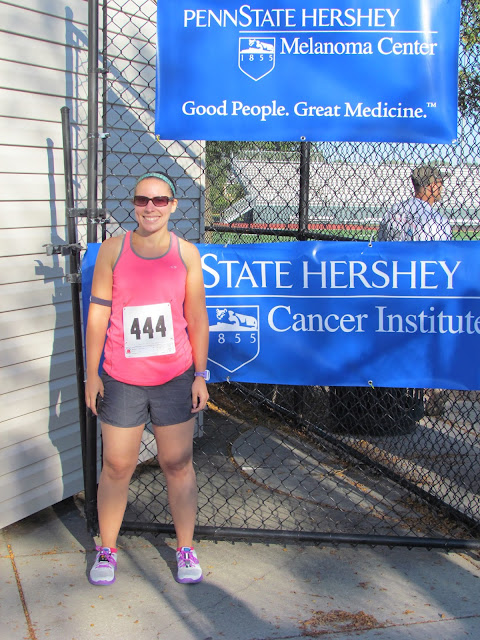 Excited for the start after not the greatest sleep AND having to turn around 15 minutes into the trip to get my garmin. We were seriously almost half way there and I was like OH CRAP! I don't have my watch, we need to turn around. Call me obsessive but seriously my heart sank to my stomach when I realized it. I thought for a literal second about just calling it a wash, but I squashed that fast and asked my dad to turn around. Luckily, we left with plenty of time that we turned around and still got there by 8. The run didn't start until 8:30 so I was golden. 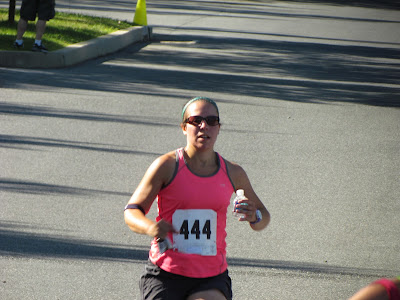 Very interesting picture of me coming across the finished line. My parents and husband had taken a little over a 2 mile walk, hoping they would catch us at some point on the course, but made it back about a minute before I crossed the finish at 53:41. And speaking of obsessive, I was kind of  really irked that this run was only 5.75 miles. Is that ridiculous of me? Don't get me wrong, I really liked this run (even though it was mostly a big uphill) because we ran all over Milton Hershey School's campus. It just bothers me a bit when a race isn't really the actual distance it says it will be. Back to the hill situation, this definitely wouldn't have bothered me so much had I not been an idiot and done Turbo fire 20 minute HIIT workout on Thursday night. Worst. Idea. Ever. I should have never touched it anytime during the week before this race. Lesson Learned. Turbo Fire HIIT= PAIN! Good pain, but none the less pain. 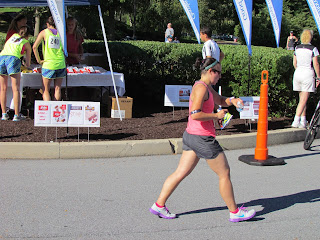 Checking my watch (of course) 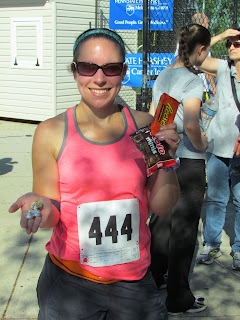 Me with some of the delicious Hershey candies from during and after the run. It was pretty darn cool having water AND chocolate treats at each mile (ish) but a little hard to carry with hot sweaty body parts. All grossness aside, I really liked this run. It was something fun and different and this was the 3rd year out for this event. I think they did a pretty darn good job. The route was very well marked (an improvement from last year I gathered) and the volunteers along the route were nice and friendly (big plus!!) 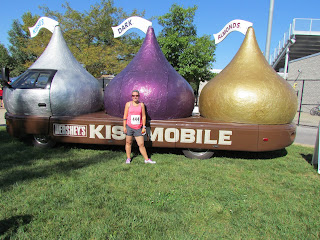 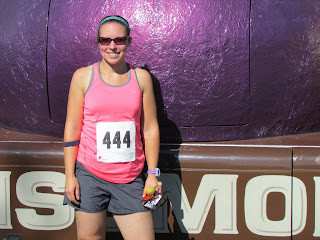 Especially the purple one 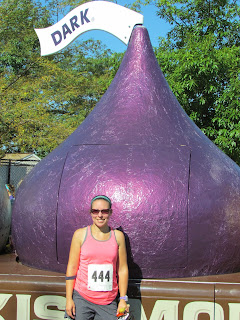 The weather was beautiful, my parents and husband came out to see me, and I got to run. What more can you really ask for? Do you ever run a race and just feel so blessed and content? Yes, I do.

I would definitely run this race again. The race fee was $30 and it was most definitely worth every penny. In a preliminary count, they said they raised about $48,000 for melanoma research. How amazing!!

Did you race this weekend?