As you might know by now, yesterday I ran my first half marathon. This is so huge for me and something that makes me smile to know I completed. Just a year ago I thought my max mileage to run was about 6 miles. I proved myself wrong this past year and signed up for this half marathon the day sign ups opened- back in May (here).

The last two weeks my training went WAY down thanks to some strange pains in my lower left leg and some in my right arch. I figured I'd rather rest and do my best race day, than continue to ATTEMPT training runs and increase the damage.

Race day came and I was feeling pretty darn good. I still wasn't sure if I was going to be able to run the entire thing, but mile by mile I completed this half marathon. There were a few times that I wasn't sure how I was ever going to make it. I would be lying if I said there weren't times that I wondered if I could take another step. I would also be lying if I said it weren't worth EVERY minute, every twinge of pain and every single training session.

To be able to say I have completed my first (and not last) half marathon makes me extremely proud. I trained hard, ate well and enjoyed (most of) the journey. I got to share some of my long training runs with friends and some on my own- both taught me a lot about myself.

But enough about that.

How was the race itself?

I woke up at 5 AM Sunday morning to get dressed, stretch and have a protein shake. I have historically not done well during long distances with much more than this so I decided to stick with it. I had laid out all of my STUFF the night before so I was very well prepared and didn't forget anything!! Awesome. We arrived around 6:45am. I was so glad we went the way we did, they were letting people park in the employee parking lot so we didn't have to drive the usual "tour" of all the Hershey entertainment places to park at the stadium. 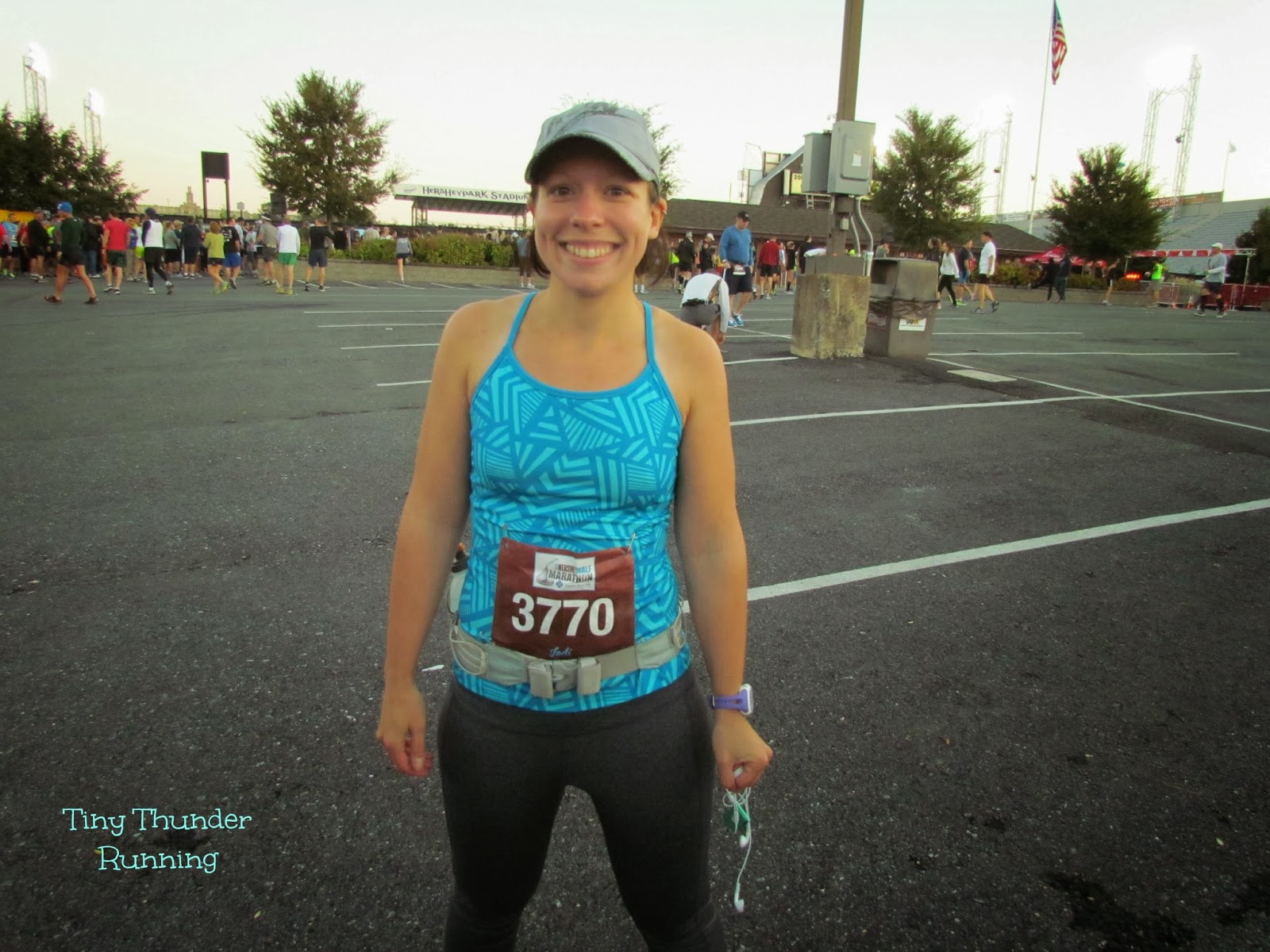 This is about 10 minutes to start after we waiting forever for one final bathroom trip. The entire time we kept saying "man we should have gone to the ones right by the parking lot." Oh well, lesson learned. I was definitely glad I took the time to go.. haha sorry, TMI.

Anyway, I had hubby quickly take this picture and then off we went. I guess I was concentrating pretty hard around mile 3 when this picture was taken :) In all reality I think I was focusing on my breathing since the first 3 miles I was intermittently dealing with a stupid side stitch. I just kept telling myself to breath and relax. After this is when (I think) we ran through Hershey Park itself. I say I think because after running I really couldn't remember the order of certain areas we ran through.

Running through the park was a challenge for two reasons: it is full of hills and they had sprayed down the walkways where we were running.. DUMB IDEA guys. It is a little hard to run with confidence when you are also fearing you might fall flat on your bum. On the upside, running through the park was much easier this time than back in April when I ran Hershey 10k.I will take that as a win. At some point after the park (somewhere around 5 miles I think) I lost my running pal, slowed to a walk and grabbed my fuel pouch then picked up my running again.

After the park, we ran through a few other neat areas of Hershey- including the Hershey Country Club and Milton Hershey School. I also ran another part of Milton Hershey back in August when I ran Hershey Chocolate Tour, 6 miler. The half marathon involved a different end of the campus as well and we were so wonderfully greeted over and over again by the smiling faces of all the beautiful kids that live there. Seriously almost brought tears to my eyes a few times to have the support of these kiddos out there for high-fives and holding up signs for all of us. It didn't even matter that they didn't know me or probably the majority of the runners but it was so sweet and touching. There were also some other signs and people along the way that were inspiring and helpful to JUST KEEP GOING. 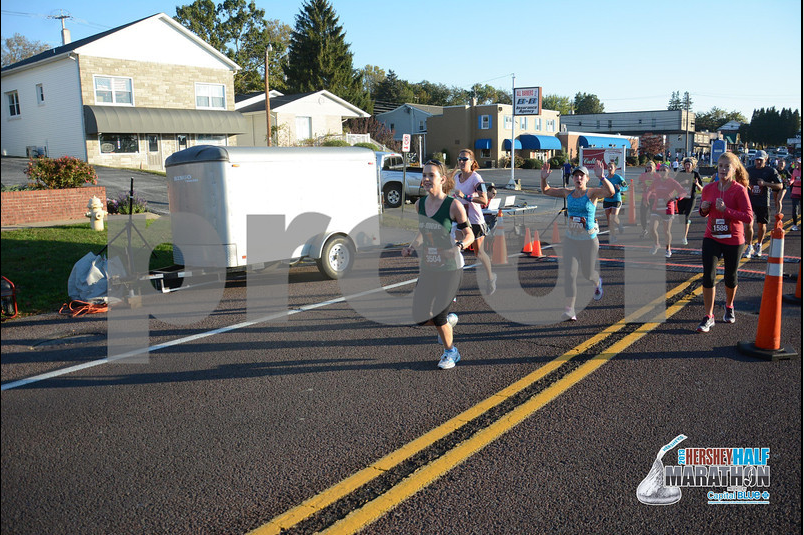 This picture was taken at almost the half way point I think. I think this was about to the point where that half marathon relay teams were switching off which was at 6.7 miles. I was excited to see a photographer because I am pretty sure I missed others so what else to do, but throw my hands up and look like a maniac? Haha. 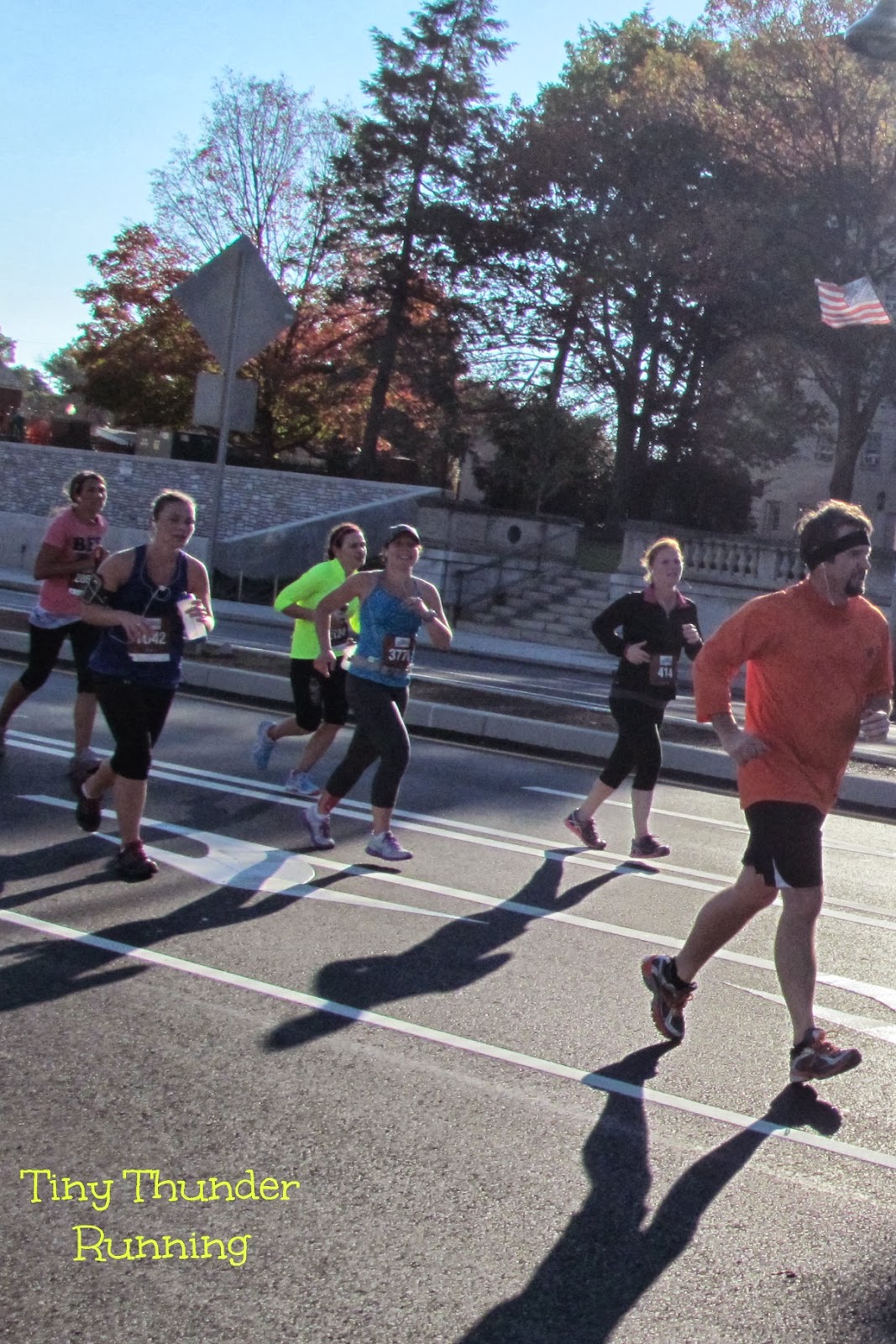 I shouted out to my husband in time for him to snap this photo at a 10ish mile marker. I was SO happy to see him. Call me crazy, and I think he thought I was when I told him how I happy I was later, but sometimes you just need to see someone you know and love along that long course.

Somewhere between 1-2 miles to go, there was a guy holding a sign that said "Keep Going/Keep Going/That's what she said" I enjoyed it so much I even yelled out to the holder of the sign. It made him smile, it made me smile and gave me some more umph to keep going. And that I did. I finished with a time of 2:02:47 and was so happy with that. I was hoping for 2 hours or under and still cannot be unhappy with my results. I didn't have any perfect or negative splits but my average pace was a 9:20 so I can't complain there either!! 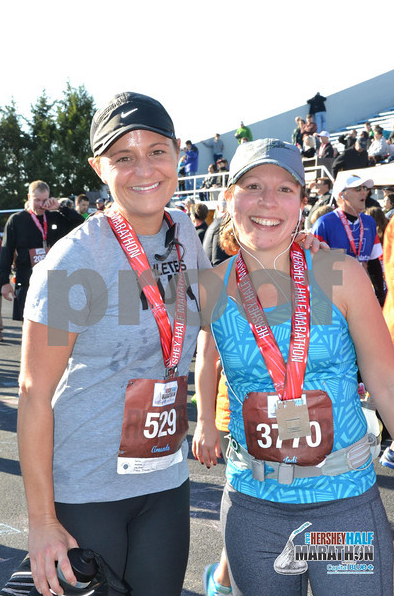 Me and my running partner in crime. We ran quite a few of our long runs together. We split up before the halfway point because I just started to loose steam and then she got too far ahead and I was unable to catch up. Initially I began to doubt that I would make it without someone running with me. Then I remembered, DUH, I am running with 5000 people and I am not alone by any means. I was quickly greeted by Amanda when I crossed the finish line and we got this great picture of s together.

We walked back to the cars and had my husband meet us there so we could get our warm clothes back on. It was still pretty chilly (I think in the 50's) and rather windy too!! While we were doing this, I got a text from a friend that I had run past her cheering for me and I told her we were going to come back in. Sadly, they were too cold and left by the time my husband and I made it back in.

I did get to see a few others though so that was fun too :) 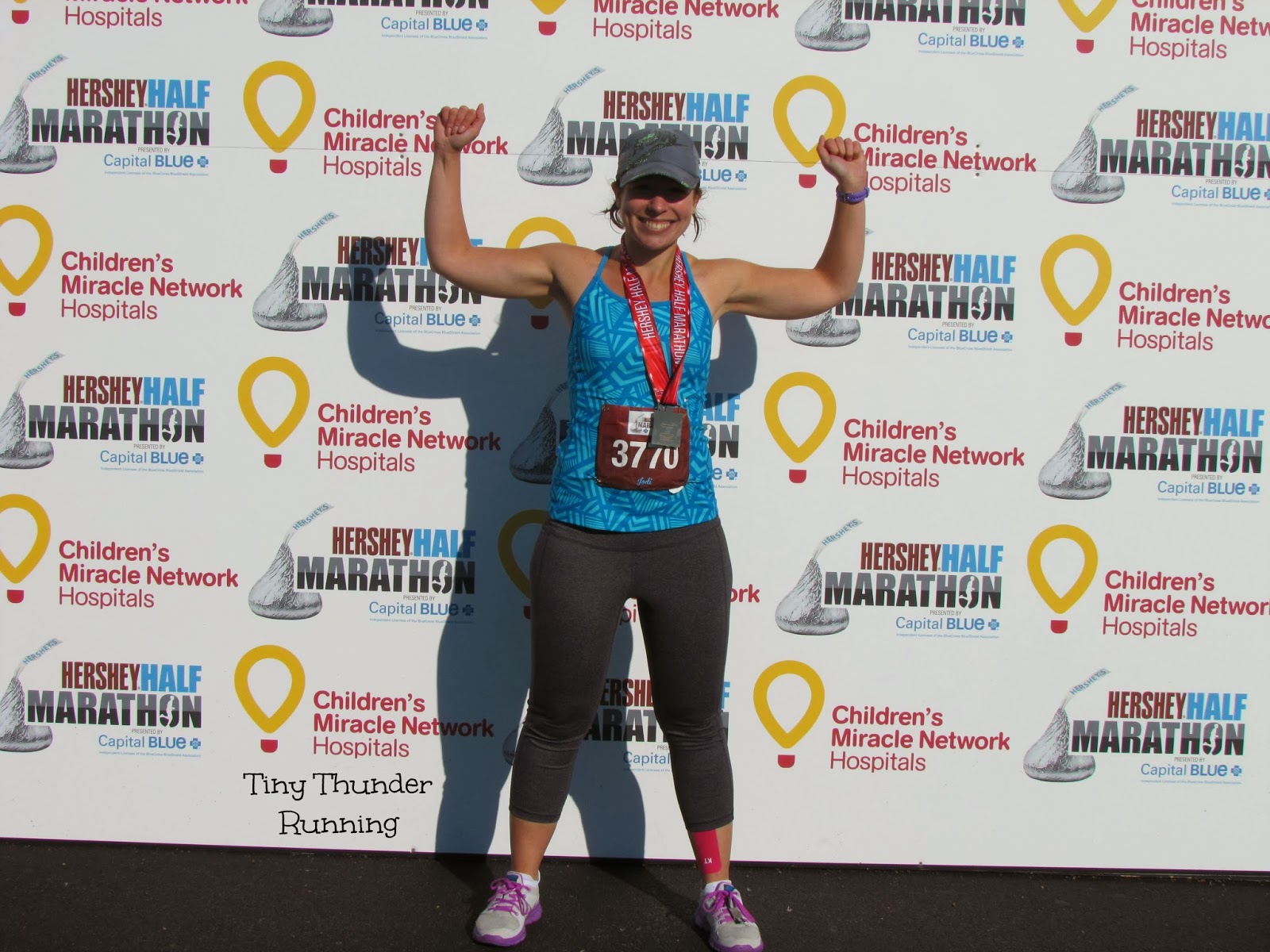 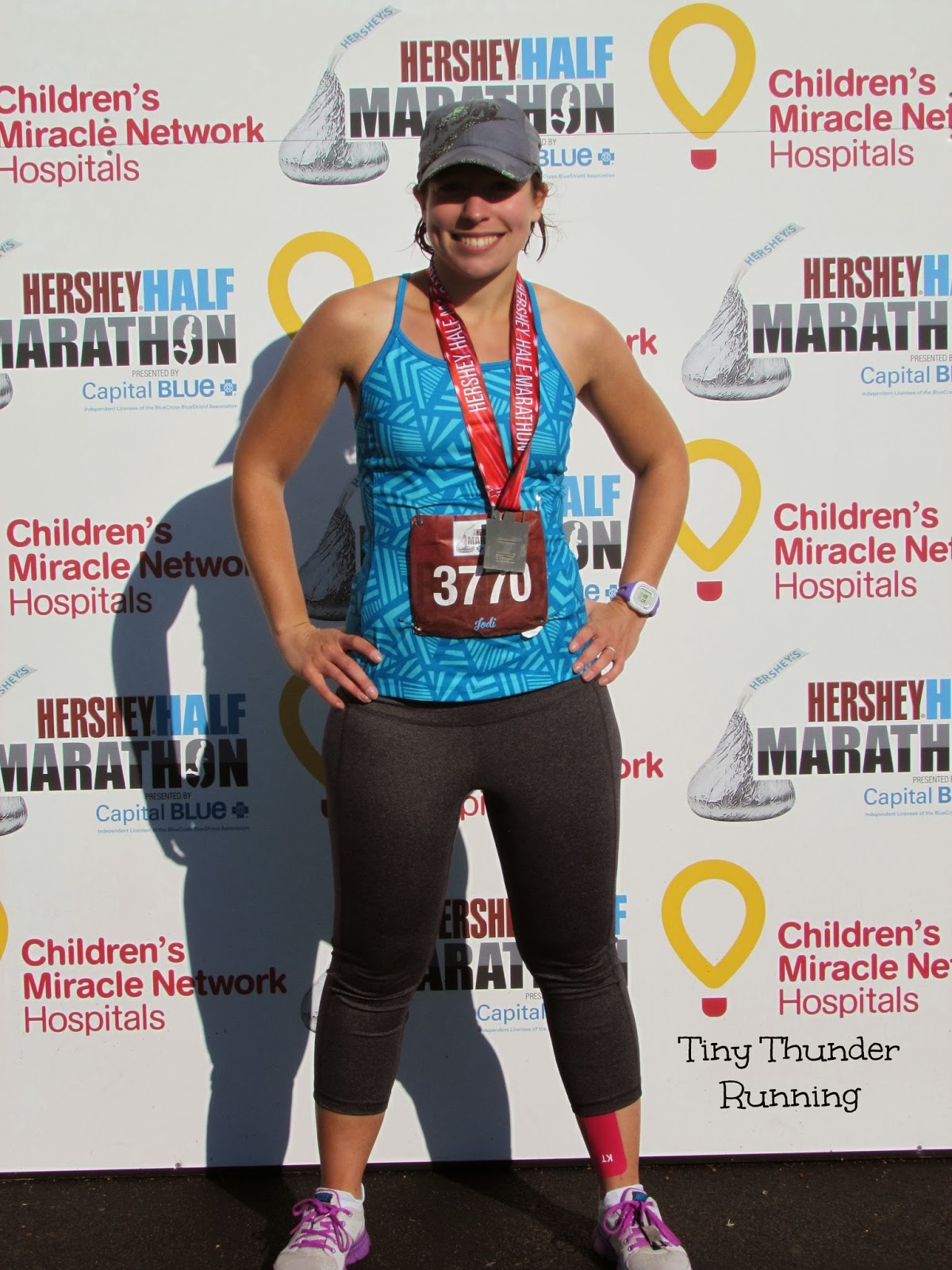 I was so happy to be able to say I completed a half marathon. It should be noted that I was SOOOO cold when my husband took these last two pictures. It was so windy and we left right after.  We headed straight to Cracker Barrel where I tried to devour pancakes and bacon but I didn't get too far thanks to annoying digestive system issues but such is life. I enjoyed breakfast with my husband then we headed home for some rest. We also got 2 free tickets to Hershey Park in the Dark (their halloween special hours) so we went to that as well.. more on that later!!

Did you race this weekend?? How was your first half marathon?