Wow its really been almost a month since the marathon and even longer than that since I last posted here. I guess that goes to show the speed of life and that lack of motivation to sit at a computer after 8 hours of such at work. At any rate, I am FINALLY here to share the experience of my very first marathon.. and (spoiler alert) not my last.

I hate that it has taken me so long to sit down and write and hope that I can still channel and remember it all. Okay, yep. Apparently my emotions remember as I just got teary-eyed. Wow.
So the Saturday afternoon prior, my sister arrived with her kiddos and I spent the afternoon running around after and entertaining them. This actually worked out pretty great because I didn’t have much time to worry or freak out that the very next day I would be doing something so crazy as running my first marathon. I decided to keep telling myself it was no big deal and that it is just another long run. (really, that’s it.)
Saturday evening I made sure I had all of gear for before, during, and after the race set out and labeled (if family members were responsible for them) so that I could have a smooth morning... just like training runs!! I hope to write a more detailed post about what I used to fuel this run later- primarily it included my two favorite things. Energybits and Pocketfuel. Once I was satisfied that everything was how it needed to be, I went to bed. I even SLEPT!!! This blows my mind because I never sleep the night before races. Maybe I had enough other weird dreams in the weeks leading up to the marathon that my mind was at ease.
Sunday morning I got up, got dressed, had my little multi-grain bagel with peanut butter, grabbed my gear and headed out the door. No stress, no craziness, no forgetting ANYTHING. It was just how I wanted it to be. 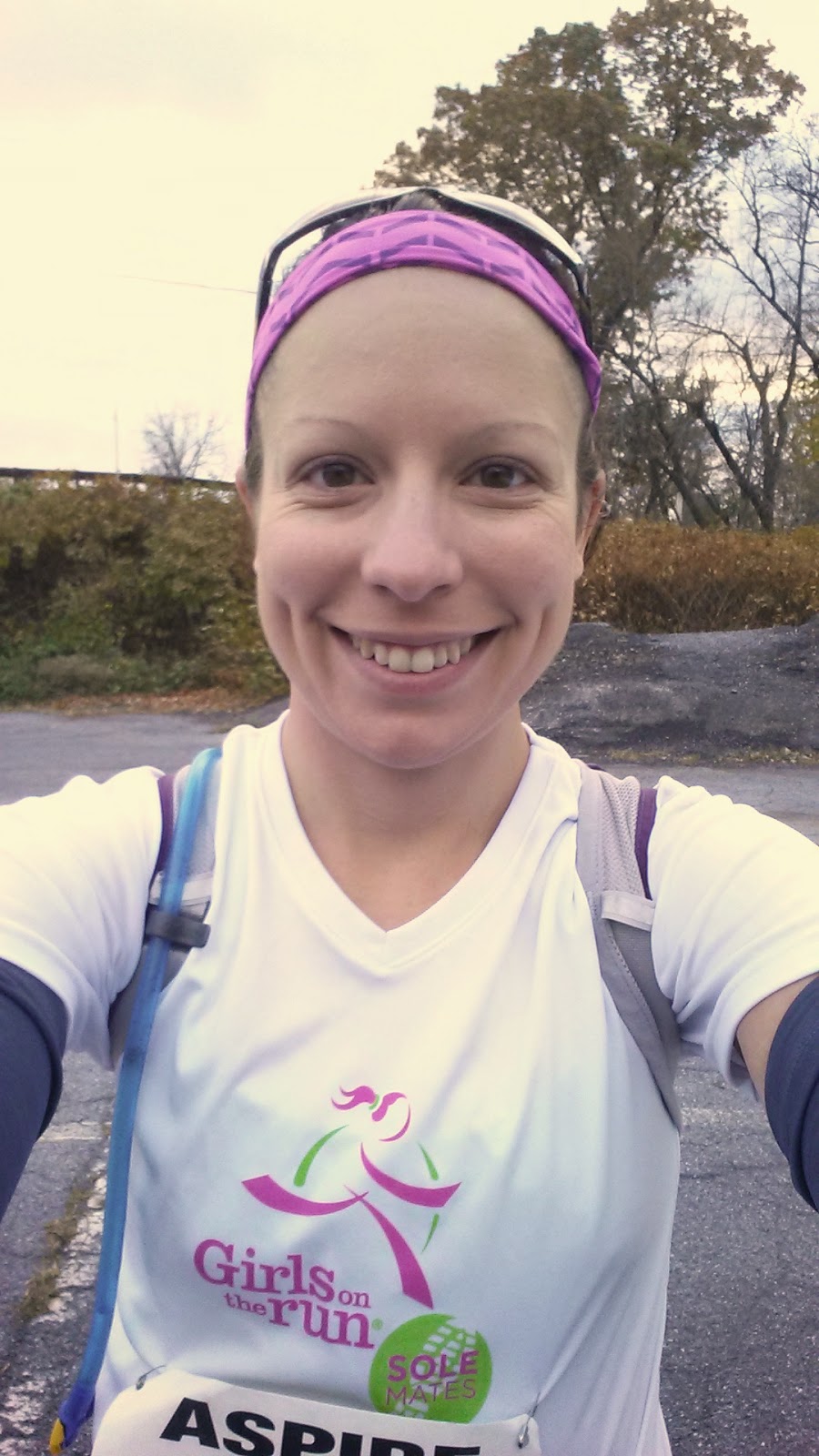 I arrived at the parking area shortly after 7 to have plenty of time before the road closed at 7:30. I claimed my parking spot and people watched a little while I stayed warm in my car for just a little longer.  Closer to 7:30 I decided it was time to get myself ready and head to the porta pots for one last shot before heading to the Start line! I ran into quite a few familiar faces when I did and was happy to see them all. Even got this nice pic with one crew.

I headed over to the start line and wandered through the crowd to find my newest running partner with whom I shared that last few long training runs. Marni and I shared an 18 and 20 mile run. I was so thankful that I found her and we were able to run together at a decent pace. She was such a blessing during this process and every time I saw her in the taper weeks she greeted me with a huge hug!
Back to race day- I started with Marni and we kept a pretty good pace together. Our original plan to stick with a pacer was shot down pretty quickly when we realized they must have planned to take off like bats out of hell to compensate for a slowdown later.  We weren’t feeling it so we did our own thing. The crowd support was awesome and it definitely helped that we knew A LOT of people. We got to see our River Runner friends and local Team in Training friends too as they both manned a water station.

At mile 6, I saw the first person that was there JUST FOR ME. And I completely LOST IT. Like bawling, can’t breathe, can’t see, LOST IT. At mile 6 I saw Julie, a coworker who I have known for about 5 years and through two jobs. She was so sweet and came out all by herself to cheer for little old me. She even came manned with two signs.

After I got my crap together and my breathing back in line, I was good. Crying is not conducive to breathing while running a marathon.  Just sayin.
I was able to stick with Marni until close to mile 12 at which point my right glute was not being my friend and I needed to walk for a moment to try and stretch it out. This didn’t really help. I got to see my family shortly after which was tear inducing as well and I unloaded my arm sleeves because I was too hot.
I was able to hold on pretty well until mile 13 when I met up with one of my Solemates from Girls on the Run, Anne Marie.  After I met up with her, there was a long stretch of nothingness until the next exciting area. I struggled to run all of this section and walked/stretched as needed.
I was excited when we FINALLY reached our local community college HACC where I got to see my family again and got some little munchkin kisses and smiles. I felt so bad because my husband didn’t have on his jacket and I totally almost missed him standing a few feet away. That’s what 16 miles will do to ya. Tunnel vision, yo!

We looped through campus and out of the other side was Julie again. This time a different sign and I didn’t let myself freak out as much. I yelled love you as I passed because I was so happy she (and everyone else was there).

I also saw another Solemate and previous Team in Training running mate throughout the course quite a few times. I loved seeing everyone’s smiling faces all over the course.
Up next was the part we all knew and hated. The hills of Wildwood Park. I really wasn’t worried about them until my glute issue because I had practiced them many times at mile 18 just as they would appear on race day. I did also get to see another friend and coworker in the park which made me smile.

As luck would have it, the glute did not like how those hills pulled at it and made this part of the course much more difficult than I anticipated. I ran when I could and walked when I couldn’t. I got to the last hill and decided I’d had enough. I told Anne Marie I was sucking it up and killing the last hill. So I did.
After conquering Wildwood, Kelly, who actually is the one who got me involved with Girls on the Run, met up with us as well. Anne Marie stayed with us for a little bit and then Kelly stayed with me to the finish. It was really great having them both with me as a support and someone to keep me company. Neither of them made me feel bad for having to take walk breaks and just kept encouraging me along the way. This is so helpful to keep me from getting upset that my right leg just didn’t want to RUN! I mean I was irritated but never got upset.
Once we saw the bridges that signal the race was ALMOST completed, Kelly really kept me going. She even suggested some run walk intervals to make up time. At this point, the course was pretty flat so I was able to do this. The last portion of the race had us go on the path right down along the river. Again this was flat, but there were times that I need to walk due to the pain in my... glute. As we got closer to the Walnut street bridge and the little hill before I crossed the bridge back to the island and finish line, Kelly continued to encourage me. I decided I would conquer the last hill and enjoy the run across the bridge to the finish. The awesome crowd support from family and friends standing on the bridge as I passed under was very helpful too.

I climbed that one last hill with confidence, rounded the corner to see my family, and grabbed the arm of my 7 year old nephew to run the last quarter mile. I was so happy to have him by my side to finish the marathon and would do it all over again. I learned later that the (almost) 4 year old tried to come along as well. Had I known, I would have gladly brought him along too.

I was greeted by so many friends and my family at the finish that I broke out in tears and sobs ALL OVER again. Hugs, smiles, and tears of joy, happiness, and gratefulness. That's what it's all about. Exhaustion, happiness, tears, sweat, and so much more. This post is already getting super long so I am going to stop. But the reality is, I could go on for days. The emotions and how it feels to not only run but complete a marathon is just unbelievably amazing and liberating. To see these people who care about me all over the course and at the finish line was truly incredible. I really couldn't ask for a more incredible support system. Before I continue to ramble even further, I will leave you with this quote that I have found to be abundantly true.