We could be heros...

While everyone else is recapping out their 2014 race years (and some 2015 races already!!) , I realize I have never even recapped my last 5k of the year which occurred all the way back in November! This is not because it was anything short of amazing rather it was followed very quickly by my first marathon and then before I knew it the holiday season was among us.


Before I officially recap out my year, I want to share the lovely race that was the 2nd Annual 5k Hero Run. I attended this last year as a new race and as part of a trio with two of my co-workers. We had so much fun we decided to go back.


This year the theme was “HERO RUN RETURNS” and based on the batman logo. It was pretty clever and at check in we received our long sleeve tech shirt PLUS a pretty cool fruit diffuser water bottle.

I stole this pic from one of my running mates.. shhh.

But that was not the end of the cool-ness. Of course because it was a hero themed race lots of people dressed up as many different things. We were dressed up as wonder women and saw many other super hero costumes as well as some really neat original ideas. They had awesome PUMP-YOU-UP music playing before race start which was wonderful considering how cold and windy it was. We jumped and danced trying to get (and stay) warm.

The course was pretty similar to last year, but did have us loop through the nearby mall. Although this was cool and the warmth initially felt great, when it was time to go back outside into the cold it was REALLY hard to get my temperature and pace groove back.  I was pretty overheated and had a moment of exhaustion, but kept trucking on and finished out at 27:47 for the course that was 3.01 miles (according to my garmin) with my official time being 27:45. We even made the local paper's online edition!! Aren't we adorable? 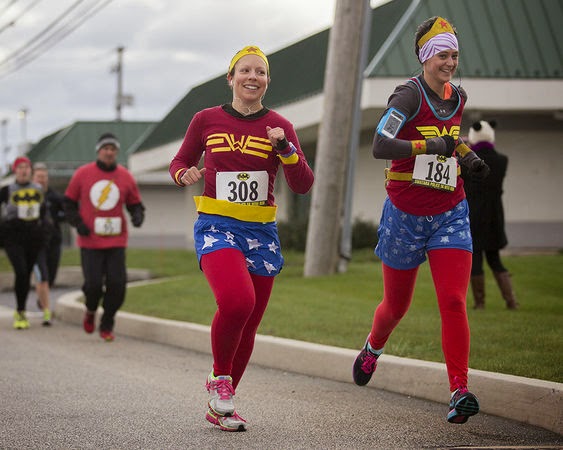 Either way it was a super sweet day.. oh yea and I almost forgot another super awesome addition to this year’s race… a photo booth!!!

Other than the rude lady manning the door/entrance to the photo booth area, this was a super awesome addition. We had such a blast being completely goofy and giggling like little girls.

Do you have a favorite race you will attend year after year because its SO FUN?!!?