Yes! I did it. I completed my 4th half marathon and my 2nd for the year.

I knew it would be a tough one as it was rumored to be hilly. It most definitely did not disappoint.

We arrived Friday to get our "packets" which included our race shirt, a nice drawstring bag with the races logo, and some other odds and ends. There was also a digital coupon guide that was emailed to us. We paid our money for the all you can eat pasta dinner and ate as much as our bellies would let us. 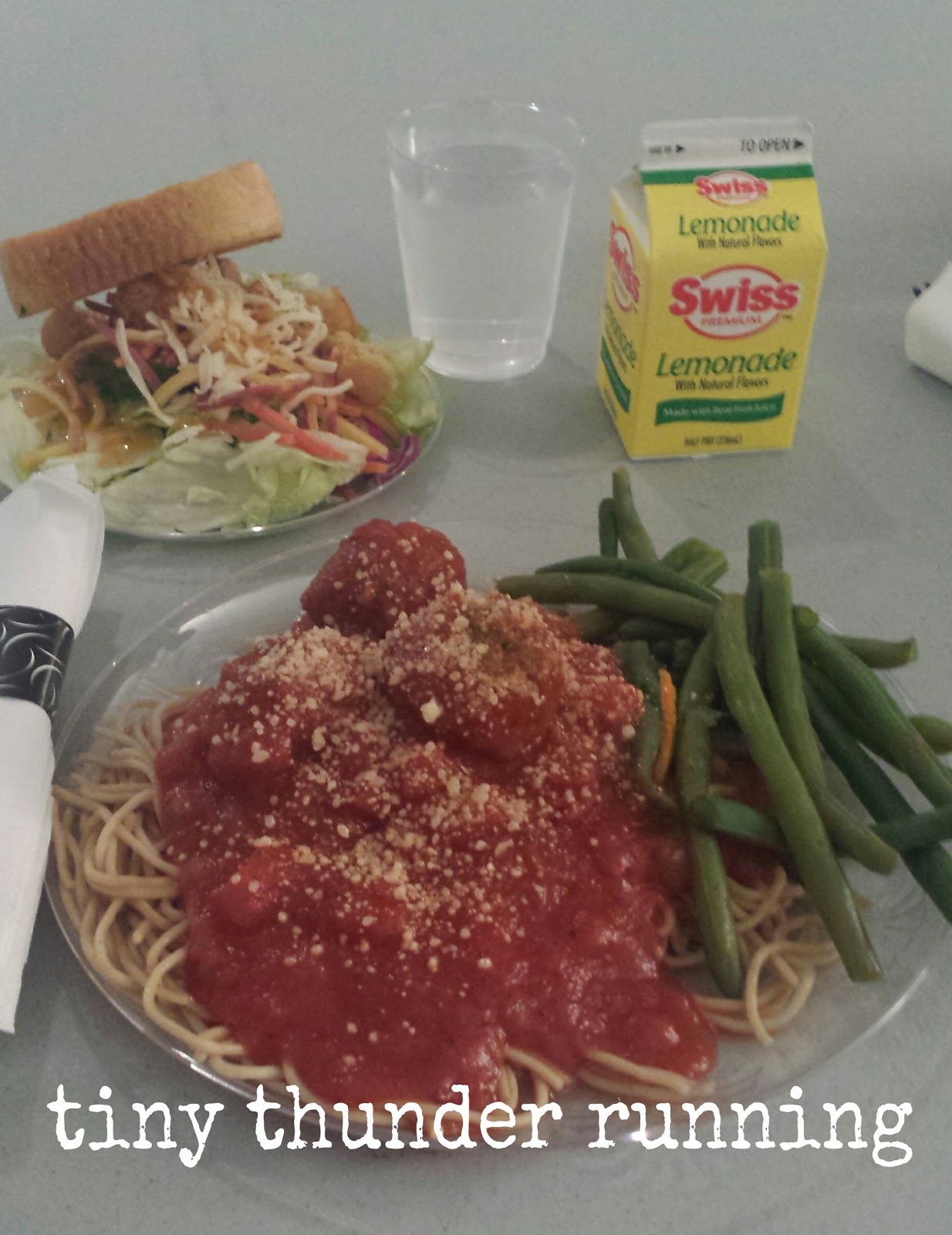 Once we couldn't eat another bite, we loaded back into the car and headed to our "home" for the night. It was about 15 minutes away from the race location and pretty inexpensive. Neither of us slept well  and we seemed to be able to hear quite a bit of noise from the neighbors, which was a bummer. But it was clean, warm, and an easy place to get to. It was an older motel and each room had a little area of the balcony and a beautiful country view. 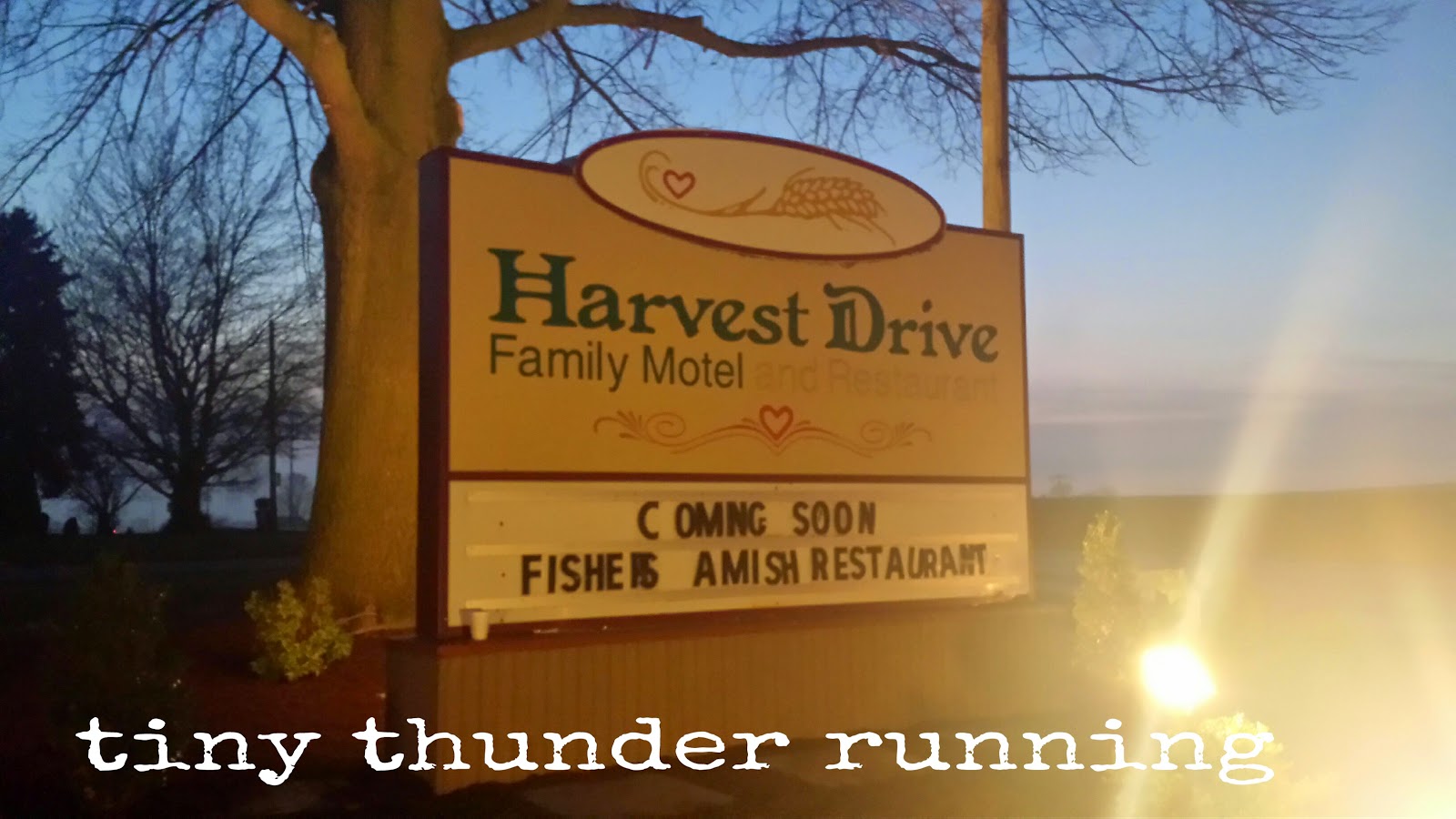 Saturday we woke up shortly after 6, got our race gear on, had a little to eat in our room, checked out and headed back to Garden Spot Village. We decided to get there close to 7am, since that was what was recommended. There were already TONS of people there.

We sat in the car until right before 7:30am and headed to the porta-pot line. Turns out, we hit the jackpot! We were in a shorter line for actual bathrooms in the pavilion! We headed to the start line at 7:45 am and just  waited for the start. It was pretty cool that the full and half marathoners all started together. Starting with a pacer turned out to be a bad idea again. Our first two splits were 8:50 and 8:52. Mile 3 I decided a slow down was necessary. My splits were ALL over the place. Magically, they are exactly when the big old hills made their presence.

As with many races, so many thoughts went through my head during this 13.24 miles. Every time I thought a hill was going to get the best of me, I remembered the motto of my friend's mission 4d5k- I run for those who can't. There are too many people out there who CAN'T run. I get to run. I must run up this hill and beyond for them.  I wore my button on my camelbak and touched it a few times when those "I can't" thoughts came into my head.

Another awesome part of this race had nothing to with the race itself. It had everything to do with an amazing 11 year old girl that I ran off and on with for about 3 miles. I first saw her right after the HUGE hill around mile 8-9. She was chugging along and I asked her how old she was. I immediately told her that she was doing an awesome job. This was her first half marathon and she was running with both her parents, who were behind her somewhere. I told her she is amazing. I told her I never had a thought of running let alone a half marathon at her age. She told me that initially she wouldn't have and then one day she decided to. I again told her she is amazing.. that this was my fourth and it was kicking my butt! And ya know what? She finished. She came in about 10 minutes after I did. Just something about this that inspired me so much. I don't even know this girl and I was beyond proud of her.

After I lost my 11 year old partner, I soon gained another. There was a guy who I had seen quite a few times through the course of the race who was walking around mile 10. When I came by, he joined me and told me that I was going to take him to the end. I told him it might be the other way around. Turns out, around mile 12 he needed to tie his shoe and I didn't see him until after he finished. We had a good 2 miles!

This course was actually 13.24 miles so I finished at 2:10. Not the finish I had  hoped for, but between the hills at the wind, I can't be anything other than proud of myself. This was a really hard and beautiful course and had an elevation gain of 741 feet, according to Garmin. It was a huge challenge and I loved every moment. There were so many ups and downs that you couldn't really keep up with the miles as they ticked away. At least I couldn't. 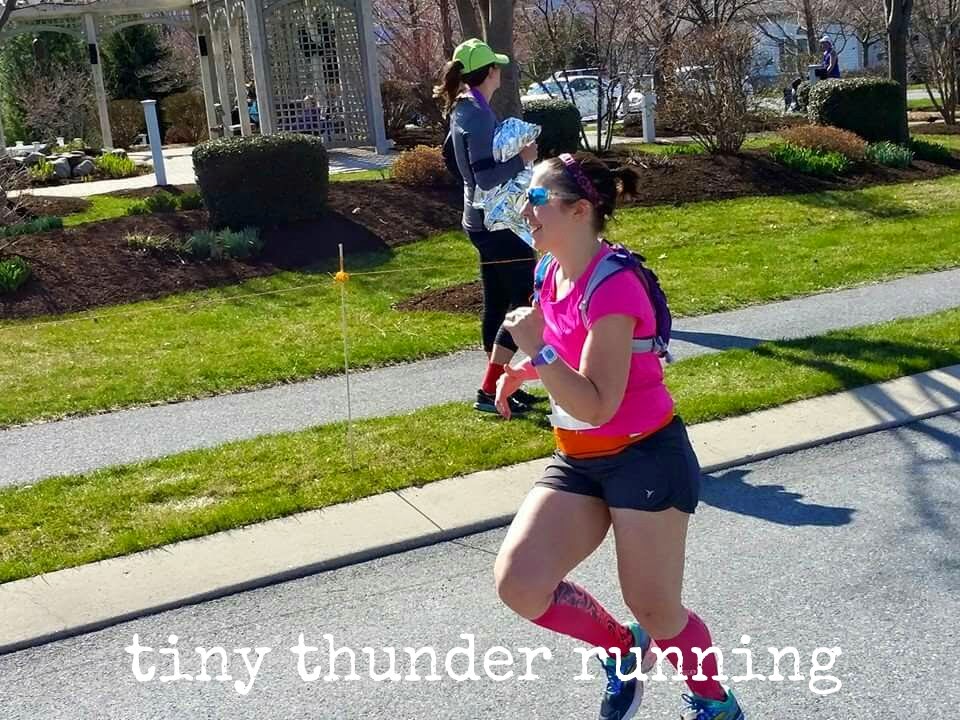 This shot was taken by the husband with about .1 miles to go. Right after seeing him and my parents, I got a little jolt of energy to kick my butt right to the finish. 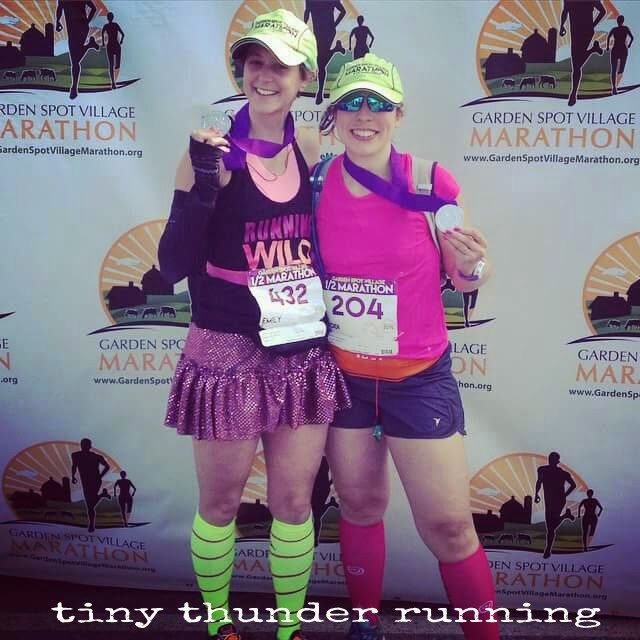 Showing off our bling for a few photos on the awesome GSV backdrop. I love when races have these. 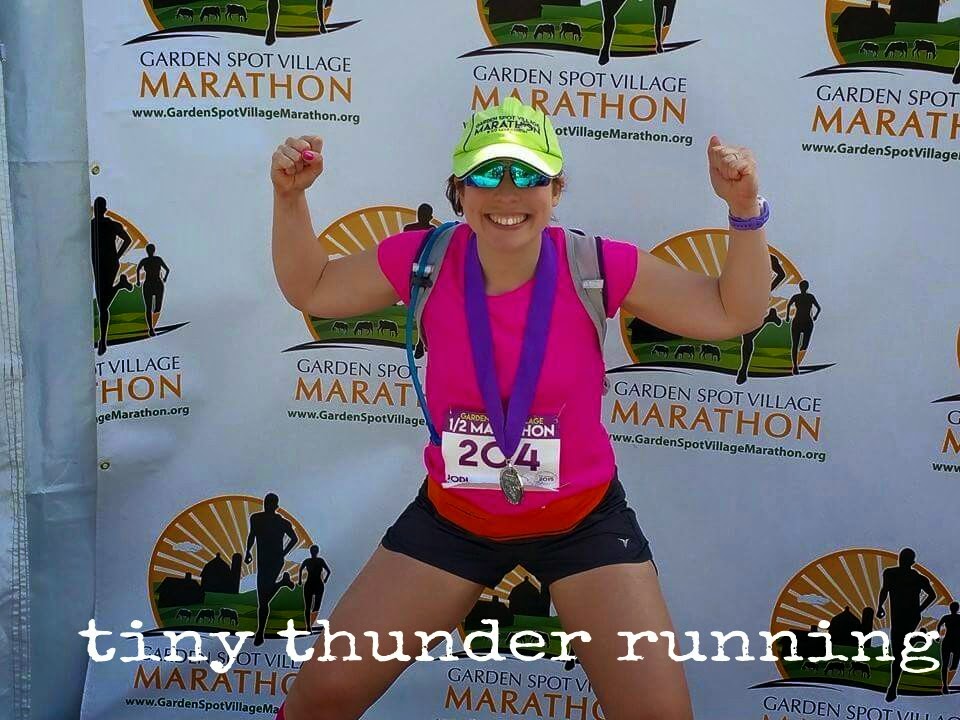 Me just being goofy!! I was so excited that we got these BRIGHT green hats as a finisher gift. We kept seeing people with them Friday night (after the kids run) and wanted them so bad!! 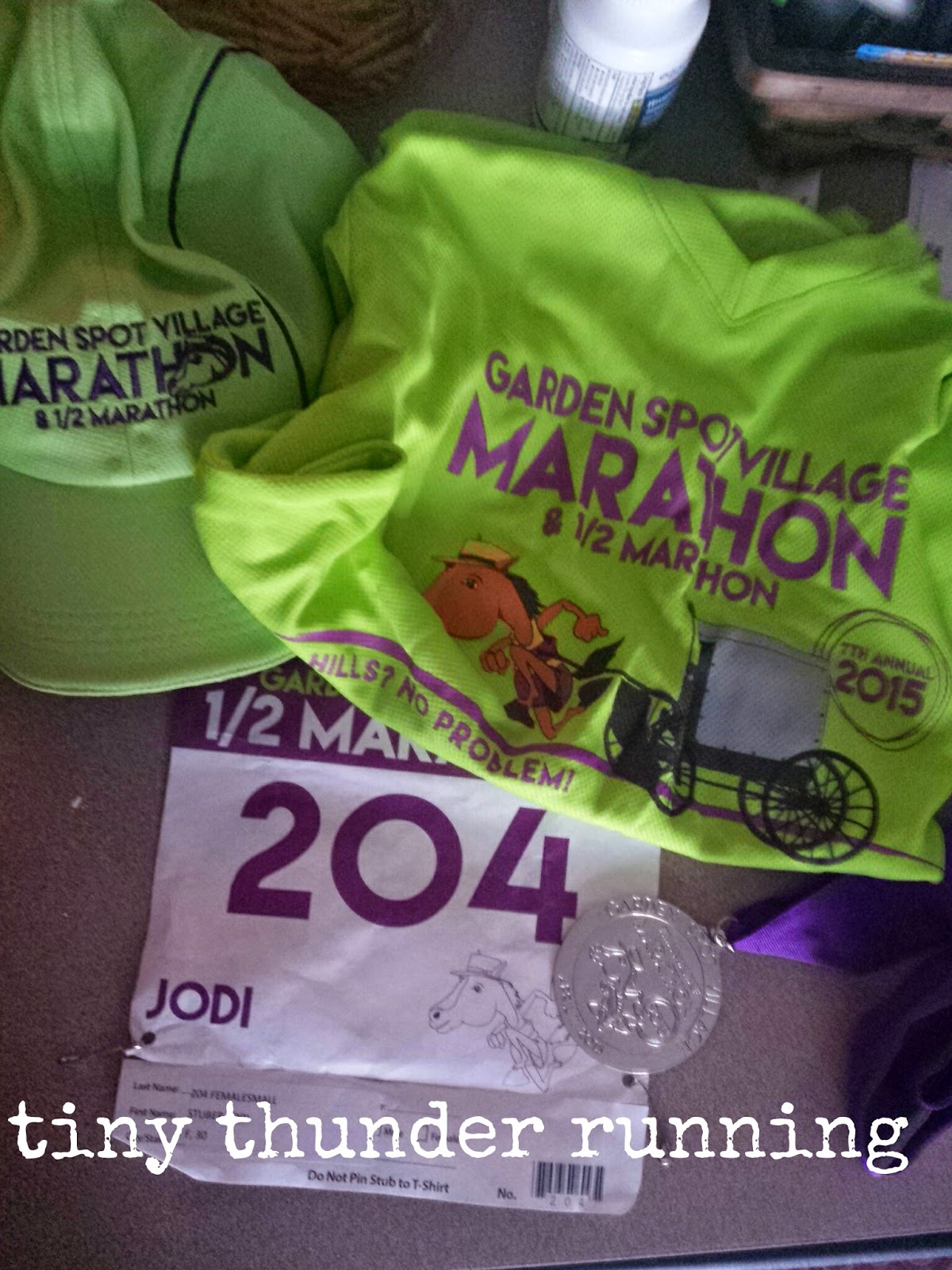 Not bad swag for a "small" race in Lancaster County. I love the "Hills? No problem" line on the shirt. This doesn't include the draw string backpack we got which was rather nice quality as well. Very well done to all the volunteers and the race director. Given the level of awesome that this race, I definitely could see myself doing it again in a few years. Also, this is the first race of the Road Apple Award series from Run Amish Country so one down and one to go!!

What was the hilly-est or most challenging race you have run??