Disclaimer #2, this was, admittedly, my first time participating in a race against racism. I attended last year at the very end to see a friend who had run and watch a performance. I typically limit the number of races that I do in Harrisburg primarily because if they start on City Island, they are pretty much always the same course. This is not to say it is no absolutely beautiful running along the river, but when it is a 5k and always the exact same your brain gets a little bored.

Anyway, enough about that. I had not done a Harrisburg City race in a while other than the 10 miler back in March. My employer was a sponsor for the race and as a way to get attendance, they were paying for the first 20 people who responded that they wanted to join. My department was very lucky in that 4 of us actually got a spot to run. We met before for some pictures. 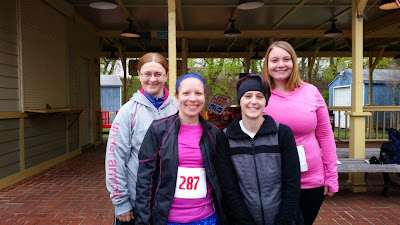 My department- I called us the MSSketers. We are in member services. 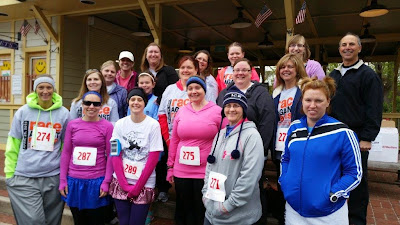 Most of the group walked but it was pretty cool to be part of this larger group. I didn't finish at my goal pace, but given that my first mile was a 7:50 mm, and I finished at 27.07 I called it a win. I haven't run a race like that in a pretty long time and it felt great. Oddly enough, I think I was more wiped out after that than I have been after some half marathons.

There is not really a whole lot to say about this race other than the fact that it really is a great community event and we had a gorgeous day to participate. They had a great warm-up dance and workout-ish routine prior to get everyone pumped up and ready to go as well which was nice because it was a little chilly.

Have you ever participated in your local race against racism?