Another good throw-back post (One of many more to come) about  another (somewhat) last minute trail half marathon I ran on June 13th, 2015.

The night before turned out to be not quite as exciting as we'd imagined and even more exciting at the same time. I had spent the week in West Virginia visiting with my sister's family as they adjusted to their newest addition, their 4th sweet boy. I left late that afternoon after her oldest got home from school and headed home to unpack and repack and leave all over again.

I had just arrived home and the friend who I was staying with for the night had messaged me that she was running late. No big deal. She let me know when she left and I did the same. I thought I knew where I was going for the most part and put the address she had given me into my GPS as back up. Needless to say, it took me completely the wrong direction. Because the phone reception is so bad there, I had to backtrack a bit to get signal. I called her on the cabin landline and started out again. For some reason, my GPS took me the super long way to her place and it started to storm and get foggy. I was SO glad when I made it! I ate some dinner and then we headed to see another friend camping out near the race site. We rolled up and it was pitch black, so we yelled out the window and our friend Linda emerged. We got to chat with her for a bit until it poured down rain.

We headed back to the cabin and got everything settled for an easy morning.  We got into our futon beds and fell asleep. At 3 in the morning or so, we were woken up by a weird noise. After getting in and out of bed a few times and quite a bit of "investigating" we found the culprit. A little white mouse was caught in a trap and trying to move. He would only move when the lights were off and w were quiet. We put him down into a plastic bag and put it outside to deal with the next day (in the daylight). We went back to bed in hopes to get a little more sleep before our half marathon!

Saturday morning we got up, had some breakfast, and headed to the race site. A few others were there before us, but the wait was short to get our bibs. 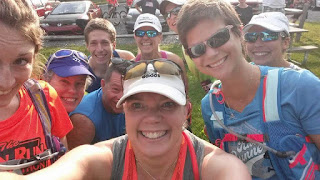 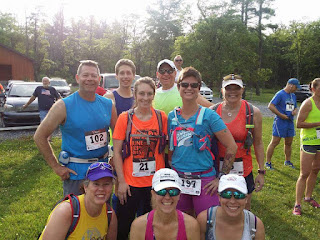 Then we got someone to actually take one for us 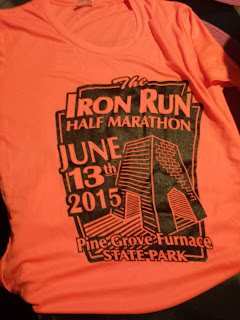 Bright orange shirts for all!

Now onto a little  a more about the run itself. It started out in a pretty cool place called Pine Grove Furnace state park. Named after this :

I have always thought this was so cool.

The start of the run is right by the furnace then up a hill, cross the street, go up another hill to get to the trails. The trails were absolutely beautiful. Quite a few streams running through the area and decent tree cover. We were very thankful for that since it was SO hot and humid that day.

Such a sight. Such a nice break from road.

One of the neat "bridges" over the water crossings

Overall, this run was not nearly as tough as the Squirelly Tail half I did in February, but it was much more hot/humid. I took more breaks to stop and catch my breath than anything. The climbs weren't terrible just took your breath away. I definitely want to do this race again to improve my time. I was stuck behind a few guys for a while who were walking a lot more than I wanted. If I had to do it again, I would have passed them MUCH sooner.

After the awards, a few of us stopped at the Pine Grove store (a stop on the Appalachian trail) to grab some lunch. We checked out the ice cream hall of fame book (AT hikers mostly who make it through the half gallon tub of ice cream) to see if we could find our friend "Six strings" entry (see here for details). Low and behold, we did!

Anyway, enough of my ramblings.Until next time!