Before I get into the nitty gritty of the week, I just need to reflect for a moment.

Today was a really rough day at work. Really rough day at work. It was one of those sit at your desk and cry, can't wait to get off the clock to have a glass of wine kind of days. The details as to why aren't really important, just the background. I started to think about how unhappy and complacent I am getting again and wondering what else life has in store for me.

I quickly looked back on my week of running and training and then realized that I have so much and so many people to be grateful to have in my life.

Seriously.. a running pal actually reminded me recently that a job is a job and while it pays the bills, puts food on the table, and a roof over my head, it is ok to be just EH about my job. It is not ideal I guess, but it is where I am right now. It's not all bad, just has been overwhelmingly stressful and too much lately. But when the clock strikes 3:30pm, I am free as a bird and can run or do whatever I like. I guess I don't have too much room to be sad about it at all.

That brings me to my week of marathon training (on time!)

Monday I took an active rest day and got my yoga on. I needed the stretch and relaxation. Sometimes a girl's just gotta. 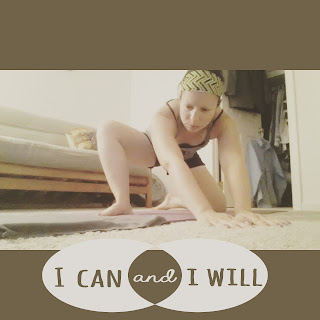 Tuesday I ran a solo 4 miles to and from my landlord's office to drop off rent. It needed done and that was that.

Wednesday I had 7 miles to do so I had to think a little harder about where I wanted to go. I left my house and went two towns over to run. It was pretty warm and the sun was still pretty bright because I decided to get out a little earlier. It was nice to leave earlier and be done a little earlier either way. This was supposed to be a paced run, so I set my Garmin to 9:45 mm. This worked out really well for the first half of the run. Up until the halfway point, a lot of this was down hill, so super easy and was actually ahead of pace for a large portion. Now of course, if the first half was mostly downhill, the second half was.. yep UP HILL. It wasn't easy and I definitely wished myself home a few times. But overall, struggles and all, I ran an average of 9:50 mm so I was okay with that.

Thursday  is Fleet Feet Mechanicsburg night which I love a little more each week.  This crew! New Balance was there and I got to try some shoes I would never typically try. They were so light and comfortable. I should have written down what I had on because they were super sweet. 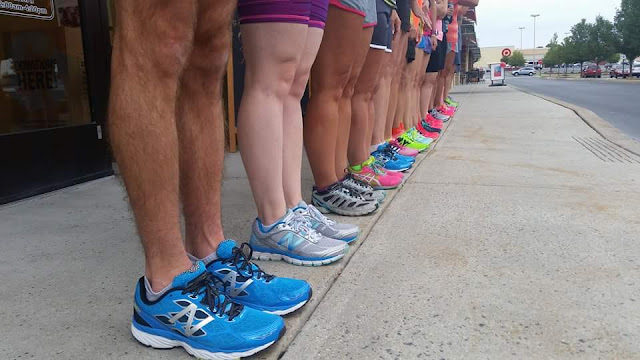 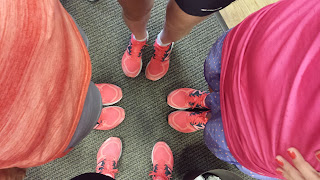 Look at those beauties.

Friday was wacky with a wacky work schedule of 4pm to 3am to help out, I did squeeze in a little yoga but did little else.

Saturday I slept until about 10 knowing that I was going to help my friend Don of Don Runs Far at his 50k later on in the afternoon. I agreed to volunteer a few months back and was really looking forward to the experience. I would be "sweeping" the last 9ish miles of the course markers with another volunteer. Since I was supposed to run 14 miles, I showed up early and hit the trail before my volunteer duties. I ran 4.6 and then returned to the start of the race. This is a race that is held for free and put on by Don as part of of local running club. This man has incredible heart and pride in what he does for the running community. He takes time out of his schedule to prep the course, clean it up, mark it and get it ready for runners. He and his wife put on a great picnic for runners to eat during and after the run. Such good people! 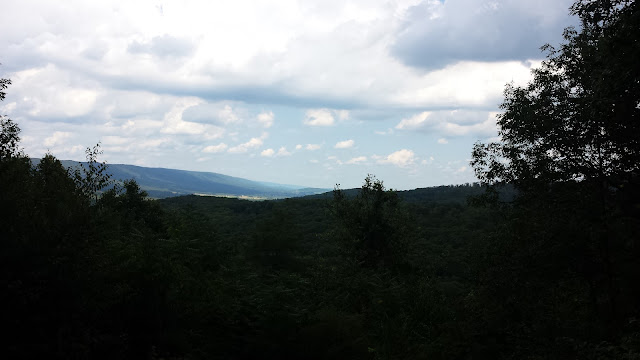 A beautiful overlook in the Tuscarora State Forest. 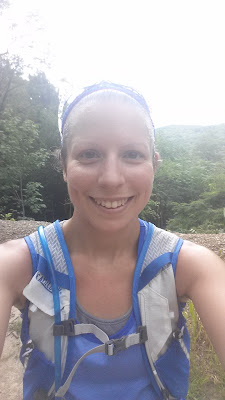 In case you can't tell, I am stupid happy up there!! 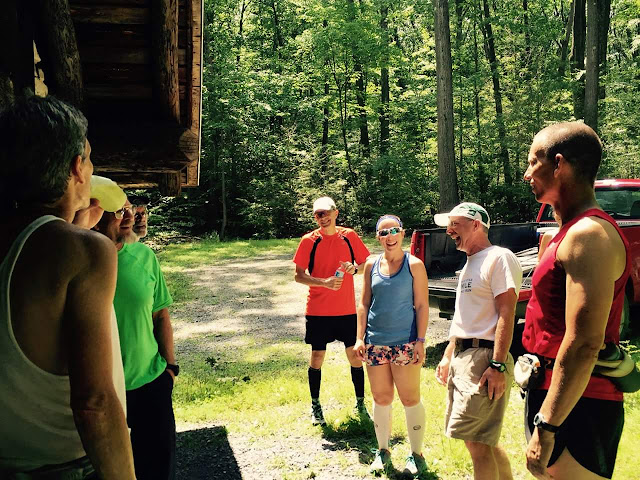 A nice candid someone took not too long after I got there. Don is the one in the white laughing and enjoying life. Some awesome ultra runners in this picture.

Being part of this 50k experience, completing 14.5 miles of my own, was pretty awesome. Witnessing the whole package really solidified my next crazy goal of completing a 50k next year. I really could have hung out and listened to the stories for hours. But alas, real life called and I needed to get home

Sunday I begrudgingly got up and met my friend at Progress Fitness to spin. I was really glad I went. It was a great workout, although we were not really impressed by the instructor this time. When I went two weeks ago, the (incredible) owner taught and I had a total blast. This time, not so much. Most of what she said was in a pretty relaxed tone and sounded like it was straight from a motivational poster or book. EVERYTHING. This is the complete opposite of inspiring. It actually made me want the class to be over faster. She also breathed heavy into the mic which previously had not happened with the other instructor. Needless to say, I think I will avoid that instructor in the future. I think she means well, but its totally not my style.

Overall, great week of fitness, friends and miles. I can't believe I am onto week 8!  Marathon training is FLYING by.

What motivates you? Have you ever been to a fitness class that was the opposite of inspiring? How do you cross-train?