Although it has been (what feels like) forever since game day, I feel like I am still trying to process all of it. This was my second marathon, but my first HUGE marathon. There were around 30,000 people running 26.2 miles with me and it was just such an experience. Unlike my last marathon, we traveled a little over two hours from home and stayed a few days in Washington DC so that I could participate in Marine Corps Marathon. 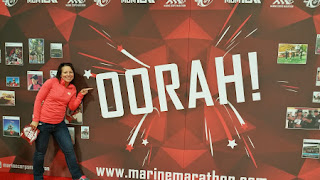 Starting a few days before, I had to check and recheck to make sure I had everything that I needed for the marathon on Sunday. I have run half marathons away from home, but to me this is so much less work than prepping marathon necessities.  Basically, I had to make sure I had my camelbak (ALL PIECES!), NUUN, huma gels for fueling, running clothes and socks. Oh and don't forget the running shoes. 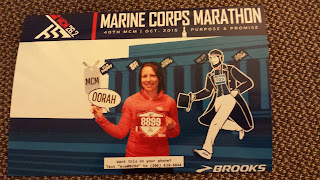 We left home on Friday and I couldn't get to DC or to the EXPO fast enough. (Did I mention how excited I was??) We left home around 10am and got parked in DC around 12:30pm. Although I was hungry, I just HAD to go to the expo before I thought about anything else. 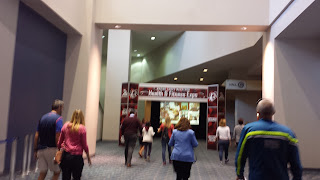 Pretty sure I was literally squealing and getting weird looks from the hubs as we approached this area. 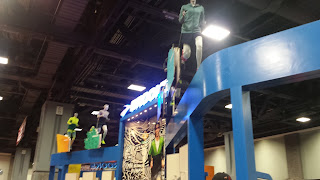 The view for a little from the Brooks store line. Which took FOREVER. But I am grateful that I was there and got my choice of jacket and size. We had some good line mates to chat with too. 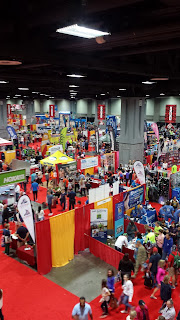 Overhead view. I was amazed and excited about all the cool running things!! 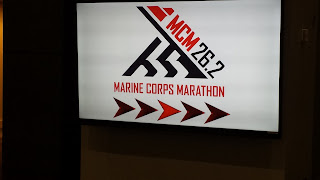 I will spare you all the stuff we did before and after the marathon.. I'll save that for another post. 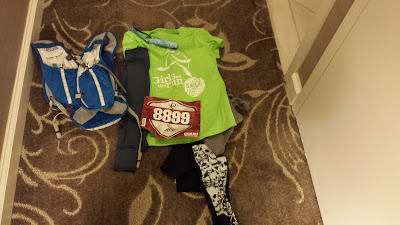 Sunday I woke up at 4am with amazing anxiety ease. Although everything was laid out and ready to go, I still needed to.. well.. make sure I had time to go to the bathroom and feel ready for running 26.2. I had plans to meet my awesome running buddy, Marni, at her hotel where her husband would drive us closer to the start. I took my very first We got parked and linked up with another group that was walking to the shuttle to get directly to the start and as luck would have it, were found by a hotel shuttle who saved us quite a bit of walking! We were so thankful. The hotel shuttle dropped us off and we hopped in line for the buses. This didn't take long at all!

When we arrived to the "start," it really wasn't. We had to wait for what seemed like forever in this line to nowhere. I say that, but as we got closer, we could tell it was security check.   I found out later that many people took so long to get through, that they started the race 40 minutes late.

Brad, myself and Marni

I was grateful to be able to at least have a few people in a nice little before pic.

At the start of the race, they had these awesome skydivers. 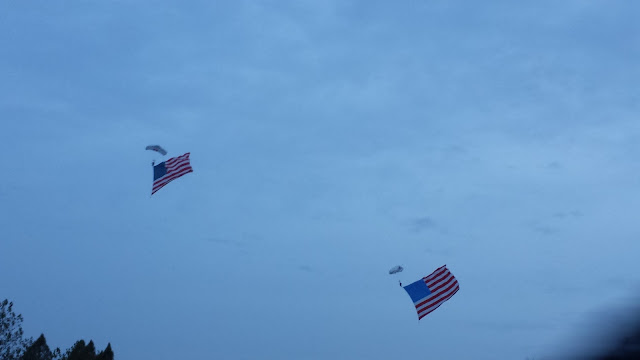 They announced that they were skydiving with the biggest flag ever. It was an incredible sight to see and gather inspiration before we set on our 26.2 journey. 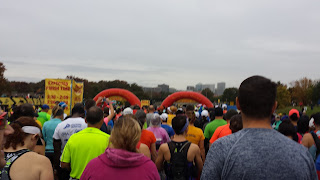 We eventually made it to the start.. AKA those red arches.

I was very nervous about starting the race alone for some reason so I stuck with Brad for the first 16 or so miles. After I got started, I realized I was silly for thinking I couldn't do it without someone else there. You just put one foot in front of the other.. and honestly, I was never really alone.

I remember somewhere around mile 6 or so thinking "Man, this is really where I am supposed to be right now." It was raining hard, I was in a group of 30,000 people, and we were all there for the same reason. I knew I was supposed to be nowhere but there. This was really weird because I do not recall ever feeling that way about any other race. I really wish it hadn't been pouring, because I would have loved to capture some of the beautiful trees that lined the road as we ran. I was just blown away. 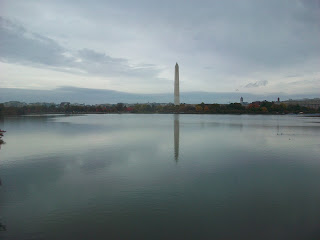 How could I NOT stop and take a pic (or 3) of this view. I mean, it was completely breathtaking. I still need to lighten this pic a bit and would love to frame it.  Granted, stopping here would later cost me my PR, but whatevs. Totally worth it. Shortly after this, I got to see my hubs for the first time too!!Needless to say, I cried. 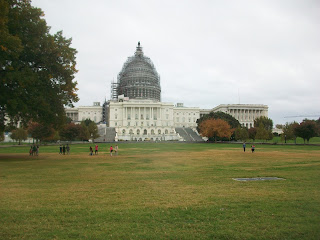 Just keep on running.. It was really fun to run through the National Mall. I am pretty sure I was still crying through here a little bit. 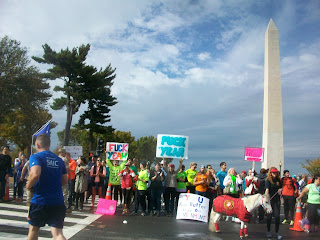 We were really in the tail end of the race here.. or so I think. It is really hard to remember exactly where each point was. It is all a blur at the end of the day I guess. What I do know is that I really REALLY loved this race. I was amazed by all the crowds and support. I was amazed about all the thoughts and feelings I went through as I ran those 26.2 (plus) miles. Near the end, it was encouraging to have the soliders literally yelling you- mostly things like.. You said you wanted to run a marathon-- so RUN!! I really needed that at a few points, near the end I heard it, but my back and feet hurt so bad, I needed the quick breaks. It was such a different experience than my first marathon and while my first will always be treasured, I have decided there will never be anything like MCM. I am already ready to go back.

Even though the struggle was really REAL a few times, I finished strong and felt really happy to have accomplished another 26.2 miles. Hubs caught this shot of me right near the finish. 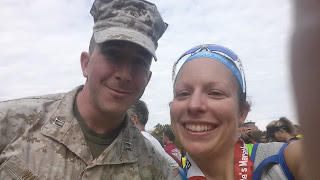 The man who gave me my medal :) Thank you for your service. I really had trouble holding my phone to get this picture... just a side note. 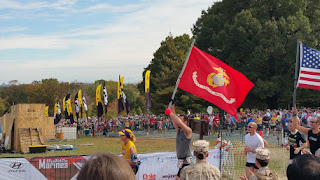 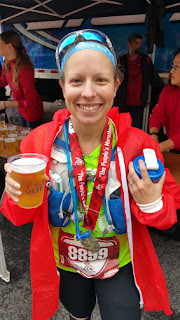 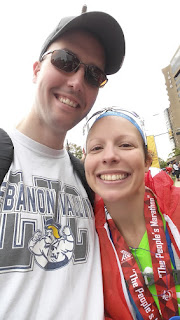 Overall, I had a really great run. I enjoyed myself and would do it again. Very few things bothered me and here they are: I got irritated with was the amount of people who almost ripped my arm off getting past me outside of the running lane- I get that people have goals, but maybe be nicer? I was also mad that my watch DIED at 24.75. I was typically .3 miles off each mile marker or more, so this last little bit minus a watch drove me nuts. I was in the dark as far as pace and overall time and I didnt like this at all. Needless to say, a new Garmin is on my Christmas list. The only other thing that was irritating was the people that would literally stop DEAD in their tracks at the water stops or to see friends/family on the route. HELLO, there are people right behind you and are going to get run over. Just a really bad idea.

Like I said, great race, lots of fun, lots of spectators, amazing Marines. I would do it again in a heartbeat.

Congrats to everyone else who finished this race. I hope you all enjoyed it as much as I did-- OORAH!! 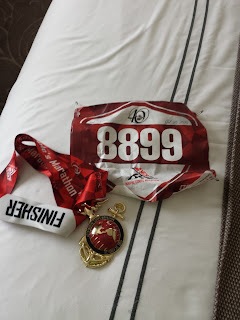 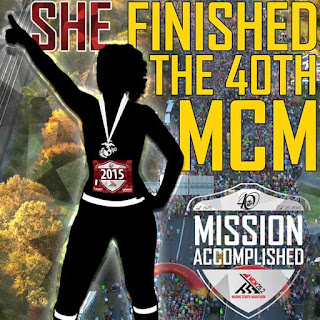