Last year, around this same time, I did a race called Squirelly Tail Twail Wun and wrote about it. I really did have a good deal of fun and decided to do it again.

I even talked two unsuspecting friends from my running group into doing it with me. Well not really with, because we are all kind of at different places- especially when it comes to trails. I probably have run the most longer distance trails, one has run quite a few but shorter distances, and one none.. and definitely NOT in any of the conditions that we would encounter 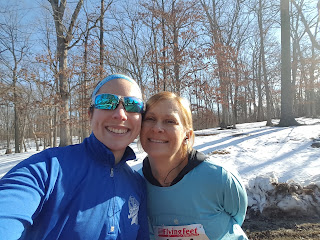 It was pretty mild for February and we were initially warned to wear plastic bags in our shoes to keep our feet from freezing due to all the standing water from snow melting. It did get a bit colder the day or two prior so some stuff re-froze but oh boy.

In the first mile, my one friend said she felt like she was drunk running. There was so much instability in that first mile just because you had to navigate in 100% snow. It is not easy, my friends. It is not easy.

As much as I really enjoyed the challenge last year, it was a totally different ball game this year. There were huge stretches where you would run a little, maneuver around monster mud puddles, run a little, maneuver more. I would say a good 75% of the course was a hot mess. It took me forever to navigate so many areas. If it wasn't mud, it was ice! Even the ice you couldn't trust because it could break and your foot would sink into COLD, ICE COLD water.

I'm not even mad though. 13.1 miles of pure effort. I stuck with one girl for a few miles and then somehow in the last 2, I completely lost her. Well, as fast as you can "take off" after all of the slipping, sliding, and dodging I had been doing.

I wish I would have stopped to take some pictures of the puddles and snow, but I felt like it was already taking me so long that I didn't want to extend my time that much more. 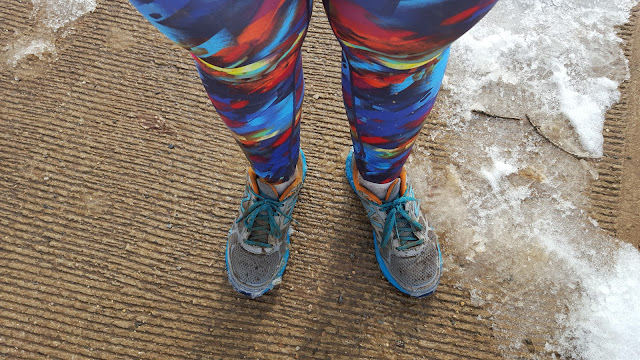 I wish I could have gotten a pic earlier- at one point these shoes were completely BROWN. 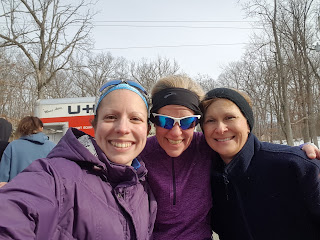 Thankfully, my friends were still talking to me after this race! 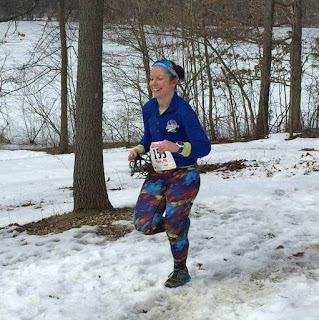 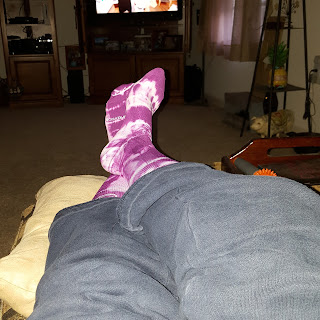 I was so happy to get home, shower, throw on some Crazy Compression and
start the recovery process.

The reality is this- February trail runs in PA are so unpredictable, but to me it is worth the gamble. It might have taken me around 3 hours 20 minutes to complete this race, but it was with a fun crowd and I wouldn't take back the experience for a single thing. Will I do it next year? Probably!!

Do you go out on a limb and try races that the conditions are questionable? How did that work out for you?