Island to Island Half Marathon

If you follow me on instagram, you have seen the blow by blow of my workouts over the past few months and how excited I was for this race hopeful for a super sweet PR and sub 2 hour time. Unfortunately, neither of those things happened for me.

Let start from the beginning. 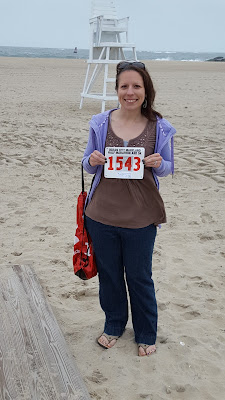 Friday, we arrived in OCMD around 7pm and I got my packet. I promptly had to get my feet in the sand and get a nice picture too. It was chilly and windy for sure, but I didn't care.

Next stop was Grotto's Pizza, but I was so hungry/hangry that I failed to take a picture.

From there, we checked in to Days Inn oceanfront which if I ever visit again, it would be too soon. The floors were dirty, there was mold in our bathroom, among other things. There was this huge group that arrived around 10 pm Friday night which kept us up all night. We decided quickly that we would NOT be staying there another night. The group was possibly college age and were completely disrespectful to anyone else staying there. When we spoke with hotel staff the next morning, they basically said that group was scattered all over the inn and they could not promise another room would be any quieter. We promptly checked out and left.

But back to the race!! 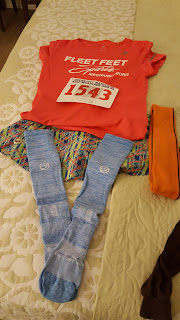 Saturday morning I was up and at 'em. Unfortunately, I forgot my tried and true pre-race food of toast and peanut butter so I had picked up a nature's valley PB granola bar for fuel. Even more unfortunately, I think it did nothing for me. We got to the shuttle bus area by about 5:50 am and I got in line for a bus. I was loaded and ready to go around 6. Because there were police escorts, we waited and waited and waited on the bus til we were able to go. In fact, we didn't leave until 6:15 and there was still another whole set of buses loading after that. 6:15 was supposed to be the last call for buses, so I knew that probably wasn't good.

We got to the start location at Assateague State park with about 10-15 minutes to spare and I knew I needed to use the bathrooms before lining up. Much to my dismay, I was still in line when they started the race- 2 minutes early might I add.

I did my business and then made my way to the start line. I fixed my shoes and was off running. I immediately felt like nervous because I now had to get around the slower paced runners in attempt to start out on target for my goal pace. The hardest part was going over the bridge from Assateague island. The bridge was packed with people and I literally jumped up on this wide concrete curb to get past people.

The first 3 miles I felt great and free as a bird. By the time I hit 4, I could feel my energy plummet. I quickly took an energy gel and some water and traveled on. Around mile 6, we looped through this cool neighborhood and I was feeling better about things. I slowed at the water stop in there and filled my water bottle. When I went to speed up again, I quickly realized I had a crippling side stitch. I tried to breathe through it and continued to fight with it for about a mile. When my watch flashed a 10:52 mile average for mile 7, I knew my goal of getting sub 2 hours was gone. I decided to get my crap together, focus on breathing and get back to a better paced run.

I started to enjoy the race again, refueled and was ready to finish out the race.

We entered the boardwalk and a little ways down, I was ecstatic to see my husband (who snapped this awesome picture). I was so ready to be done and seeing him helped me keep going for a bit. I did take a few walk breaks in the last mile because my legs ached so bad- probably the worst ever for a half. I limited them to 15-20 seconds and then picked it right back up. 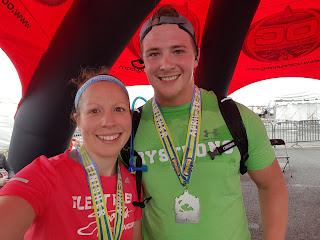 I did meet a pretty cool guy along the way. We kind of went back and forth passing each other for a while before we started chatting about 2 miles or so from the finish. He was running in honor of his girlfriend who passed away about 5 months ago. She was supposed to run this race as her first half. After her passing, he started to train to run it! How incredible right? I really enjoyed chatting with him and his enthusiasm and determination is contagious. This is what completing races is all about. Community. Sharing experiences and enjoying the journey.

I made my way through the tent where there was fruit and maybe some other snacks. I wasn't really sure and didn't take the time to look. I started texting the hubs to let him know where I was and I looked up as I got to the edge of the tent and there he was!! We walked to the car so I could get on warm dry shirts and  jacket because it was freaking COLD and windy over there.

We went to the tent with the pizza and beer because.. priorities (and it was warm in there!!). Then came back out for a post-race photo before we walked back towards the finish and ultimately to the car. 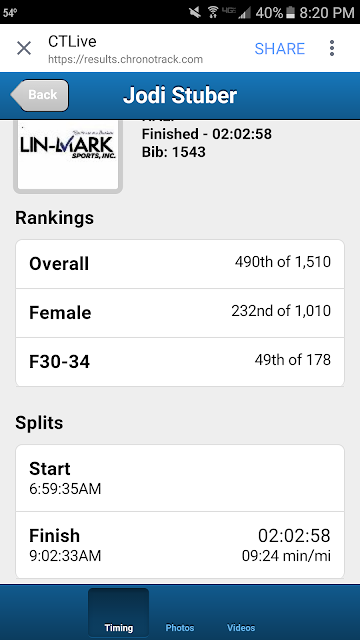 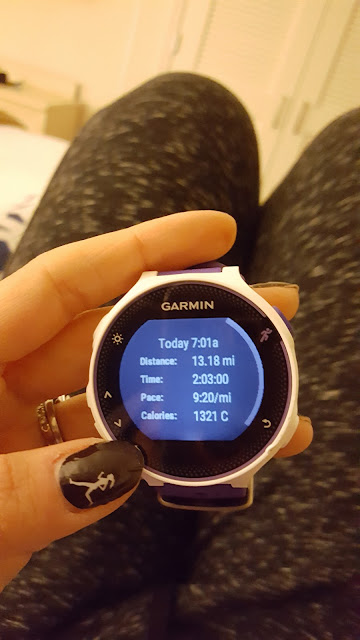 Overall, I would say this was a well-done race. I was upset that I missed the official start because of the weird bus situation and technical early start. The aid stations were great. although they were off a bit from the mileage points they told us.  They were all well-stocked and friendly which is always a plus. The pizza and beer afterwards were good. Would I do it again? Probably not unless more local runners were going. The crowd support was EH- but I think that was just a product of the 1 way race. It was probably very difficult for people to get onto the course unless they lived out there. There was a couple from home who ran the race too, I did get so see them in the neighborhood loop so that was cool. 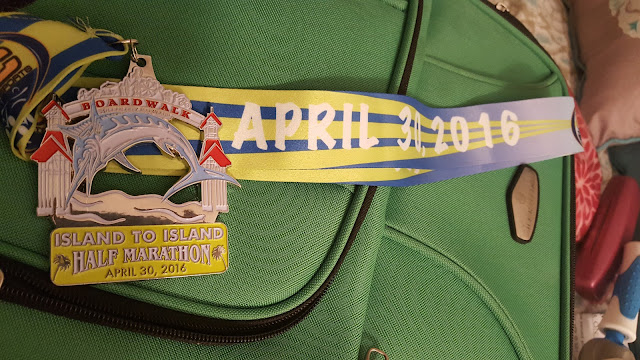 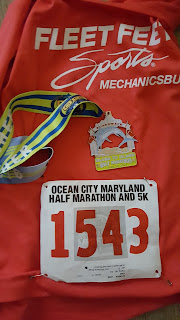 I think next time, I will look for a race that runs more along the water. I do have to say though. it was a good excuse to take a trip to the beach even if it didn't break 60 degrees while we were there!

Anyone else have an "eh" race? Would it change for you if you had other friends running it with you?