WARNING:  This isn’t going to be your typical race recap- it may also be a little lengthy. Bare with me.

A little over a week before Hershey Half Marathon was set to take place, my phone vibrated and when I checked the message it was one from a friend asking if I’d like dibs on a free bib to run. HECK YEA!!! I hadn’t planned on running any more long distance races this year since I had just completed my first 50k merely a week before. The being said, as a stubborn runner who doesn’t like to miss out on an awesome opportunity, I could not turn this down.  I responded very quickly that I would love to.

I was not sure how my performance would be at all but I knew I could not miss out.  I have mentioned to a couple runner friends how much I wanted to go back and do this race, but figured I would have to wait to see if it would be in the cards for 2017. Last year I decided against running it because I had a marathon the following week.  This year, the 50k two weeks prior and I had no idea how my body would feel recovery wise.

Why did I want to do this race again so badly? Hershey holds a special place in my heart and always will. This is where I ran my first ever half marathon (you can read about it here). It is also, coincidentally, my PR half marathon.

Yesterday all I could think of was how different so many things were for me since I ran this same race just 3 years ago.

First and foremost, I arrived by myself at 6:15 am this year instead of probably a little later with my husband and training friend in 2013. I did not stay alone for long though!! I knew a few groups were meeting up at different times prior and quickly checked dear old Facebook to see if anyone else was there yet. Low and behold, Brad was parked close by so I hopped out of my car and walked to meet him. We chatted for a while and caught up since it has been a good few months since doing so. We talked about race calendars and our plans for the race.

At 6:40 am, we traveled up to another meeting spot for our local running crew, RIVER RUNNERS for our group picture.  We chatted for a bit, used the bathrooms, then headed back to the cars to finish getting ready.

Part of getting ready was heading back to my friend's car to partake in some adult beverages. This group was fun because I didn’t really know most of the people very well and two of the ladies were running their first half. It was funny to hear how nervous  and squirmy they were, mostly because I remembered the feelings all too well!! 3 years ago I would have never dreamed of drinking anything other than water before a race but there’s apparently a first for everything!!

(thanks for the photo, Brad!)

After partaking, we all broke up and headed our separate ways to the start line. This was another awesome difference from 3 years ago. I have a running family now that I could have never dreamt of 3 years ago. While I trained with and ran about half of the race with a friend 3 years ago, it is so different when you know a ton of the people running.  I started out with 2 other friends who were  in the same boat as I was- recovering from races and unsure what the race might hold for our bodies.

(Names have been changed to protect the identity of the runners. Just kdding- we were all running on swapped bibs)

I also ran into an friend from an old job and got to catch up with her before the race started- SO SO GOOD to see her. 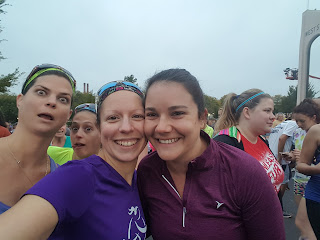 (Ignore the weirdos in the background..ahemm)

We got started and just chatted away. The miles flew by. SERIOUSLY FLEW. About 3-4 miles in, we heard a familiar voice (and laugh) of another good friend coming behind us. We continued to chit chat all the way through Hershey. We checked on each other to see how we were feeling, made sure we all kind of stuck together, and had a good old time.  We all conquered each and every hill together and stuck together mostly until somewhere close to mile 12.  I am still pretty impressed that we took very few very quick walk breaks and kept on pressing on.

(thanks for the photo, Holly!! A fellow solemate- we laughed because later in the race someone cheered for us by saying "GO PURPLE PEOPLE EATERS!! Much needed humor. )

One thing that was just as amazing the first time around was the support from the awesome kids at Milton Hershey School. For anyone reading that doesn't know, this school is generally for underprivileged and impoverished kids from all over the country. It is an amazing opportunity for these kids and they live and go to school on the campus in Hershey, PA. the race takes you through quite a few areas of the campus and kids of all ages are out there cheering you on with signs and high fives galore. I dare you to run through and not tear up a little. I can't. They tell the runners how inspiring we are and we tell them thanks for being there and how much the mean to us. FEEL THE LOVE?!

(from MHS facebook page- I wasn't trying to take a picture at this point!) 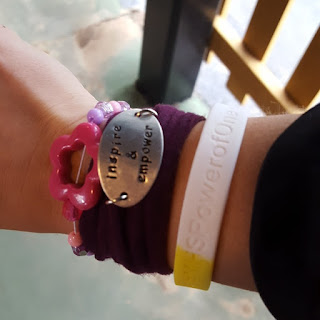 (arm candy including a bracelet handed out by the MHS kids)

Crossing the finish line felt just as victorious this time around. Although it wasn't my first half marathon any longer, this finish line represented how far I have come in the last 3 years. Countless 5ks, 10ks, 10-milers, half marathons, two full marathons and one 50k later I know I can do so much more than the runner I as 3 years ago. 3 years ago I though maybe, some day I would do a full marathon. I wasn't entirely sure when or how I would make it happen. 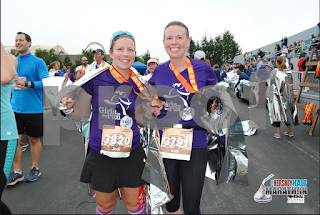 (official, not so official race photo with Kelly!)

I have changed as a person and as a runner since 2013 in SO MANY WAYS. So many good ways. Ways I am proud of. Running has truly evolved my life and given me this incredibly wonderful running group that I consider family. It has really helped me push my limits, give me confidence and connected me to so many amazing people in the process. 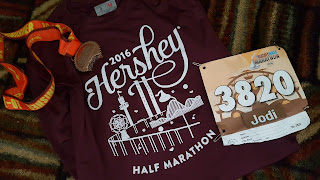 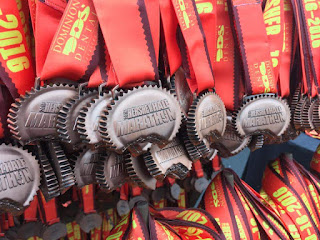 We celebrated afterwards at Troeg's brewery since it was a quick drive from where we were.. of course we needed another group photo. Sadly, there were a few other's there beforehand that we missed.

I was so nervous back in 2013 as I lined up at the start line but little did i know that it was just the beginning of an amazing adventure and how much running would continue to change my life race after race and year after year.  It was so fun to reminisce at yesterday's race as I took in all the miles for the second time. I hope I will be back many more times in the future!

Have you ever run a race more than once and stopped to think.. really think about how you are different than the first time you ran it?? I am not just talking about paces, but rather how YOU are different as a person?