{Not your average} Medal Monday

I can't let this month slip by without sharing an amazing part of this year's running journey with you.

This is not about a personal achievement. Not at all.

Although personal tooting of our own horns is often the subject of our blog and/or social media posts, that is not the purpose of this post.

Instead, it is a celebration of friendship, same pace camaraderie, and the massive amount of miles it takes to cross the finish line of a marathon. Especially a first marathon. 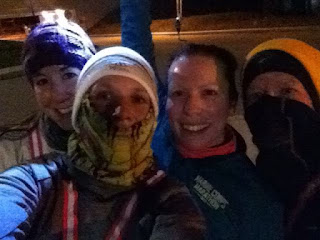 This is a picture of us all bundled up at that first workout. Little did we know...

Long story short we trained together all spring and, in the process gained a group nickname. We always needed to know very specific details regarding paces and exactly what our workouts each week should entail. We asked lots of questions and pushed ourselves at every workout. What was the nickname, you ask? OCD Diamond. We were referred to as the OCD Diamond quite a few times and we eventually gave in and began referring to ourselves as just that. 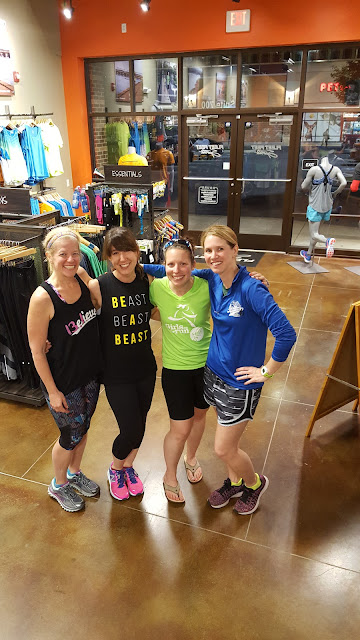 Next came the summer/fall season and we all signed up again to train together. Katie and I had eyes set on marathon and ultramarathon distance (respectively) while Michele and Michelle were focusing on half marathon goals. Unfortunately Michele became injured early-ish in the season and was out for PT a large part of the summer and fall. We missed her dearly and exchanged TONS of facebook chat group messages back and forth checking in on each other to see how she was progressing.  I had issues of my own and also missed some running. Katie had an Achilles issue and was also out and on reduced running restrictions for over a month. Michelle dealt with some unexplained calf cramping issues at a few races.The injuries and issues sucked, but knowing that we were all always there for each other was unbeatable.

A month before Katie's goal race, Harrisburg Marathon, the other three of us were inquiring over what the plan would be for Katie and whether she was still planning to attempt the race. Although she had missed quite a few long training runs and more miles than she would have liked, she continued to be cautiously optimistic. She persevered and continued increasing her mileage gradually to assess whether the race was realistic.

Katie sent a message the group after each run with a status report. Every time we had a verbal positivity party for her as we neared closer and closer to THE day. With each added mile and each positive report the excitement for her grew.

We made group shirts and I even got group bracelets made for us by Momentum Jewelry which I gave them and of course we had to get a picture immediately!! We adapted our shirts to say "The Diamonds" so as not to offend anyone who didn't know the story behind the name. 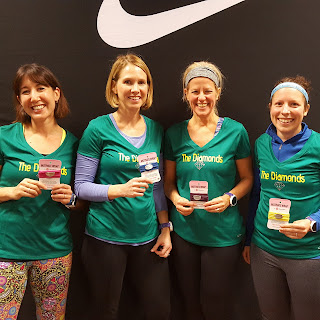 You might be wondering... why did we need group shirts if we weren't all running the marathon? Well, back in the summer when Katie first set her eyes on the marathon, we all decided we would also form a relay team so that Katie would not be alone in those miles when things got really tough. At that time we were just thinking it would be a nice thing to do given that it was her first and that having company is so helpful, especially in those final miles when you want so badly to throw in the towel. The night  took the photo above we had an an honest conversation with Katie. We all told her that we were not leaving her or letting her quit (barring really awful injury or reason she couldn't continue) because we were not there for us, but for her. There may have been a small tear fest at that moment, but that was the 100% truth.

I was volunteering earlier in the day to help set up all the water stations so Michele and Michelle ran the 2nd and 3rd legs of the relay, while I ran the 4th. I waited there for Michelle to return and then would take my turn running with Katie. When Michelle arrived, we switched the tracking anklet and off I went. She had to make a pit stop and then (QUICKLY!!) caught back up to us. Katie was hanging in there at mile 21. Recognized soreness but no injury or pain that was going to stop her from making it to the finish line.  The three of us put one foot in front of the other, chatting like usual, until we reached mile 25 where we picked up our 4th member, Michele!! 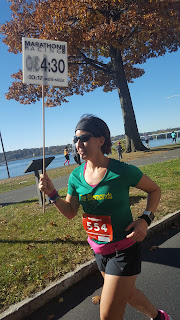 She even had the honor to carry the pacing stick the last .2 of the race since the Diamonds had become the pace group. Doesn't that sign look good on her??

Getting to cross that finish line as a group and being there to support Katie as she bravely finished her first marathon was by far one of the best moments of the year!! She fought and worked so hard to make this finish happen despite her body trying to punk her and make her give up. 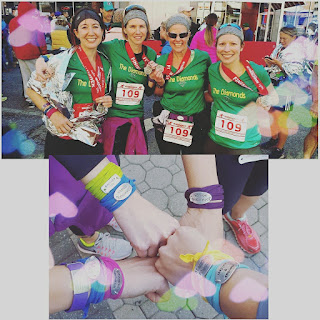 So today's medal Monday isn't about my medal from this race. It is about Katie's and all that it stands for. Strength, perseverance, and true grit. 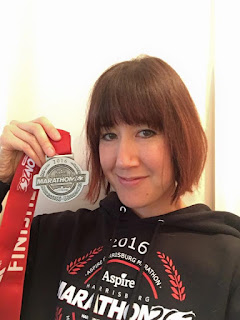 I am so incredibly proud of you and your accomplishment. Thanks for letting us all be part of your special day and share those miles with you. I hope you never lose the feeling of how it felt to cross the finish line at your first marathon.

I was also hoping to have a super special photo to end this post with, but I am still on the hunt. After we all crossed the finish line, we instantly went into group hug (and crying) party mode. Someone from the media staff covering could be heard taking many snapshots of us together. Unfortunately, I am still trying to track down that photo. I do think I have a pretty good lead, but bummed I didn't have it in time to share this post.

That being said, I could say so much more about our little group and our crazy weird bond that we share, but mostly that I am so honored to know each of them and am so proud to call them my friends. Each one of these ladies inspires, uplifts, and encourages me just when I need it the most.

Is there someone (or more than one someone) in your running circle that you have a similar connection with?? I would love to hear your stories in the comments below!!