The weekend before Christmas I did something I have never done before, but definitely hope to do again. 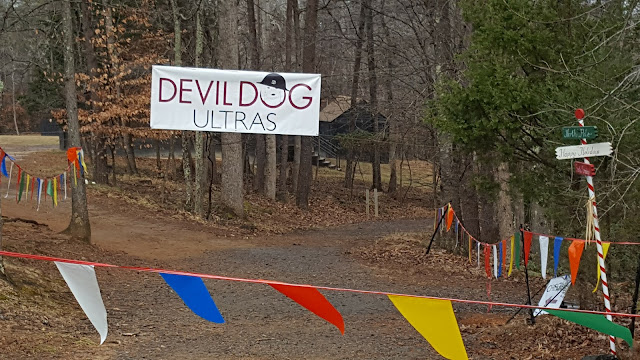 I had been asked by a friend to crew and pace her for Devil Dog Ultras as she would conquer the 100k race. There was also a 100 mile option that another member of our group (Fred) would set out to destroy. Initially, I wasn't sure I could or should commit an entire weekend to something that wasn't on my initial schedule for 2016. After discussing and thinking more about it, I knew I had to! Bekah is a good friend and I knew I had to be there with and for her. 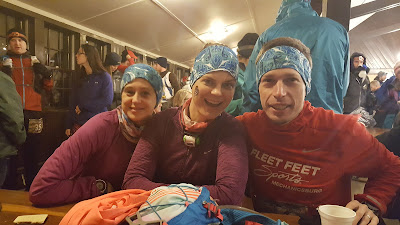 Emily, Bekah and Fred all ready (and maybe a little nervous) for the hours ahead of them.

The early morning crew-ers. Me, Chris and Maegan. 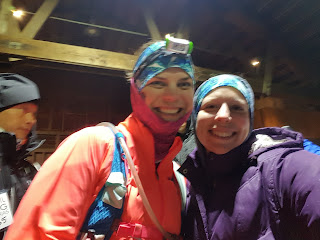 Here we are right before Bekah was getting ready to leave on her journey. Ice and all. So badass. 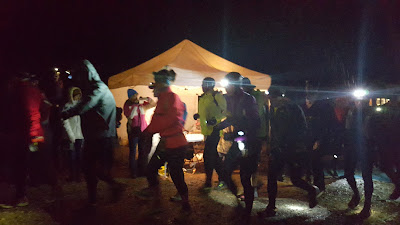 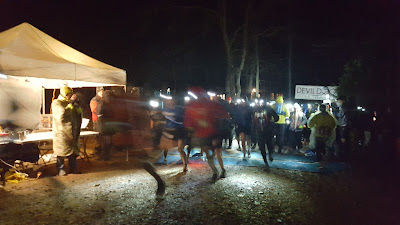 After we saw them all off on their running journeys, the 3 crew members headed back to the hotel for some breakfast and to pack up the rooms.  This was an interesting trip because of the worsening ice/rain situation. When we parked at the hotel we actually had to "ice skate" to the front door because it was so slippery. I would love to know how long it actually took us to travel the short distance from the car to the door. I would also love to see a video of it, because it was definitely an interesting time.

We had requests for beer, so after breakfast we headed to Wegman's to pick up a six pack to be enjoyed later in the day. By the time we left Wegman's, it seemed like the temps were rising a little and maybe things were thawing out a little, too.

We returned to the race site and waited for our runners to return from their first loops. 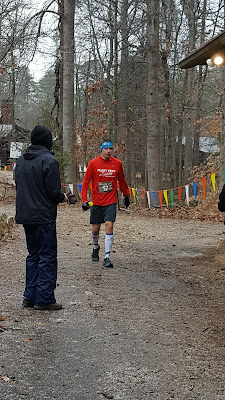 We were SO excited when Fred returned from his first loop. We were getting a little worried because he was expected sooner, but because of the ice and cold he was delayed. He looked a little tired and even a little defeated already but we cheered him on, got him dry clothes, shoes, and some food. We chatted a little and then sent him back out for loop 2. 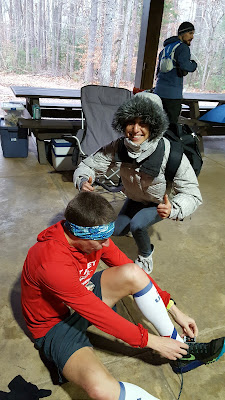 Maegan with Fred as he put on dry shoes- Yes she (and we!) were VERY COLD waiting for everyone.

About an hour or so later, Emily came back from her first loop and shortly after that so did Bekah. 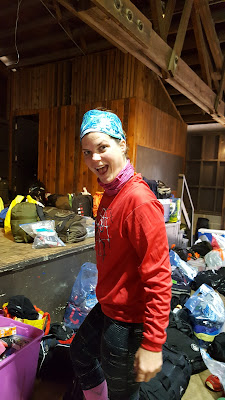 Bekah was tired, but in good spirits and ready for some dry clothes as well. We got her everything she needed and I told her I couldn't wait to see her next time so we could go out and run together!!  Everyone knew the second loop would be better than the first since it was warming up a bit and gradually everything would thaw out. 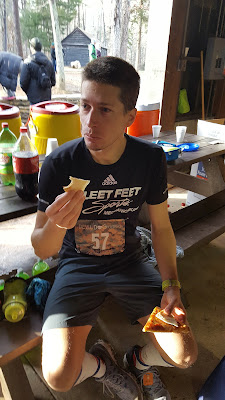 Fred was pretty hungry after his second loop!! Quesadillas, soup and pizza were on the menu.

When Emily arrived at the aid station the second time, she had some blisters that Jade helped her take care of and got some food and switched out her clothes again. I think we started battery changes for headlights as well, knowing the third loop would be completely dark. Emily looked very tired and seemed pretty stiff heading back out for the third loop, but seemed determined.

Bekah came back in from loop 2, and I think I cried a little for her. I knew she was concerned about not making it to this point due to a miss last fall at a 50 miler race. I had told her I knew she could and here she was! 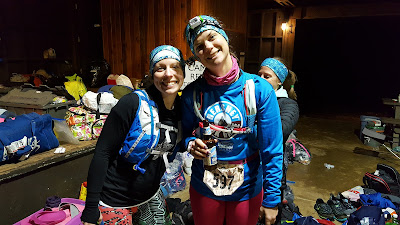 One last shot before we headed out into the dark together, for a good long run/hike. I waited ALL day for this. No really, I did. I had spent the day with the other crew members, waiting, eating, waiting, pondering napping, chatting, eating some more and waiting. I was so excited that it was finally my turn to be out on the trails with Bekah. 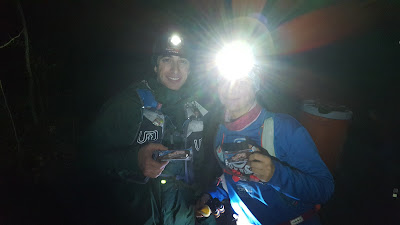 I think this was one of the first aid stations we hit and they had devil dog treats, so funny. I had to snap a quick picture.  As you can see, we had a guest with us too!! Brian joined us when his girlfriend Adriane had to drop out due to some bad pain and just couldn't continue.

The funny thing?? I knew Brian from YEARS ago as he went to college with a long time friend of mine. It continues to amaze me how the running community works and how you re-meet people from different times in your life. Needless to say, it was fun to experience part of his ultra-running journey with him that day as well.

So long story short is that the next hours were long. Some of the miles felt VERY long and everyone was tired, but I wouldn't trade a moment of it for the world. You see, when you do something that is not for your benefit, how you feel doesn't really matter. I mean, I guess in some way it does, but at that moment, for me, it did not. My legs and feet were tired from all the time spent out there, but I didn't dare say anything. I knew that whatever I was feeling, Brian and Bekah were feeling 3x as much. They endured so much that day and I was merely there to support them on this last stretch. I was there to make sure they got their butts across that finish line and that was exactly what I would do.

We kept each other company as we chatted here and there and ran as much as they were able. Pacing. It is not an easy job. There were tears. There were moments of wanting to sit, give up, scream, and more tears. There were moments of encouragement, hugs, love and happy tears. Every moment was worth it. The course measured long so when I told Bekah that we hit mile 19 and then noticed we were almost to 20, she asked if I had lied to her. I told her I would never do such a thing. I am pretty sure there were more tears shed. I told her that I knew she was tired, hungry and 100% ready to be done with this race.. but that she had to keep moving so we could make that happen.

We FINALLY made it back to the finish line and Bekah collapsed to the ground right after crossing. Race staff asked if she was okay and I simply replied that she was tired and hungry, but medically okay. We got her off the ground and into the pavilion where she could start to rest and recover.

Upon entering the pavilion, we saw Emily who had finished not long before us. She soon headed up to the warm building to sleep and rest while she waited for Fred to finish his race. 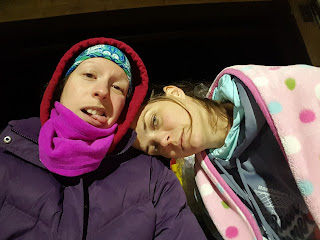 Bekah and I bundled up and waited for Fred to return from his loop before we headed home. It was cold and we were tired.. can you tell??

It broke my heart a little to see Fred when he returned from his 4th loop. He was very tired and very much unlike that happy go lucky Fred we all know. I have always heard about the dizzy, delirious and exhausted feelings people experience during all the hours it takes to complete a 100 mile race, but to witness them with your own eyes is a totally different story.  Nonetheless, the crewing duties called once again. We tried to get him to eat some food, got him new shoes and helped him out in any way possible. We told him he could and would do it. He wanted to sleep a little, but experienced Jade said "You've got 2 minutes! That's it!"

We sent him off and then a few of us headed home.

As I got home, I dropped my stuff down and headed for the shower. I headed to bed and checked facebook for updates every time I woke up. Eventually I saw this ...

I was so excited to see that Fred made it across that finish line with the help of his amazing crew and pacers. It was great to meet Chris and Jade. I am glad we got along well since, after all, we spent a LARGE chunk of time together Saturday.

If there is one take home that I can share with you about my crewing/pacing experience it is this. You are not there for you. You are 100% there for the person you are supporting. Every decision you make is for that person. We so often brag on ourselves and what we did, but this is definitely not a time for that. Not at all. It is a humbling experience to be such a support for someone else.

Just like a race or event that you complete is life changing for you, doing something for someone else's important race or goal is even more life changing.

With today being the start of the new year, I challenge each of you to do something new in 2017. It might be a little scary, it might be cold, it might be hot. But I guarantee you will learn a lot about yourself and how amazing it is to serve someone else.
Labels: 100k 2017 challenge brave crewing devil dog ultras frienship pacing selfless trail running volunteer