Chambersburg half- the new windy city

Back around the holidays, I decided that I would sign up for Chambersburg Half as my goal race for the spring. I was really hoping to finally run sub-2 hour, or PR at the very least. It was semi local and I had heard great things about the race from friends.

As the race approached, I got nervous. The weather was looking pretty crazy temperature and wind wise. I was not sure if I was going to be able to do it. I knew the race was hilly and was fine with that. I tend to get bored and uninterested during overly flat courses so this seemed perfect. Adding in the extreme weather conditions on top of the challenge of hills was a bit nerve wracking. I knew I could handle one of the other, but was very unsure about both at once.

Once again, we had an awesome crew come out for the race. I think we may have weirded out a few people as we tried to get this picture of our crew. 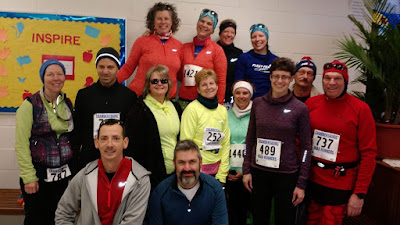 We were very lucky that this race starts at their local middle school where you can hunker down and wait for the race start. I think we all headed to the start line about 10 minutes before the race was scheduled to start.  It was super cold and I think below 10 degrees with the wind chill at the start. Not nice.

I started out really well. Hitting my paces on average for the first 8-9 miles. The rolling hills were tough, but I was tougher. I made it to the tops panting for breath and then enjoyed the down hill. Miles 4-9 were in a loop and when we hit mile 10 to head back to the start, we ran right into the wind. This is displayed in my paces for miles 10-12. My stomach began to feel a little funky around this point too. I am not sure if it was the cold getting to me or what, but these miles were the hardest to make it through and scattered with occasional walk breaks. I was trying to hard not to, but my legs started to feel like lead and it was inevitable. My legs needed a quick break and then I'd continue running. Once I was in the final mile, we finally got out of the wind and I was able to pick up the pace to the finish. It was not the strong finish I'd have liked, but I made it.

Despite the struggle, the next day during early bird pricing I signed up for next year. I need definite redemption! Overall, I really enjoyed the course. I was definitely never bored. There was almost always someone near by, but it was never crowded. The only thing I wasn't a huge fan of was having to weave back and forth across the roads because it wasn't a closed course. The course is mainly on back roads, so I understand that but having to cross for visibility purposes so many times seemed a little crazy. Safety first!! After the race, they have pizza and some other post race treats inside the cafeteria of the school. The awards ceremony is also done inside the warm school. 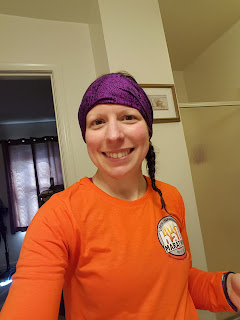 I didn't take any pictures after the race because.. well... my hands were literally frozen. Even once I was back in the school and got "warm" I was still shaking. I took this quick picture when I got back home to proudly display my new shirt. I decided to get one after the race because I felt it was well-earned after fighting the good fight for 13.2 miles (per the Garmin). 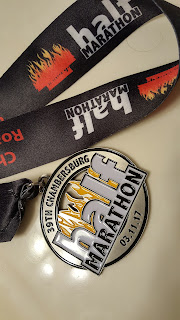 The medal was pretty neat. I joked that the flames were the fire I felt in my legs after all those hills. The legs were definitely dead and worked very hard at this race. Until 2018 my friends!!

Do you prefer flat courses or some with some rolling hills?