Last year was the  Inaugural Lucky Charm 5k/10k and it was so much fun I am glad they decided to do it again!!

Not even a week before the race, we hit a major snag!! 18 inches of snow slammed our area on Tuesday the week before the race. Everyone became very worried about the race because some of the paths used for the race would not be cleared by the city. Typically, once they are covered they remain that way until it melts. Unfortunately, that was not going to work for a race.

Enter amazing running community to the rescue!! Fred from our local Fleet Feet Mechanicsburg and the race director, sent out a call for help to clear the paths and was answered by quite a crew. Unfortunately, by the time my dad and I got there all that needed done was the salting, but they forced us to get into the picture anyway! 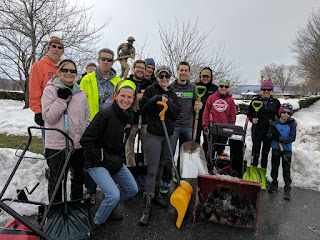 Thanks to this crew and the others that helped during the day, the race was happening!! And I am so glad it did. Even in it's second year, this race seems to be something that is growing into a really fantastic and fun tradition. 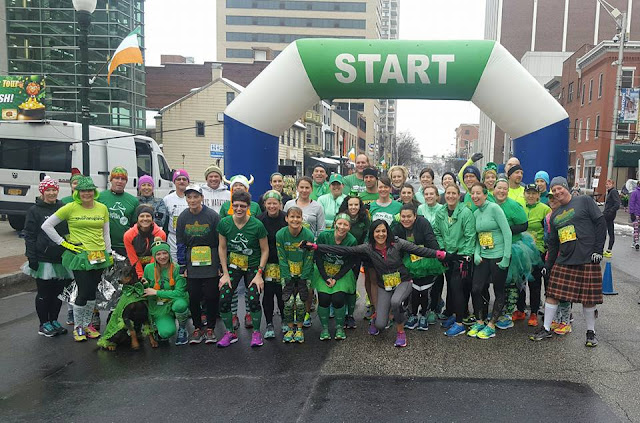 Hometown race= ALL THE FRIENDS ARE RACING!!! 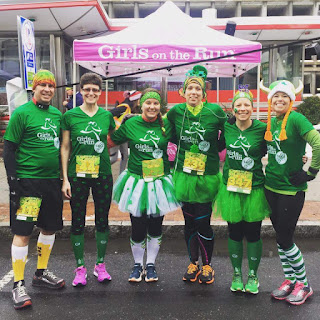 Also met up with some fellow Solemates for a pre-race picture.
I loved that our shirts this year were PERFECT for this race. 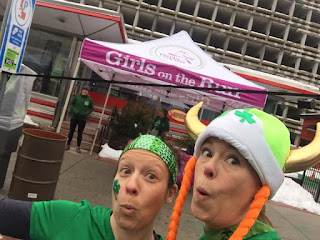 And maybe some silliness.

Another super chilly race start in the books. Before the race, there were a few announcements and a bag pipe performance- can you say COOL!?!

I started off with a few friends and quickly we had to decide what pace we wanted to settle in at. My main plan was just to see how I felt and go from there. I wasn't sure I was even going to "race" it, prior to starting.

Unlike last weeks Chambersburg half, this race was not hilly (at all) and no wind (major WIN). Given my strong start and feeling good, I figured I'd see what I could do. The course was a little different than last year due to traffic constraints, but I actually liked it even better!!

We started on 2nd street (where a lot of the bars are located) and weaved our way out to Front Street, through some neighborhoods, a quick turn around point half way then made our way back to 2nd.  Caught up to another River Runner around mile 2 and he got an interesting shot 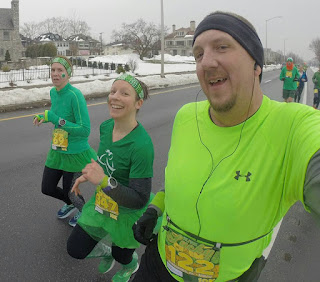 Running felt good, but my calves were a little cranky and tight. The small incline at mile 3/the turn around felt really nice.. with every incline, comes a decline!!

I started to look forward to getting back to the water stop which we passed around 1.5 miles. I had decided not to carry water with me because the water was so chilly and I was getting thirsty! An awesome runner friend was also there taking pictures and got this really cute (if I do say so myself) picture. 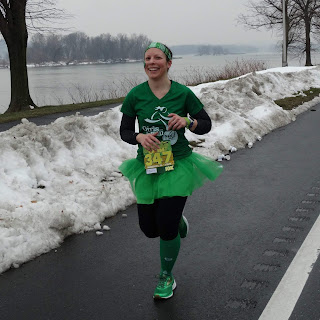 So I grabbed some water, and kept on going. I was amazed that I was able to pick my pace right back up and continued on towards the finish. After we passed the area known as "The Sunken Gardens,"

we got to go down a nice hill to the path along the river. The path down there is uneven in some places and there were puddles to dodge, so I kept my eyes down to make sure I didn't do anything stupid.

The hill back up from the river is always a challenge. It is the hill that ends pretty much all the Harrisburg races and the one that everyone hates. A few weeks ago, our training class had to do 6 consecutive hill repeats on that sucker for a workout so I knew it had nothing on me!! I climbed to the top and knew the finish line was close by. Only two turns and there is was!! 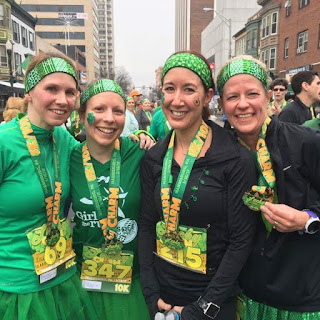 The absolute best part about this race? It is put on by amazing people and I get to hang out with so many friends afterwards. I had so much fun both while running and after. This year, a local bar agreed to give a free beer to all participants. Unfortunately, I don't think they were fully prepared for the massive amount of runners that would invade their bar. There were almost 800 people registered for the race and even if only half of them came to beer, that's still a lot. We had to wait quite a while for the beer and the staff did not seem at all excited to have to serve us. Needless to say, we got our beers and then headed elsewhere for food. 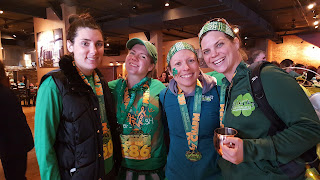 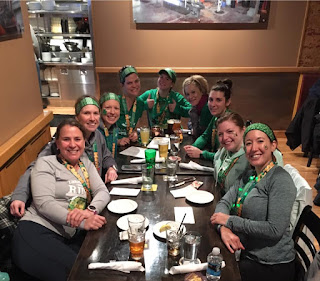 What a rowdy crowd at this table!! Met someone new and learned some new things about others. We totally missed being able to see the parade, but had an absolute blast.

I love that this race offers a 10k option- there are SO many 5ks out there and not enough 10ks in my opinion. This route is different than the typical races around here and also benefits my local Girls on the Run chapter which is near and dear to my heart. This year they even had girls from the program handing out medals at the finish- if that isn't inspiring, I don't know what is!! 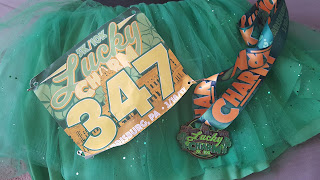