This past weekend was going to be my only non-racing weekend in a 4 week period. That changed quickly back on February 17th when a friend messaged me asking if I was interested in taking her bib for the Marine Corps 17.75k.

The race is not an easy on to get into and often sells out within 10 minutes of opening. My friend, even though she had another race (her first 50k!!!!) that same day, thought she'd try just for the heck of it. As luck would have it she secured an entry. So why was this race important? Completely the race gives the racer guaranteed entry into the Marine Corps Marathon (MCM). More importantly, this will be her fifth year running it and get her into the lifetime club.

So of course I said yes. This is a race I had never done and it would give me a chance to do something different and for a good reason. When I told people I was running this race, they got excited that I'd be doing Marine Corps Marathon again, so I had to explain the back story.

Anyway. On to the race itself. 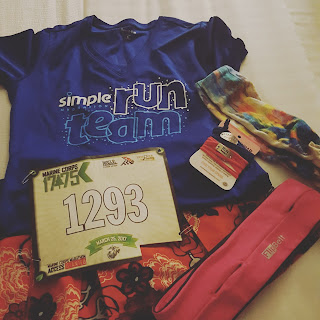 Friday afternoon we went to packet pick up on Quantico and then headed to check in to our hotel. I was happily surprised when I realized that one of the shuttle pick up spots was across the street from the hotel. I mean I guess it makes sense considering we were staying at the host hotel. I just hadn't thought about it. This made the husband happy since he now didn't need to get up before the butt crack of dawn. After dinner at Cheesecake Factory, we came back, got settled for the evening and hit the hay. Well, we tried to. Neither of us slept particularly well for one reason or another, but life goes on,

Saturday morning, I was honestly feeling anxious about running this race. Every now and then before races I have this thought of  "why am I doing this?" And "do I really have to run that far?" I was feeling all of these things Saturday morning. Yes, even though I love to run and love the thrill of the race, I sometimes DREAD the start line.

I got myself up, ready and out the door to be at the shuttle around 6:05 am. I was one of the last people on this particular bus so we left the lot pretty soon after I boarded. I sat next to a nice middle-aged man who lives in the area and was running the race for his guaranteed entry to run his 5th MCM. We talked a little about the slippery slope of running long distances too. I couldn't even deny it.

As soon as our bus arrived at the race area, I lined up in the bathroom line figuring it would both kill some time and that I would have to go by the time I got to the front of the line. When I got done, I messaged the one other person I knew was going to be there to find her. Funny enough she had forgotten her compression sleeves and I had a pair I wasn't going to use. Naturally, she was in another line waiting. I found her and then we headed to the start together. 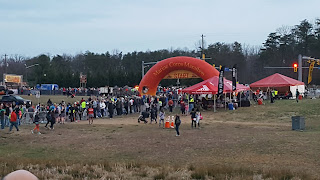 There was something awesome about seeing that start/finish line again. It is the same one they use for the marathon and brought back some neat memories. 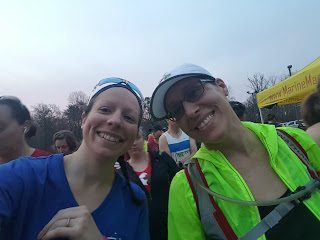 I decided we needed an obligatory "before picture" as we were slowly moving towards the start line. (hence the awkward smiles and head tilts).

The race started off on road and quickly we turned into the Prince William Forrest Park. I was so excited that a good chunk of this race was on gravel/dirt path. My first two miles were a much slower than I hoped because I was trying to get past people. There were 3000 people registered for the race and the beginning was definitely very crowded. But there was Captain America, so there's that. 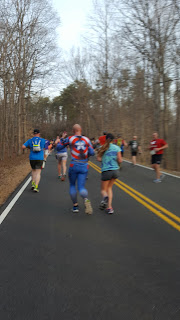 Around mile 3, we passed this nice creek that let off a nice, cool breeze. This was great because I was already SO WARM!! Mile 5 presented us with a HUGE hill that I was not prepared for. I ran to what I thought was the top, only to find it wasn't. I took a walk break there to try to catch my breath. Mile 6 allowed me to finally feel like I was getting into a groove again and next thing you know, it was mile 9 and we were back in the park. There were not a ton of spectators, but with water stations religiously found every 2 miles, who cares? The aid station volunteers were AWESOME and encouraging. 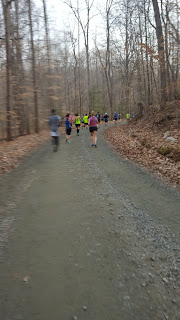 This was from around mile 9.5 and we didn't have much left. Except, you know, all the hills we went up and down at the beginning. I decided I was really just too hot to force myself to run up all of them. I took my time and enjoyed where I was instead. There was a small out and back after mile 10 before we headed back toward the finish. It became really crowded again and slowed me down a bit. Once we hit the road, I took off. I knew I had about a quarter mile to go, but my legs felt good and I was ready to go. 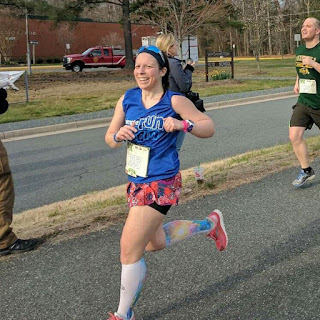 My husband was about a tenth of a mile from the finish and captured this photo. I wasn't sure I wanted to share it because.. my face.. but thought I better. It really shows the true grit of racing. Although this wasn't a goal race for me and was one I hadn't even planned on doing, every time we line up at the start line, the one goal we have is to get to the finish. No matter how long it takes or what we go through on all the miles in between.

This picture encapsulates SO much for me. Despite all the anxiety about getting to the race and the I don't wannas that the day started with, I had a great time. Running is like that. With each run I take, I come back a different person. Sometimes I am less stressed, the next I learned something new about a running friend, and after that maybe I just learned something new about myself. Sometimes you really just have to force yourself out the door and appreciate whatever the miles give you. 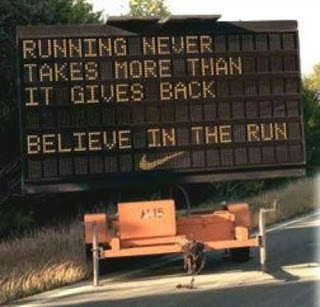 My take homes from this race. It was crowded. It was tougher than I expected. I want to do it again. This race was easily like none I had done before. A good split between trail and road was perfect and made my soul happy. Oh yea. And a Marine puts your medal around your neck. Who can't get behind that? And they cheer you on throughout the race. There is nothing more inspiring in my book. Just sayin. 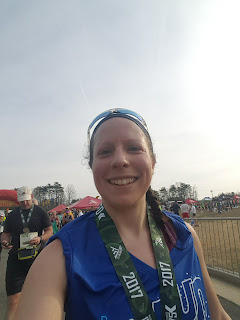 After I got through the recovery area (read: food and water) and found my husband, I took out my phone to text my friend to see if she had finished. Much to my surprise, she had already messaged me to see if I was still around for a picture. 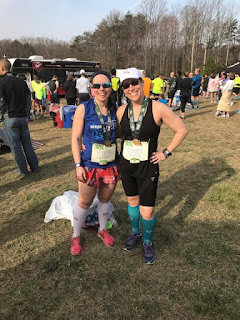 Even though we didn't run together, it is always nice to know someone else you know is at a race too. This friend is actually the one who usually runs 17.75 and MCM with the friend I was running with. They both have infectious smiles and laughs that will make you smile. What a fun and fulfilling experience. I don't think I'd run in a situation like this for just anyone, but I was SO glad I could help out. 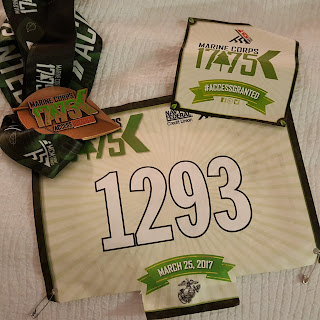 Hopefully I didn't bore you to tears with all the pictures and rambling. Sometimes races or certain experiences get me all emotional when you least expect them to. This was one of those times. I really hope I get the chance to run both the 17.75k and MCM again. These races, although pretty crowded, definitely hold a special place in my heart.

Have you ever run MCM or 17.75k? Is there a race that is crowded, but you still love to return to it any way?