Although it has been almost  a month since this race, this is a post I have been really looking forward to writing. This is the third year I have run this trail race and is by far my favorite year yet.

You see, last year was a pretty slow disaster. And the year before that, a snowy icy mess.

What did this year bring? MUD!!! ALL OF THE MUD. 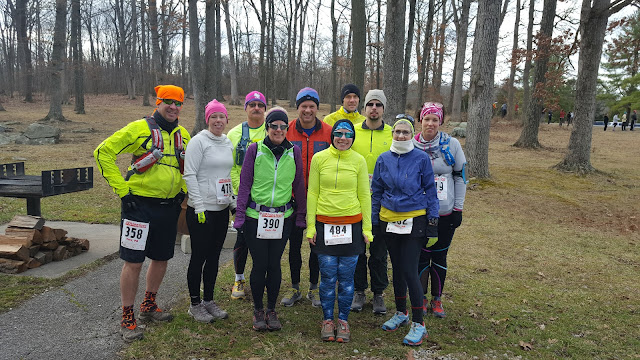 Before I talk about the race, I wanted to share this picture of just some of the runners where were there from our River Runners group. Isn't it awesome? We were probably missing at least 5 more runners. We were all such troopers with the cold and wind for this race.

So we got started and I was running with a few people from this group. By mile 2, I have no idea where any of them went. I just took off at my own pace and enjoyed the journey.

The mud started pretty early and I really had fun running right through it. It was pretty entertaining to watch all the different reactions to the monster mud pits. Some people stuck to the edges, some did everything to avoid it and then there were the people like me that went right down the middle. 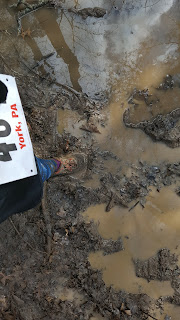 This is one of the only pictures I took the entire time I was running, but gives you an idea of how muddy and puddle filled some areas were. I only had the feeling of losing my shoe once or twice which pretty good considering some of the patches I ran through. 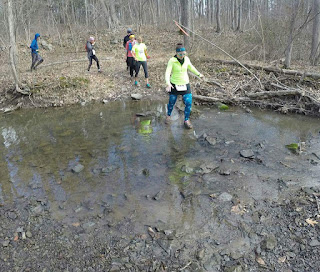 This was the only large water crossing in the course. Rocks were magically in places so that your feet didn't have to get wet, unless you really wanted them to. A fellow river runner captured this sweet picture of me crossing. Clearly I was focused and trying not to fall in the water.

There was one manned aid station at about half way which had some food and mountain dew. Before running an ultra, I never would have dreamed of drinking soda while running. I am ruined!! But seriously, I stopped and drank some dew and ate a handful of chips and continued on. I did actually have to take my warm layer off before I got way TOO warm. I ended up finishing the second half with my lighter zip up shirt on.

This year was also the first year for me where I ran very close to all of the course and was able to make decent time doing so. The last mile or two when the terrain leveled out, I was actually able to keep a pretty good pace throughout and finished with a 9:30 mile. Not bad for tired, but happy legs. 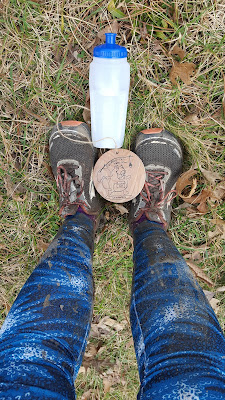 In the past, there was no medal at the finish line. This year they changed that and gave us a sweet wooden "medal." I was so surprised and excited when I realized this after crossing the finish.

At the urging of a friend, I went to put on more layers quickly after I finished then came back to the finish to see friends cross. They also tend to have really good chili, chicken corn soup, warm drinks and other yummy snacks in the pavilion afterwards. They never disappoint.

To say that I enjoyed myself at this race would be an understatement. I was legitimately on cloud 9. Sometimes life knows just what you need at the right time and I think this race was just that for me.

Do you like running in the mud? Have you ever run a trail race?