Last year, my lovely friend Katie asked if I was interested in doing this race called Double Trouble. It is a trail race that offers a 15k loop and you can run it once or twice. You don't even have to decide which one you are doing until after you finish the first 15k loop. The only caveat is that you MUST finish your first loop in a very strict 2 hour time limit. If you don't make the cut-off, tough luck. The race takes place at French Creek State Park which is beautiful and you should visit if you have the chance!

Between being newbies to the race and not being trained for 30k, last year we ran the 15k. For anyone not familiar, 15k is about 9.3 miles. We have a local lake which we use for training which is a similar distance, so we felt that a 15k should be more than do-able.

This year we strapped on our big girl panties and decided to go for the 30k. Two weeks prior, we did a 15 mile training run to remind ourselves that we were capable of running this distance even though we hadn't in a long time. We all felt pretty fabulous afterwards and got excited for the race!

I carpooled with a friend from our running group and upon arriving, we quickly found our fellow runners from home. It is always nice to see friendly faces at a race and having time to chat before the start helps ease any nervous feelings.. kind of. 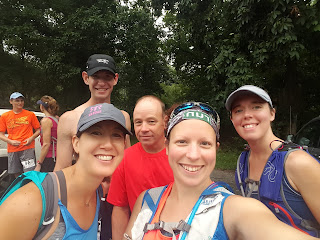 While we were waiting for the race to start, we grabbed a quick group selfie. The tall guy in the back is part of our group even though he makes us all look like we are standing in a hole! We all set out with the intentions of doing the 30k if we felt good and made it back in time.

Going into the race I was a little worried about whether I would complete the first loop in under 2 hours. Last year I wasn't thinking and donated blood two days prior and felt awful the entire race. I hadn't thought about it, but this was an extremely bad idea. It took me 2 hours and 7 minutes last year and felt so hard. Knowing I can do our loop at home in under two hours (even on a bad day) led me to believe 2017 should be much better.

The race director, Ron of Pretzel City Sports, starts the race by lining up the 15k and 30k racers on opposing sides of the start line. He then has the 15k side shout funny insults to the 30k side and vise versa. After all this is done, both sides merge to one as they start the race 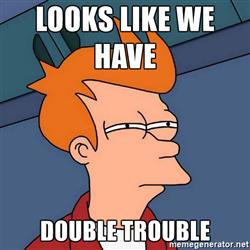 I tried to be very mindful of my pace from mile to mile to remain on track for the 2 hour cut off. I usually run trail races in a relaxed manner and don't worry too much about my paces so this was a little different for me. I was afraid it would ruin some of the fun, but it was actually a really great way to push myself and see what I was capable of. It was still really warm and humid so I wasn't sure what that would mean, but I was on a mission.

The first loop was pretty uneventful other than the last mile or so. There was a section where there were a few steps that were really wide which were really awkward for me and my short legs to run down. I made a comment to someone near by and here's the response I got: "That's what you get." I laughed and said "yea, darn genetics." We talked for a few minutes about our past experiences at the race until he decided to speed off and see what he could push for the last leg of his 15k. The last mile of the loop is pretty great because it is mostly downhill and easy to navigate. I was so excited to come in at 1:55 and immediately felt a rush of relief and pride that I would be able to make a second trip around the course.

Once I had the first loop under my belt, I took some time to walk and let my body cool off a bit. I soon ran into another man from our area and we chatted for a little about our decision to run the 30k and discussed our experiences during the first loop. After a while, I decided to run on my own and took off running. It was kind of liberating to be alone. Sometimes it is fun to pretend it's just you out there, enjoying a run in the woods.

I also decided that I would take some time to enjoy the scenery and take some pictures the second time around. 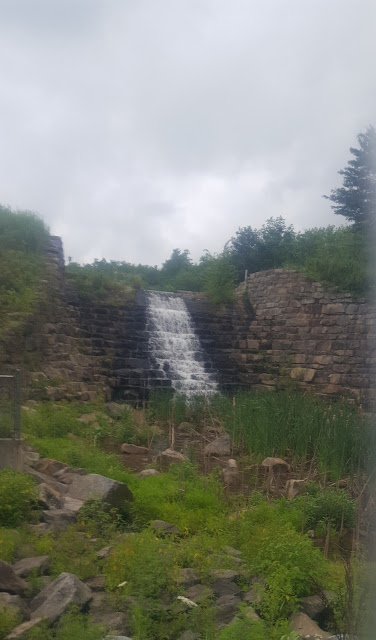 The first thing that caught my eye was this little waterfall. I love a race with some good scenery. After all, that's what the trails are all about. 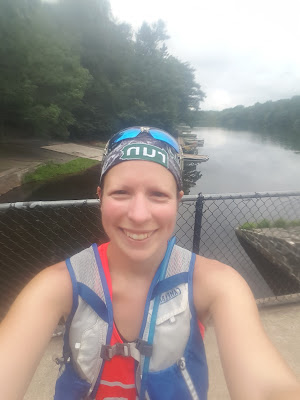 Last year this area was drained and all but empty for some repair project. It was so beautiful to see it full of water, allowing people to fish along the sides of the lake. 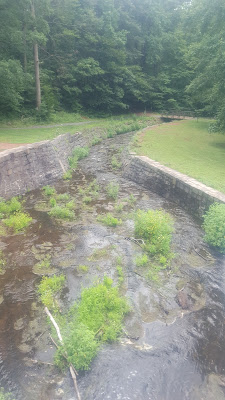 This picture got a little washed out, but this was on the other side of the bridge where I was standing in the last picture. 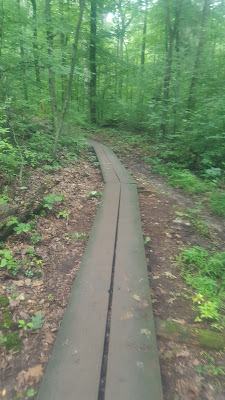 This little path wrapped around a short section of the trail. These types of "boardwalks" sometimes freak me out when the board is bowed and you feel like you are going to fall... all 3 inches to the ground. But still. 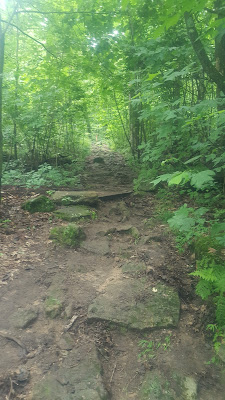 This is one of the longest climbs of the race. It is steep-ish and you start to feel like you will NEVER make it to the top. When you do, there's an aid station.. woohoo! The first loop I only relied on my camelbak filled with Tailwind, but the second loop I took the aid stations as time to get a little cold water and take a quick breather. At the last aid station, I got to talk to a man who was from Puerto Rico and had flown in the run the race in honor of a friend. He was here to visit for a few days before traveling to Virginia to see some other friends and family.

Once I was nearing the last mile this time, I got this second wind of energy that I rode in to the finish line.  I passed 3 or 4 people in that time and it felt great. I thought for sure I would be one of the last 30k finishers. Once I came off the trail and into the parking lot towards the finish line, I heard cheers from my friends that had already finished. Katie captured this amazing picture of me 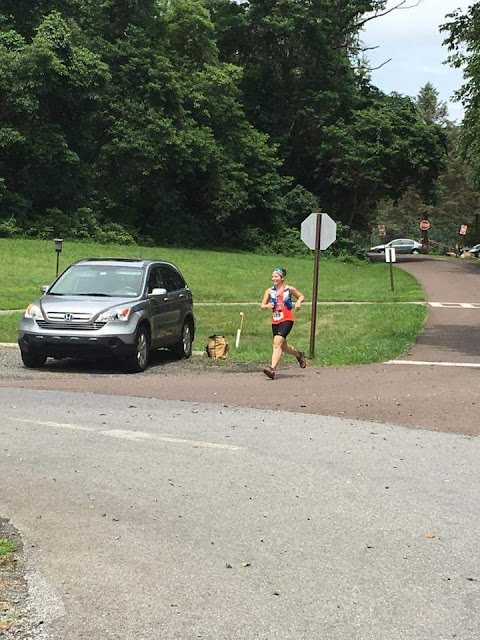 It is a little hard to see, but I am grinning from ear to ear. Although this 30k was not my longest distance run on trail, it was one of the toughest races I have completed. The course was rocky, muddy, and there was a time limit to complete the first 15k. This time limit was not something I was 100% sure I could beat, but I did and was so darned proud. I was smiling inside and out when I heard my friends cheering for me at the finish because I was so happy for the 4 hours I had just spent on the trail and for the experience.


My official finishing time was 4:12:06. Could I have done more? Pushed harder? Finished a little sooner? Absolutely, but that does not negate the experiences I had or the effort I put in to finish the race.

Have you ever run a do-over race and crushed it? Do you like trail runs/races? Tell me about it in the comments!