On Wednesday July 19th, I was signed up for the annual Harrisburg Mile for the second year in a row. Even after last year royally sucked and I thought I was going to vomit from coughing so hard when I was done, I signed up to torture myself another time.

I knew the heat was going to be an issue once again and that it would actually be a little more miserable than last year. My heat didn't start until 7:15, but I met up with friends around 5:45 pm to partake in a little adult beverage consumption prior to heading to the event. 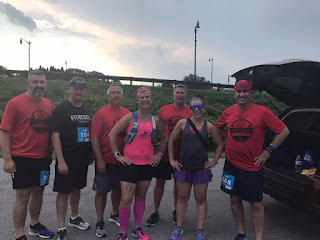 I shared a yummy summer shandy- some kind of pear flavor- with Bekah, then a few of us started a slow, sloppy jog up to the finish area. We saw a few friends, then headed to the midway point to drop our bags and then finally to starting area. 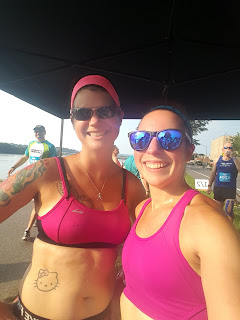 We found some more friends and stood to wait for our heat to be called. Unfortunately, the sky was getting REALLY black and we saw some lightening in the distance along with some rolls of thunder.

Before we knew it, the wind was blowing and the rain was unleashed on us. If you faced the wrong way, it felt like you were getting pelted with small pieces of ice. It wasn't, but really felt like it was.

The wind actually knocked over the nice blue START inflatable and it took some time to make a plan to ensure everyone's safety. Even after it was blown over, it kept hopping up from the ground as if it had a mind of it's own. I had my phone on me so I took a quick video.

That wasn't the worst of it, but you get the point. They eventually took it all down and delayed the remaining heats for 20 minutes to see how the weather played out. We saw many groups of people decide to run anyway and took off. We asked if the timing mats were still on and whether they would pick up our times if we crossed. We were told that they would not. Disappointed, we decided to stay put and wait it out.  After the initial 20 minute delay, they announced they were delaying an initial 20 minutes. This would have put our start time at almost 8pm IF they didn't delay any further. This time, everyone got smart and actually asked the timing guy if the mats were on and he laughed. He said he never turned them off and it should catch our times if we ran.

Minds made up, we decided that even in the heavy rain we would run our mile. We knew that the breeze and rain would be much easier on our bodies than the sweltering heat and humidity that earlier groups had to run in.

Bekah and I decided we would just run it out together and see what happened. We started pretty quick, but settled in to a nice pace. It's amazing how hard it is to run a mile at full force when you are so used to running for endurance. By the half way point I still felt pretty good which was a huge change from last year where I thought I was DYING. Seriously. I was.

We were getting closer to the finish and even though there was a little distance between us, I could hear Bekah getting closer and closer until she whizzed past me right before the finish. It's all good because I beat last year's time by a few seconds and felt so much better at the finish. (Read: I didn't want to die nor did I feel like my lungs were revolting against me.) Having not done a ton of speed specific drills and still coming out with a PR, I will call this a major case of WINNING. 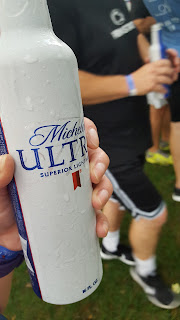 We made our way to the very thin crowd at the beer tent to get our free beer. Nope, it's not great but it was part of the race and a fun time to celebrate and visit with our runner friends after hauling butt for the mile. In the process of deciding to head back to grab our bags, we got distracted by these beautiful chips that were being handed out by one of the vendors. We asked someone where they got theirs and we took off. Bekah actually scored a half a box which she proudly carried around and shared (for a while). 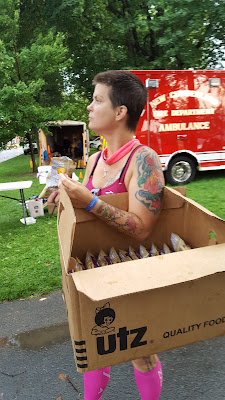 Once she decided she had made enough friends, she decided she wasn't sharing any more. I don't blame her!! They are the delicious UTZ naturals and I could have eaten them all night. I limited myself to 2 bags though, don't worry.

We eventually decided to make our way back to our stuff and say hello to our friends back at the midway point. 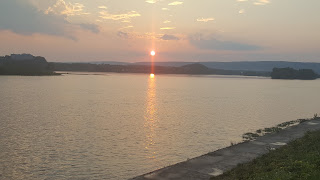 The skies had cleared and the sun was setting!! 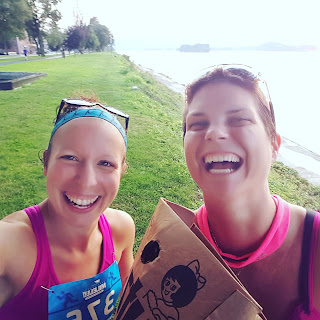 Not sure why we were laughing so hard, but nonetheless a goofy river selfie on the way back.

Despite the crazy weather and delays, we had a blast. We got separated from a lot our friends because of the weather and then running our own "heat," but I think it was quite an adventure for everyone.

Does your town have a mile race? Do you like to go ALL OUT or run it for fun with friends and family?