Sometimes it's Good to Suffer

I don't usually write about training runs, but I couldn't pass this one up.

Early last week, I reached out to my friend Jeremy to ask for suggestions on a different trail route to switch it up a little. I knew I had a 26 mile training run to do and thought it might be fun to branch out. Jeremy is a local badass ultra-runner so I knew he would have some great ideas. He didn't disappoint.

I will admit, I was a little worried about going it alone. All my usual partners in crime were on different training plans this week or out of town, but I planned on going and doing what I could. I am not sure why, but I was totally unsure of myself- even upon arriving to the starting point of my run. I was worried about whether there would be creepers on the trail waiting for me at 7 am. I was worried that I would fall and get hurt. What if I ran out of water or got lost? Twenty-six miles was not a new distance for me, but definitely daunting to complete alone and on a new trail. 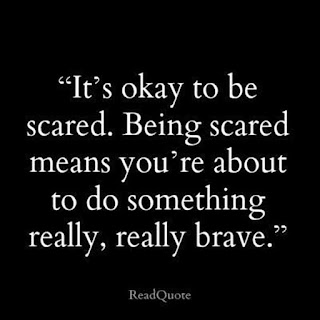 I don't know that going on a solo 26 miler was brave, but it sure was lot of things. It was an adventure. It was beautiful. It was hard. It was exhausting. It was exhilarating.

So where did Jeremy send me? He sent me directions to the Peter's Moutain trail head of the Appalachian Trail. As I pulled into the parking lot, I noticed there was just one another car parked there. After I parked my car, I walked over to the signs and maps to see where I was headed. Once I saw the sign pointing North on the AT, I headed back to the car to get my gear and began my run. 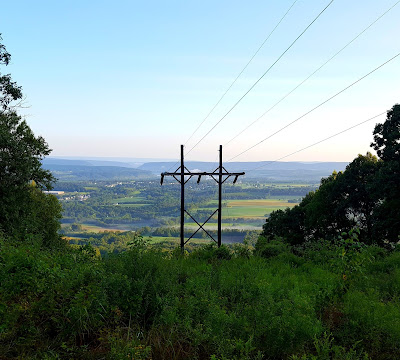 I could hear the power lines crackling as I approached and imagine my surprise when I saw the sweet view as I looked out. This picture does 0% justice at how beautiful it is up there. 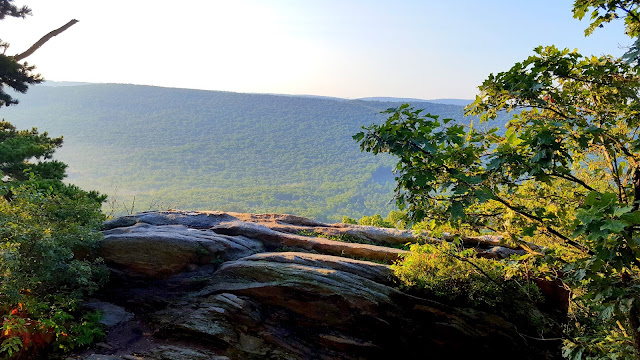 Then there's this. Table rock. I am pretty sure I gasped at the beauty. Jeremy didn't tell me about any of this in his trail instructions and I am so glad. It was such a wonderful surprise. I hung out for a few minutes then knew I better get going.. 24 miles to go.

I started down the trial and realized quickly that the majority of it was rockier than pretty much anything I have ever run on. I did ask for something a little more technical. Check!! It also became apparent that there were going to be periods of HIKING. During the next 4 miles I saw two groups of people camped out along the trail, both of which I said good morning to and they returned the favor. I was already feeling more at ease. 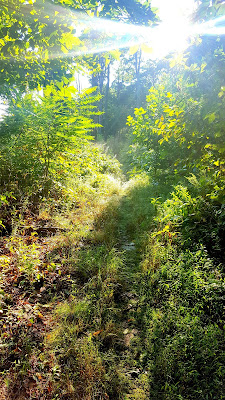 This section left my feet soaked with all the dew on the grass and weeds. I also had to be careful not to fall since there were rocks underneath.. of course.

I kept trucking along, anxious to get to the road crossing around mile 10. Before I got to that point, I did run into the first hikers I had seen yet. A group of teenagers hiking together and an older woman. I quickly thought how amazing she was out there by herself, looking like she had maybe spent the night somewhere on the trail as she had a pretty big pack. 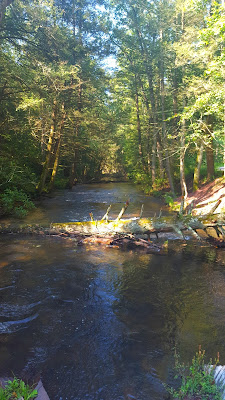 Another surprise along the way was this really beautiful area I found around mile 10. It was so peaceful and cool so I soaked it all up for a few minutes and kept on towards the half way point! 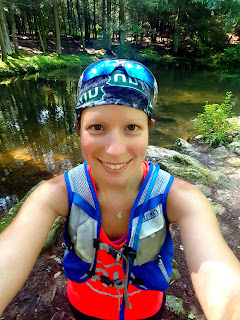 On the way to my turn around point I ran into two more hikers that I knew had to be through hikers; meaning that they were hiking the whole AT from Maine to Georgia. How could I tell? Their smell. I know I didn't smell too fresh at this point, but I sure smelled better than them! 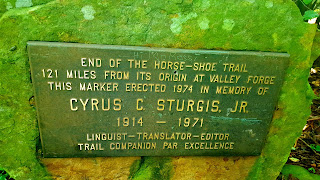 This little plaque was at my turn around point which was, you guessed it, the end of the Horse Shoe trail portion of the AT. Another day it would be fun to start at this section and continue past to see what the next section holds.

Now that I was half way done, it was time to turn around and make my way back which I knew was going to be just as much as a challenge as it was to get here. Even though I knew it would be tough, I knew I could do it.

I took a few more photo opp stops on the way back. I just couldn't help myself. 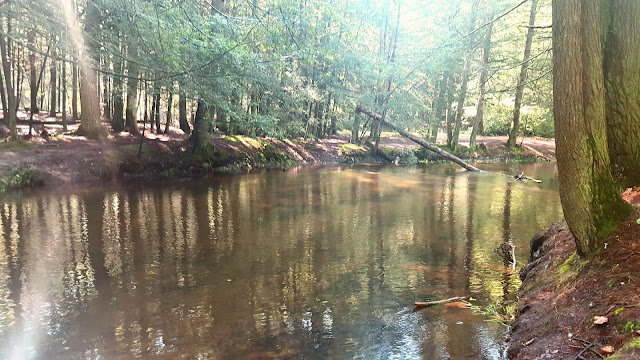 Back at the same watering hole, this time at 16 miles. 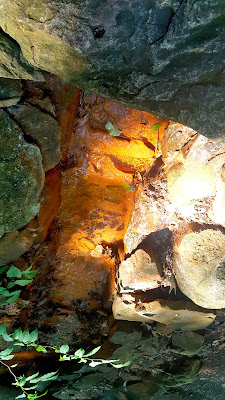 I thought it was interesting how ORANGE the rocks under this little water stream was. Iron? 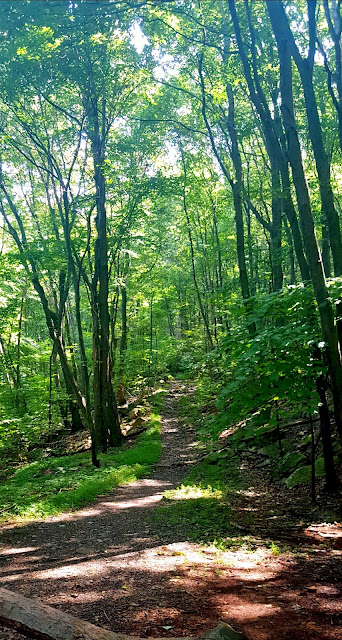 It's not super easy to tell, but that path is a pretty steep rock "staircase" which I got to run down on the way back. Much better than climbing it, but don't worry I still plenty of climbing the second half of this run. Sometimes it's good to suffer.

Right after I came through this section, I caught up to the through hikers from before. The funniest part was smelling them before I rounded the next corner in the trail and actually saw the one. I actually walked with one of the guys and talked to him for a few minutes. He and his buddy were fresh out of college and had started in Maine on June 7th. They just hit the 1,000 mile mark which he said was half way mileage-wise, but over that time-wise. They are hoping to finish by October 31st. What a way to kick off the post-college life. I thanked him for the chat and wished him luck on the rest of their hike!

Around mile 20, I knew I was getting really close to emptying my water pack... and then I took my last sip. I really hoped that I could manage the entire 6 miles without water. I sure wouldn't be eating anything else either because I now I had nothing to wash it down.

Thankfully, most of this route was shaded and relatively cool. The breezes were so refreshing and felt wonderful. I kept thinking to myself how much better this was than 26 miles would have been on the road today. 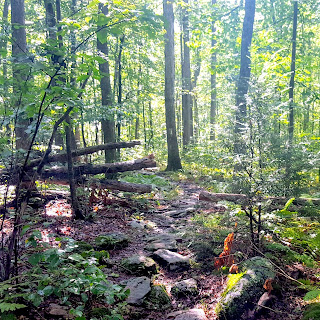 I trudged on, mile by mile. Climb by climb. Hiker by hiker. By this time, there were quite few groups of hikers pulled along the side of the trail eating lunch and enjoying a break. Not me. I said hello and kept on moving! It would have been nice to sit, but it was much better not to. 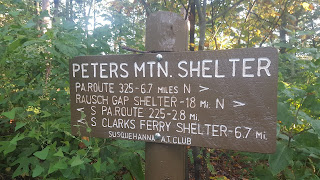 When I got back to this sign, I knew I wasn't too far away (about 3 miles) from being done but I was still thirsty. I decided to detour to the shelter and see if there was a water pump or anything. There was a pretty decent crew hanging out there who told me there was a spring, but that the path down was pretty steep. I quickly knew that was not happening and that I would rather wait until I got back to my car. What was another 3 miles? Sometimes it's good to suffer. 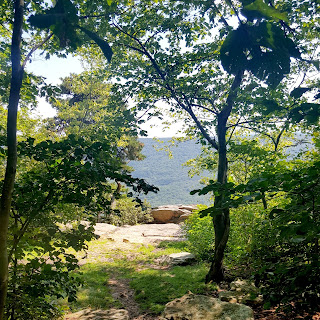 I took one last peek at the Table Rock. How could I not?

With about 1.5 miles left, I approached an older man who was out for his Sunday hike. He scooted to the side and said I was welcome to pass. Instead, I slowed to chat with him a little. He told me he often comes to this area to hike and how much he absolutely loves it here. I told him I was going to take off because I was thirsty and was ready to get back to my car, but that it was nice to chat with him. He told me that he usually carries water bottle with him. I explained I had water, but ran out. His response? Sometimes it's good to suffer.  He was 100% right. Or maybe I was just tired.... but it really resonated with me.  Isn't that why we push ourselves to our limits? We like to suffer.. just a little bit. Maybe suffering while trying new and challenging things is a reminder not to take ourselves to seriously, but also to remember how great it feels to suffer a little? Being thirsty wasn't my idea of a good time, but the challenge of this whole day was the perfect reminder of how great it could felt to step out of my comfort zone. 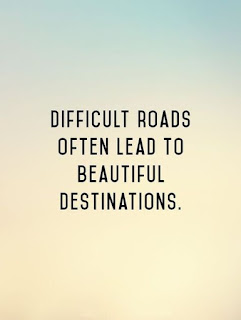 Once I arrived back to the parking area, I was at 26.04 miles and I decided to run down and back up the entry way but still came up a tad short of the 26.2 miles (marathon distance) I wanted. There was a little walking bridge to travel south on the trail so I decided to check that out. Much to my surprise, another fantastic view was waiting for me. 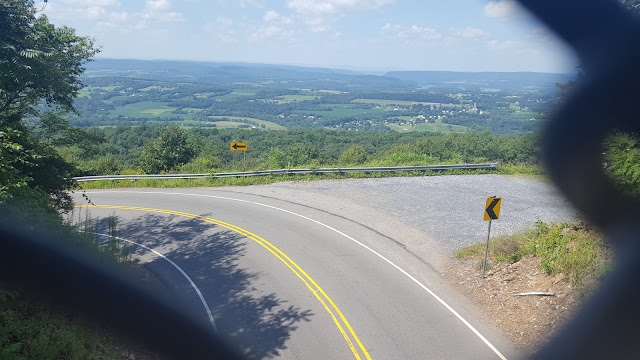 Just wow. Although I was so tired and glad I was done, I would not trade this experience for the world. I learned I can do hard things, including climb almost 3675 feet of elevation!! I can even do it alone. I would have preferred company, but this reminded me that I am 100% capable of going it alone. Sometimes I get so used to having friends to run with that it is easy to forget what I can do on my own. The solitude of a trail 26.2 miler was definitely like nothing else. But hey, sometimes it's good to suffer!!! And even though they tell you never to talk to strangers, it's okay on the trail... just sayin'.

What have you done that pushed you out of your comfort zone and scared you a little? Or a lot?