I took the day off work Friday so that I could sleep in a little and take my time getting ready to head to West Virginia for the Freedom's Run marathon. Something really cool happened on my way there, something that only a runner can appreciate. About 30 minutes into my drive, a car passed me on the left, honked and waved. It took me a second, but I realized that the drive did this because he, too, was runner with multiple 26.2 stickers on his bumper. A huge smile came over my face. Really awesome run nerd moment, right?

I picked up my packet Friday afternoon at Shepherd University in WV. My sister lives about 20 minutes away so I stayed at her house for the weekend. It is always fun when I can mix my race schedule with some family time as well. Friday night was pretty low key and I went to bed a little later than I should have (OOPS!!). After my parents arrived, we talked about places my family could come out to see me along the course and got a little plan in place so I knew where to expect them.

I had two options for the morning: 1. drive back to the University for the 6am shuttle to the start or 2. park at Harper's Ferry National Park (the start, about 10 minutes from my sister). The only real difference was how much extra sleep I could squeeze in! Harper's Ferry was closer and meant I could leave the house almost an hour later so that option WON by a landslide.

Not so fast. Around 5 AM, I woke up in panic after a bad dream that I actually woke up after 8:30 am and missed the start of the race. It's been a while since I have had one of these awful dreams, so you bet I got up right away when my alarm did go off about 45 minutes later.

I arrived at the starting area around 6:30 am because I wasn't sure if/when they would stop traffic from entering and did not want to miss the start. I had bundled up on sweats and stayed in my car until about 7 am because it was still only about 55 degrees. I headed to use the bathrooms which had no wait which is definitely not something I am used to. There were porta pots and some regular indoor bathrooms for use because it was a state park. Total race win in any runners book. 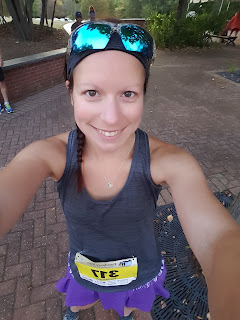 I'll be honest, I was a little intimidated standing at the starting area of Freedom's Run Marathon Saturday morning. It wasn't like I was worried about completing the distance; after all, I did just run 45 miles at the beginning of the month. Actually, that was kind of why I was intimidated!! I haven't done much long distance road running since June, so staring down the starting down the starting line of a road marathon made me a little antsy. This would be my third marathon and my first in almost two years. What if I get too sore? What if I am bored to death? What if...?? All what if's aside, I was pretty excited to see the scenery and figured whatever happened was going to happen regardless of the thoughts inside my head!

The beginning of this race was actually part of the Harper's Ferry half too.. something I was happy to see a repeat of. In May, I missed this amazing overlook until they posted pics from the race and I was so bummed. This time around, I was determined to take a moment to soak up the scenery and I think I achieved that goal. 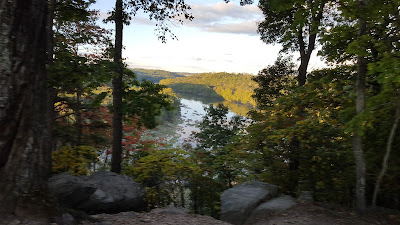 I could have stayed there for a while but I had a race to run!! On the way out from this area, I received my first of two compliments on my Skirt Sports  running skirt. Someone on the other side made a comment, then an older man with a British accent nearby also chimed in. Little did I know that I would share over 10 miles with this man and learn quite a bit. He got into running as a way to turn his health around from near death to a very healthy, thriving life. He has completed many triathlons and has been doing marathons every weekend for the last month and will continue for a while longer. Why? He is training to do the marathon on every continent challenge and is using this to raise awareness for children's mental health. I told him what I did and that we were meant to run together. So impressive. 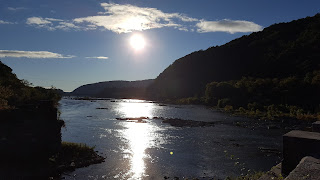 A mile or two after I started running with him, we joined up with a woman from Georgia. This was her third marathon as well and she shared stories of her previous ones which I, unfortunately, can't remember what they were. At one point, she told me that if she was talking too much, I should feel free to tell her or go on my way. I told her there was absolutely no need as she was keeping me entertained on the 10 mile stretch of the C&O Canal. This was the section I was MOST worried about being bored on, but thanks to these two running friends, the miles flew by. 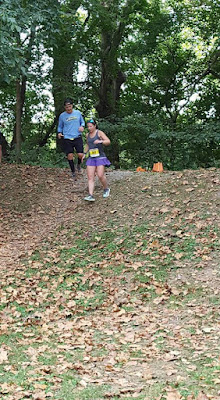 I got to mile 15 where I could see my family waiting for me and got caught off guard at how steep the hill down to the aid station was! Steepness aside, it was so great to see everyone there cheering for me. I swapped out my Simple Hydration bottle for another with a different flavor of Tailwind and hung out with everyone for a minute before I headed back to the course. 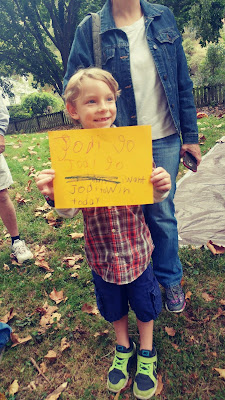 I loved this little cutie's sign it says "Jodi go Jodi go I want Jodi to win today." What a sweet kid.

Not too longer after, they surprised me by cheering again as they drove by. I would see them a few more time on the course in those last 11 miles. It brought a smile to my face every time to have a van of loud hooligans cheering for me! 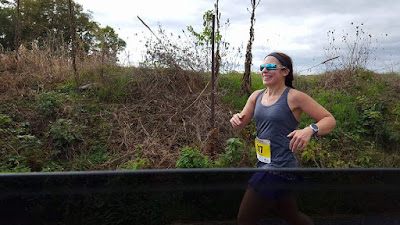 No big deal. Just floating along. Just kidding. Some of those hills SUCKED. But I cannot tell a lie, the views during this whole dang race were killer. So beautiful. 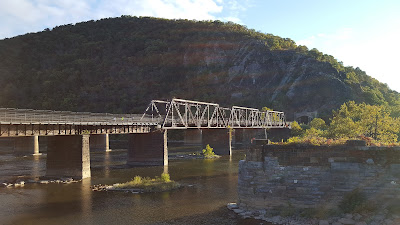 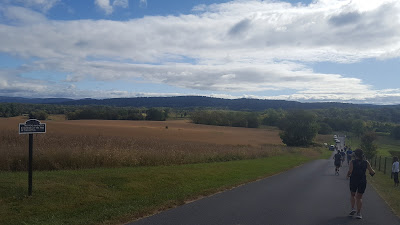 This is the beginning of the hilly but so lovely Antietam National Park. 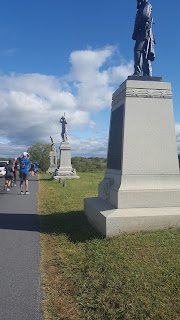 I need to make it a point to actually go back to Antietam to explore and read more about the people in these statues and all the plaques throughout. 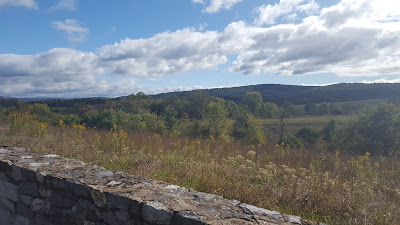 I took plenty of time to take joy and happiness in all the simple, beautiful views that were all around me. There was so much to take in. (Brad, are you noticing all the clouds? Of course you are...) 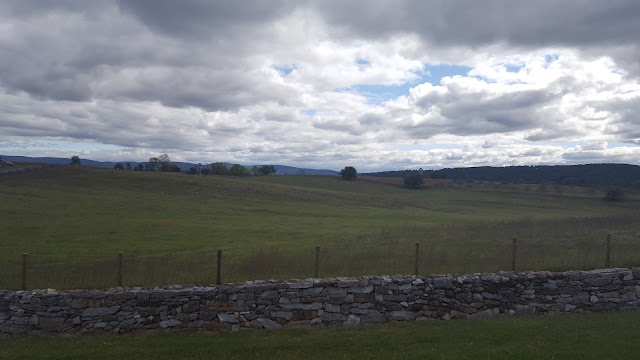 The last few miles were long and short all at the same time. I don't know how that is even possible. the first two marathons I ran felt like death by the time I was nearing the last few miles. Not this time. 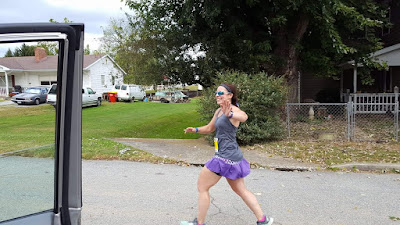 I was in a groove and took super quick walk breaks to shake out my legs and then kept going. As I neared the finish line, I knew I was going to PR.. BIG TIME. Serious emotions. The finish was on the 50 yard line of the football field at the University and as I was about half way there, I heard them announce my name. I just kept on trucking until I saw that finish line and the sweet numbers 4:25. 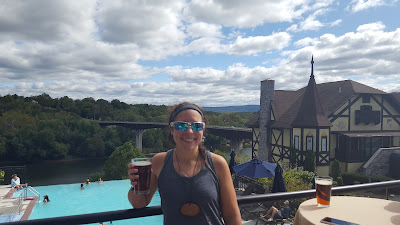 The kiddos had gotten hungry and my parents thought they had plenty of time to get food. Little did they know I would finish right after they got their food and sat down. I found the woman with whom I had shared most of the time after the C&O canal section. We hadn't talked much while we were running, but later agreed that we had enjoyed each others company nonetheless. I had "met" her early in the race and learned she was from Lancaster (about 45 minutes from me), so when I saw her in later parts of the race I made a point to say hello and encourage her.  We walked over to the post race festivities at the Bavarian Inn and got our free beer (of course) and soaked up the beautiful view. 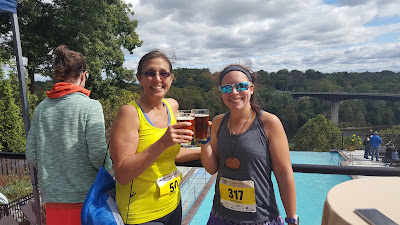 Cheers to a challenging, beautiful course!! The support and aid stations were great and I don't think I could have asked for a better experience. But no one told me my hair was such a hot mess!!! At least my TreadBand stayed in place and my hair never got in my face. Silver linings are everywhere if you look for them. 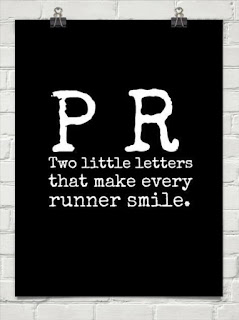 I am not one to brag, but I need to have a moment here. I have worked super hard the last two years- many hours of training that included speed work and long (and really long) runs. Add to that figuring out what exercises I needed so that my body wouldn't revolt and finally being able to enjoy most runs pain free. This has been one heck of a year for me as far as running goes and I'd be lying if I didn't say I was incredibly proud of myself. I PR'd by over 35 minutes. That's kind of a big deal!! I finally feel like I am in a great long distance running groove and I am enjoying every minute. The connections made over the miles are incredible and something that I think only runners can really understand.  I couldn't have accomplished any of this without my training with  Fleet Feet Mechanicsburg and all the amazing people I have trained with this summer/fall. It's never easy, but
guys.. it really is always worth it. If you put in the work, the results will follow. I am done being weird and mushy now. 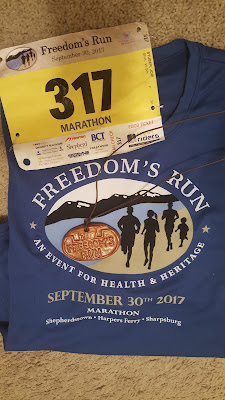 What running accomplishment are you most proud of?