Last summer while visiting my sister in WV, my mom found a flyer advertising some local races. There was a spring half, 5k and kids fun run as well as a fall full, half, 5k and kids run. I knew these events had to go on my 2017 calendar.  The best part about the spring race, Harper's Ferry Half Marathon, was that my sister lives about 10 minutes from the start line. The half marathon started at 8:00 am at River Riders which has both water activities and an adventure park with zip-lining and other really neat stuff. I hope to go back another time and explore.

Back to the race though...

Communication leading up to race day was awesome and ensured I wouldn't miss a single detail. Friday evening, packet pick up was at the Clarion hotel right behind/above the River Riders location. The process was simple and we were in and out without a problem.We even had to switch my oldest nephew to the 5k since online registration only let my sister's sign him up for the fun run- this was also super easy. Friday evening I received an email encouraging us to be at the parking lot for 7:15 am due to traffic and parking.

Saturday morning I got up a little after 6 to make sure I had plenty of time to eat, get myself together and get out the door to the race. Funny enough, I actually missed the entrance to River Riders, had to make a U-turn and still made it in there by 7:17 am. I was a little worried when my car slipped a tiny bit in the mud as I was driving to the next spot, but I parked and got myself settled. Because it was chilly, I sat in my car for about 20 minutes or so until I heard some loud announcements which turned out to be the RD talking about the course. When I got out of the car and took off my sweatshirt, I shivered a little thanks to the mist coming down.

On my way to the starting area, there was an older man that I made a comment to which then turned into chatting with him until the start of the race. He was relatively new to running and also plans to run the fall marathon. We shared our training plans for the summer and what events we had coming up. He told me that his plan for the race was to take it easy and enjoy it as a training run; I told him that I was going to enjoy the run as well, but also see what I could do pace-wise. We both knew it would be a challenge and just wanted to enjoy it. It was so fun to see and cheer for each other as we passed on the out and back areas.

The race started on the downhill in front of River Riders and then headed into some grassy paths and hills. 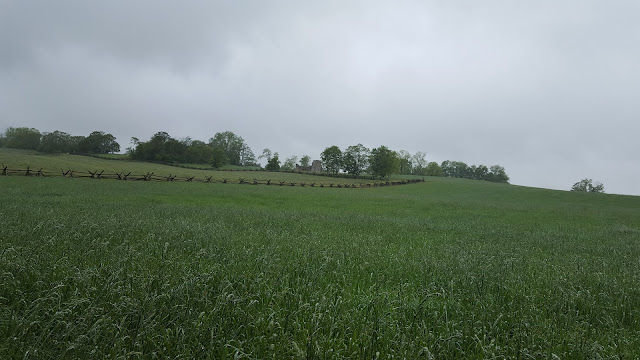 By mile 3, we were actually back to the start line which meant -YES- climbing back up that hill we ran down at the start. It was perfect timing though, because I got to see my husband and oldest nephew as they were waiting for the 5k start,

After we clawed our way up the steep hill, we headed to a short section of trail and then to a path of sand/pebble mix filled with puddles. This was a short out and back section with some nice views at the turn around, or so I heard. 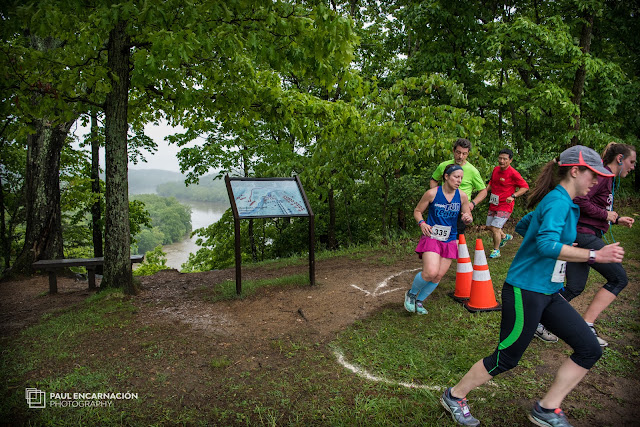 See that big opening over there?? Apparently there was a gorgeous overlook, but it wasn't until these pictures were posted that I even had a clue.  There were groups of people in later pictures who actually stopped for selfies and to enjoy the view. I am so bummed to have missed out, but vow to pay better attention next time.

On the way back out of this section, I talked to the girls ahead of me in the picture above. One of them had on a Hershey Half race shirt from 2016 and I asked if they were from the area. Turns out they were from Lancaster and had actually run Hershey as their first half! This was extra cool since it was my first back in 2013 as well. We chatted as we headed into the next section of the race which was dirt trail, my favorite! The trail little muddy and we were not on it for too long before we headed back out on the road.

There was a really nice long down hill and it felt great to finally let lose and just glide down the road. One girl even joked that this was her favorite mile of the race so far. Little did we know just how much we were in for in the remaining 7 miles of this race. 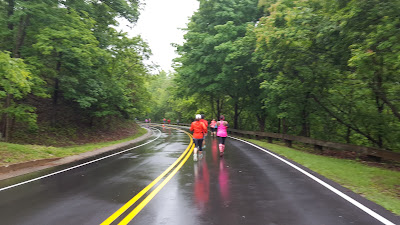 From here we made the journey into Harper's Ferry National Park. There was a little bit of trail before coming out into this really beautifully foggy area where I slowed to take these two pictures 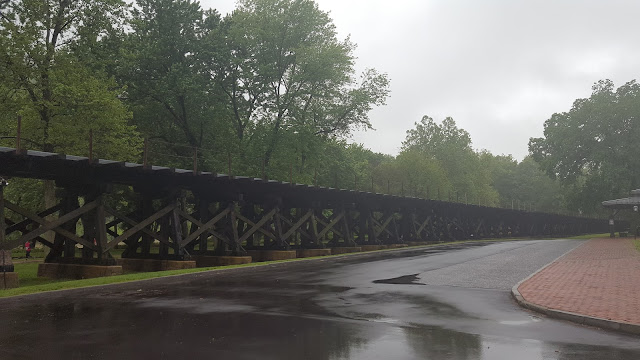 From here we headed up the HUGE hill into Harper's Ferry. Remember the girl who said that the earlier downhill was her favorite mile? I ran into her again at this point and we kept passing each other until we finally made it to the top. I took walk breaks when my legs burned so badly I couldn't lift them to run and kept running as much as possible. It also did not help that the rain really picked up at this point and I had to keep wiping the water from my eyes so I could see where I was going. There were so many awesome cheer crews and people in town it really lifted my spirits after that insane hill. Knowing that we would get to go back down that hill later was also an amazing feeling.

The path back through Harper's Ferry had us detoured through a neighborhood and got to come down a steep hill to another impressive view. 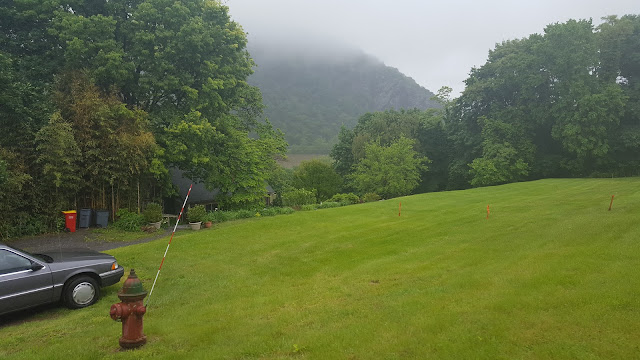 Not the best picture but you get the point... look at that FOG!

From here,  we got to finish the descent back out of town, Seeing people with coffee and smelling the pastries in the air was really hard; it all smelled SO GOOD!! 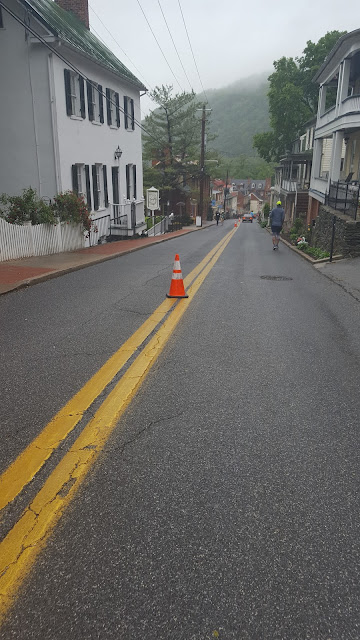 By this point we are around mile 10 or so and I remembered back to the speech from the RD at the beginning of the race. He told us to save our energy for the last climb from mile 11 to 12. DUDE. He wasn't joking. The nice hill mountain we came down around mile 5-6 was there to greet us with a vengeance at mile 11. I don't think there was a single one of that wasn't cursing or joking about how ridiculous this was. Hadn't our legs been through enough? Either way, we all got up the hill one step at a time. I grabbed some cold water from the water stop and then joyfully ran back onto the trail we had previously visited. This was the beautiful trail full of sloppy mud from all the feet before me. One trail led to the next that led us through the KOA campground and to the final mile of our journey. I started to realize how trashed my legs were but knew we were close to mile 13 and almost done. I exit the trail to be faced with.. I kid you not.. a grassy UP HILL which was soaked from all the rain. I hiked up the hill since my legs were too pissed to do anything else. After I got to the top, I was able to see the finish and ran as best as I could across the finish. What a crazy race!! My official time was 2:12:09, but there was no timing mat at the beginning of the race. My watch time was 2:11:48 and either way I figure I finished a really hard race and was 57/198 females at the race so I will take it! 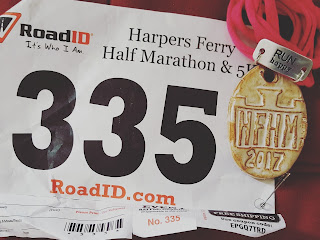 While I was out on my 13.1 journey, hubs and the oldest nephew conquered the 5k which was the first section of the half. 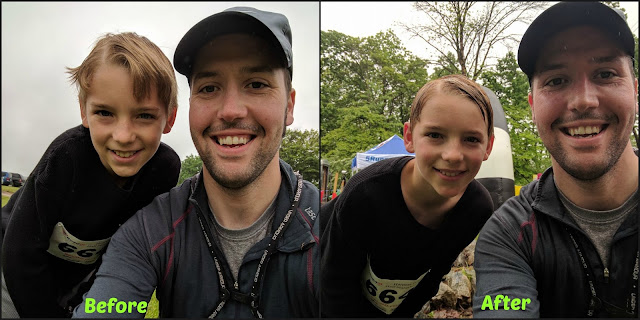 They got a little wet too!!

While we were waiting for the kids fun run, we had some pizza and you better bet I got my beer. My legs were trembling for a good 30 minutes after we finished. And check out these dirty shoes!! 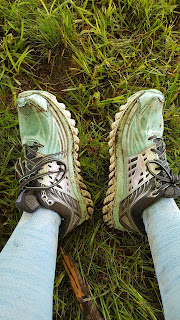 The kids were so antsy and excited to run their race. The oldest kept saying how much his legs hurt from the 5k, but then KILLED the kid run. 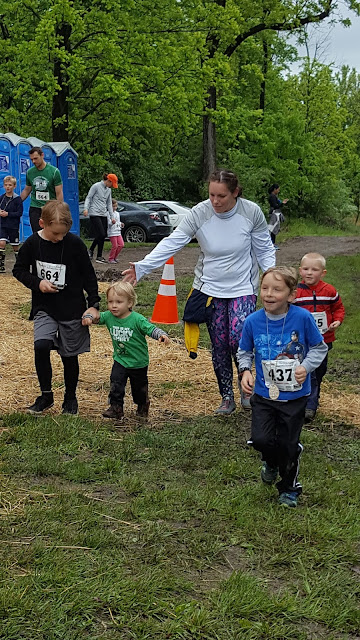 Here is a sweet little snapshot with all the kiddos and my sister. All the older boys ran back to run mom and the youngest in to the finish. The youngest will be two next month and did a great job. Their course was down hill and back up for a total of about .7 mile.

Despite the weather being weird, I was so glad that we were all able to take part in this really neat event. If you made it to this point in the post, I applaud you. I try not to make my posts too super long, but I couldn't help this one. There were so many details about the race and so much to tell. Heck, there are still things to tell that I left out.

Bottom line is YES this was a hard race but would I do it again? HECK YES.  The water stations were great, the support was great and I loved that we got to run through such neat areas. Who wants to join me?

What's the most challenging race you have ever run?