For the past few years (2014 and 2016, apparently skipped writing about 2015), my oldest nephew, Adam,  and I have held a tradition of running a glow run. Due to other commitments, I was unable to complete the one we normally do and I was so bummed. As I mentioned the other day, I promised my nephew a glow run this summer to make up for it and set out on a search for other local races.

Sadly, there were just two options. One which we definitely could not do and one that I had a prior commitment on the same day, but that would work out. It made for quite an interesting weekend but I wouldn't trade it for the world. After crewing for part of the day, I headed out on the almost 3 hour drive to Carlisle because even though it was called The GloRun Harrisburg, that is where it was. It worked out perfectly. 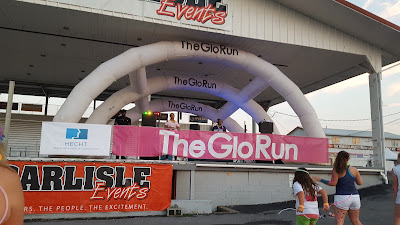 I knew exactly one other person doing this race and we met up with Rick beforehand since he was nice and got our packets for us. He also kindly warned us not to park on the actual grounds because they were charging for parking! What a bummer, considering we already paid for the race itself. We parked a few blocks away and it was no big deal. We got all of our glow accessories on and headed into the fairgrounds. 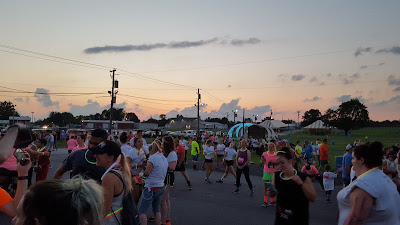 Inside the fairgrounds, they were playing fun music before the official event started. There was also a Luau costume contest, but we did not participate.. maybe next time! Adam did enjoy dancing quite a bit though and seemed to have a good time. 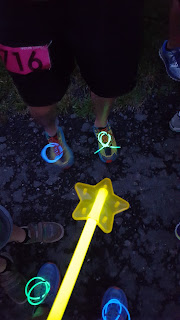 As if we didn't have enough GLOW, they were throwing out more glow necklaces prior to the race. Rick and I got fancy and put them on our shoes.I couldn't figure out how to get anything extra in Adam's shoes, but I think he still made out ok. 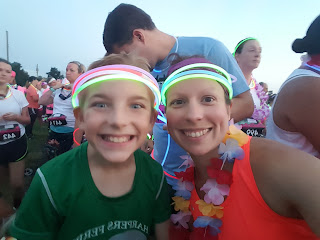 As you can see, we put all the necklaces on our heads... why not?! 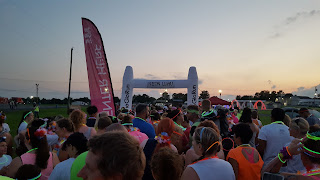 There were TONS more people behind us. I was impressed with the turn out; since I wasn't able to find out much about this race I wasn't sure what to expect as far as crowd size. 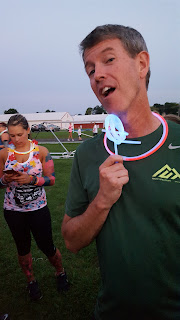 Just a goofy man and his glow pop? I have no idea. 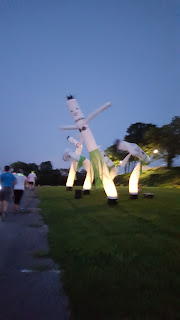 This is a pretty awful picture since it's really hard to photograph and RUN, but they had these things dressed up in little hula skirts and shell bras. Pretty funny to see as the first light up inflatables. We passed a few others, but once I saw the huge pineapples that was all I could focus on. 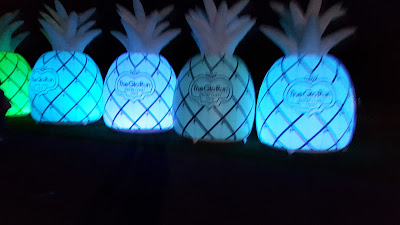 They were super HUGE and changed colors. Another picture taken on the run.. because Adam didn't want to stop and "waste time." HAHA. I like this kid. I told him we would come back after we got done. In years past, we have had to stop and take walk breaks because we'd start off too fast (even when I let him set a pace he was comfortable with.) This year we kept a much more even pace and Adam only needed two very short walk breaks. I was so impressed!! 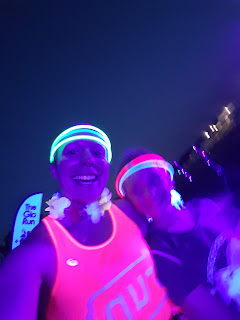 This section was pretty neat too. It was full of black lights and BUBBLES!! We both might have squealed a little when we realized how many bubbles we were running through. I don't care how old you are, bubbles are sweet. You are never too old to play with bubbles, if you think you are, you're wrong! 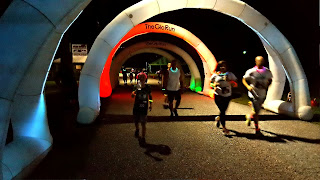 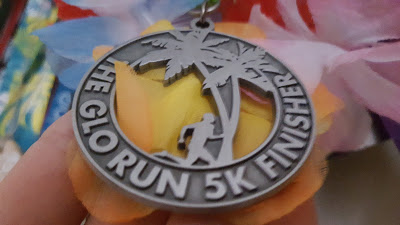 I paid the extra fee to get chip timed bibs and a finishers medal. Why? Because this kid is 10 and enjoys them. I forgot to mention that we do these races every year as part of his birthday gift, and although I don't typically care about medals for anything less than a half marathon, for him a 5k is a big deal. Worth every penny if you ask me.

As promised, we headed back to the Pineapple for pictures.. probably more for me than Adam, but no shame.

Did I mention they changed colors?!?! You can also see that Adam also got the goofball genes. 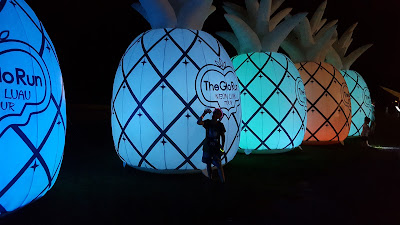 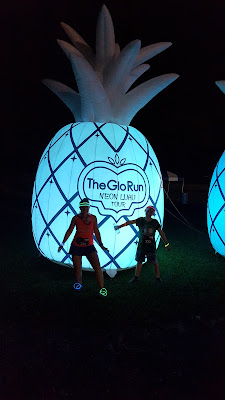 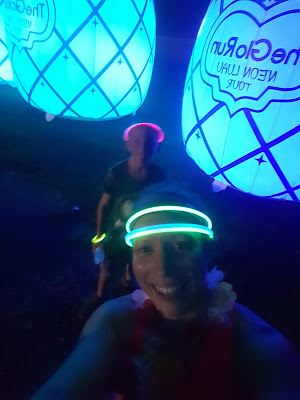 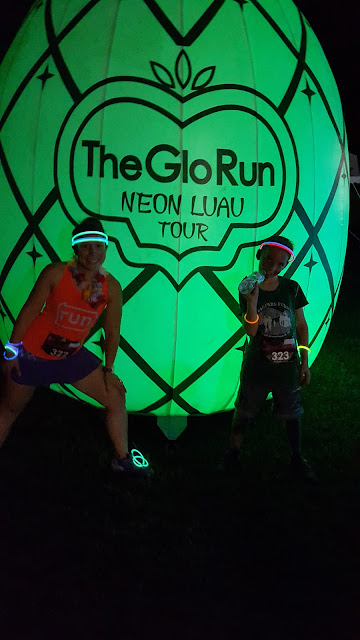 Bottom line is we had fun and Adam said he liked it more than the one we have done in previous years. Because we wrapped around and through the fairgrounds, he liked that it was easier to follow where you were going and said he would do it again. Plus, pineapples. Okay, maybe I said that last part. We did have fun and there are plenty of discount periods so that you never have to pay the ridiculous $70 full rate. It will be completely up to him, but looks like we will probably go back next year.

I know a lot of people make fun of novelty races like this, but it gives me chance to spend 1-1 time with Adam and he thoroughly enjoys it. Anything that gets kids involved in running is an A in my book and the fact that he participates as part of his birthday gift from us every year is even better.

What do you think about novelty races? Love 'em or leave 'em?