At the beginning of the year, I set a few really crazy goals and set out to achieve them. I don't think I ever really wrote much about any of them because, to be honest, they were SUPER scary to me. Mostly because I wasn't sure how my body would hold up knowing that during the last two fall training cycles, I ended up with KT Tape holding me together. I was scared that I would sign up for races with these amazing mileage goals and my body would refuse to participate. 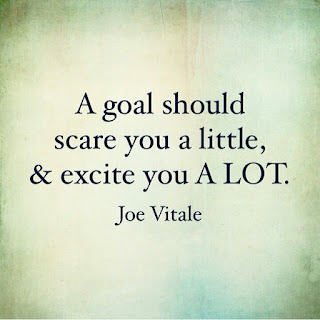 I asked around and did some online "research" for quick exercises that I could do to try to prevent a repeat for the third year in a row. I wanted to make these scary goals attainable, but knew it was unrealistic to think I was going add in additional 30 minute long training sessions on top of all the running I would be doing.

Thankfully, leading up to last weekend my body felt great. It might sound a little pompous, but I felt really strong and confident. For me, this is a HUGE change from last year as I prepared for Blues Cruise 50k, I was just hoping that my body would make it through that race after fighting pain in various areas all fall. Going into Labor Pain 12 hour race kind of care free felt so strange. I even asked a few friends if it was weird that I wasn't really nervous about it. I felt like should have been freaking out knowing I was attempting to run anywhere from 13-17 miles longer than I ever had. I was assured that I had put in the work and that as long as I was confident, I could focus on and achieve the goal. That made me feel better. I am pretty sure I was more nervous about running the pesky Harrisburg Mile earlier this summer. Weird runner logic. 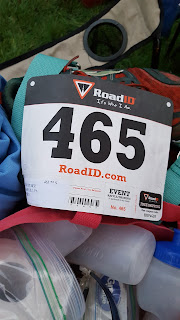 Enough of the blah blah, just get to the point right?

So as many of you know by now, I ended up running 45 miles Labor day weekend at Labor Pain 12 hour Ultra, but I wanted to take some time to recap the experience of getting there. I am not even sure I know where to start, but here goes.

I met my darling friends (Bekah and Brad) before the butt crack of dawn, and by this I mean slightly before 5am. We loaded up the car with way too many supplies.. just in case.. and we drove the hour-ish drive to Reading. We got to catch up on life a little and before we knew it we had arrived. Unfortunately, it was still raining but we had to get our "camp" set up anyway. Bekah had a pop up tent that came in handy to keep our stuff dry! 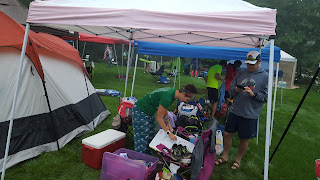 Once we were all set up, we got our race bibs and goodies and then started to get ourselves ready to run! First priority was, of course, a selfie (groupfie?)! 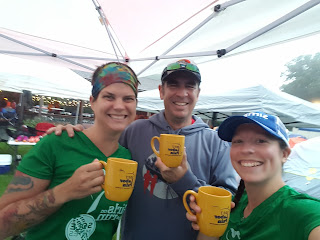 We ran into another person from our group a little later and took another! 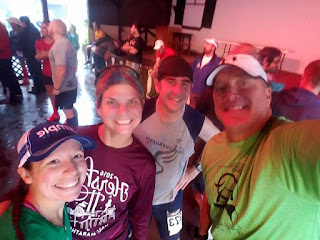 The race started with the "meeting" where the race director gave us important (or just funny) information about the course. Ron from Pretzel City is famous for his crazy jokes and this speech was full of them. Nothing like starting out a race with a ton of laughter.  The race consisted of running as many 5 mile loops as you wanted to or could in the 12 hour period.

I ran most of the first loop with Bekah and Brad close by. It was definitely humid and took a while for my body to get warmed up, but once I did it felt good to be running. Parts of the course were a bit clogged the first loop and made me wish we had started a little further up in the start line, but lesson learned for next time. The muddy sections of the course were challenging and made us a little nervous about what the course would look like in a few hours. 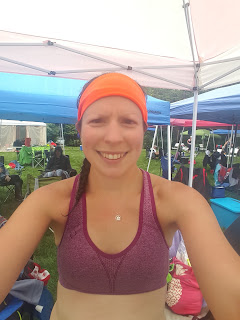 
Upon returning to the tent the first time, I refilled my water bottle and that was really about it. Bekah and I made a quick stop at the bathroom and then hit the road for loop 2. There is actually a point where you kind of cross paths with runners nearing the end of the loop and I got to see a previous professor of mine and yelled out to him as we passed.  After a little while, I did end up running past Bekah and we didn't know where Brad was at that point. I think I saw Bekah before loop 3, but honestly can't even remember. I do know that I didn't see her again until she had completed her 50k and was relaxing.

I quickly realized that I was consistently passing the same woman in the first half of every loop. By the 4th loop, I finally asked her what her name was and she told me Iris which was short for something longer and beautiful that I cannot remember. She had run the Patapsco 50k earlier this year as her first and she, like myself, was hoping for anything above 40 miles that day. I was so glad I introduced myself as we became beacons for each other loop after loop. 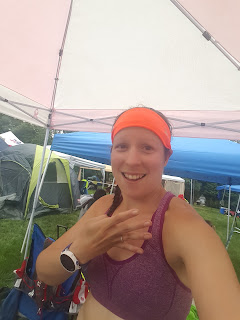 When I got returned from my 4th loop and found Rick before the finish line shoot, I was pretty excited. He had told us he would come up around lunch and pace us each for a loop. Honestly, I kind of lost track of what time it was and was surprised he was there already. Although I was only 4 loops in, it was exciting to see a familiar face waiting. Another thing I know was how bad-ass I felt every single time I came up over the rocky bank and back to the main area. EVERY TIME.

I decided now was a good time to change my socks since I was 20 miles in and they were rubbing a little much on the insides of my big toes. Fresh socks and a new coat of skin glide and I was ready to go. Rick saw another friend of his who he was going to run with and asked if I minded if he went and joined him. Of course it was no biggie, but as it turns out, his friend was almost done with his 50k and I saw Rick again as I was starting my loop.

Rick entertained me as he sang and joked while we ran and the miles flew by. Before I knew it, we were back at the tent and were able to see when Bekah and Brad had last come through. We decided early on that we would write the time we arrived at the tent so that we could easily keep track of who was where. We also tallied our loops so we wouldn't get confused. Sounds dumb, but you'd be surprised.

On to loop 6 and I was still feeling great. I rolled into the aid station at the half way point and was surprised to see Brad. Rick and I had guessed I might catch him at some point and there he was. We grabbed snacks and chit-chatted a little before I took off running. I always enjoyed the second half of the loop since I could more consistently run then that first half. I knew that once I hit the aid station, it was time to crank it up a little. Thankfully, this remained mostly true through the entire day. 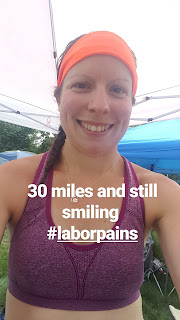 Remember Iris that I mentioned earlier? Around loop 7, I hadn't caught up to her and we were almost to half-way aid station. I finally saw her and said hello. She told me she was so glad to see me. The crowd was thinning out and I was happy to see her too. To me, running trail is all about these connections made with other runners. It was so nice that among so many strangers, I had a familiar face to look forward to every loop. Loop 7 was also super special because I officially passed my 50k distance and I might have gotten a little teary eyed for a hot second. This was especially exciting when I realized how I felt so much better than when I finished that distance last October. 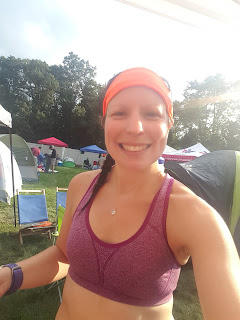 40 miles and hungry for more

When I finished loop 8, everyone was back at the tent, including 2 of the guys that were also from our area. I was tired and getting sore, but I was ready to grab one more loop. It was such a great energy pump to see my running partners in crime before I took off. I had some food, refilled my bottle for one last time (really, Rick did) and then took off walking a bit. I had definitely stiffened up in the few minutes standing there, so I had to ease back in. Once I got started, I felt so much better. The loop did not feel EASY, but also didn't feel like death as I had once anticipated. I just kept thinking "Man, those crazy ultra runners of mine were right. This is all mental. Your body really hits a certain level of sore and that's it. They didn't lie to me." 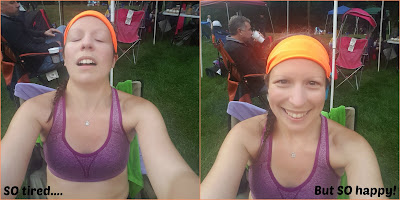 I am still amazed that I ran 45 miles and felt strong up to the end. Never in my wildest dreams did I think I could feel like that after over 11 hours on my feet. The muddy course did continue to be a challenge throughout the day, but some areas became sticky instead of slippy so that was helpful.

It was great to have a nice group of fellow crazy runners there to cheer each other on from loop to loop and celebrate each other's accomplishments. 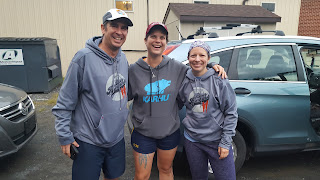 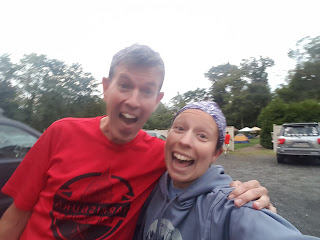 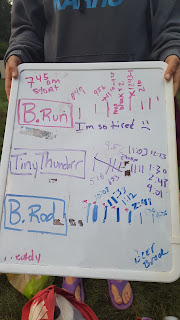 Will there be a next time? Absolutely!! Will I try to get some other people to come along next year? Already on it. This was such a fun day of challenging myself and just really testing my strength and ability to run for hours on end. I felt strong for far longer than I ever thought possible and feel ready for the next scary goal before the end of the year!!

What goal have you set lately that REALLY scared you??